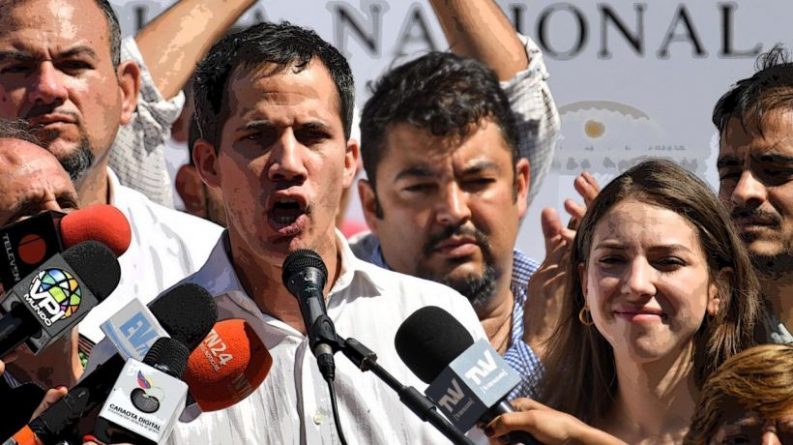 This Thursday, March 21, Juan Guaidó’s chief of staff, Roberto Marrero, was arrested by the Bolivarian Intelligence Service (SEBIN) for having committed “crimes that imply the violation of the constitutional order and the promotion of terrorism and violence, including the attempt to assassinate the Head of State, “according to a statement from the Venezuelan Public Ministry.

His arrest, in addition, was made following an arrest warrant of the First Special Court of First Instance of Caracas and was assisted by prosecutors from the Public Ministry and witnesses, also according to this statement.

RELATED CONTENT: Over $30 Bln Stolen From Venezuela ‘at Trump’s Request’

The Minister of the Interior, Justice and Peace, Néstor Reverol, informed a press conference that during the raid on Marrero’s house, two assault rifles and currency in cash were seized. According to Reverol, the chief of Guaidó’s staff, was leading a “larger group, fully identified, which planned selective assassinations of high-profile figures of the Venezuelan State, and attacks on the country’s public services.”

This Saturday, the head of the Communication Ministry, Jorge Rodríguez, expanded this revelation by denouncing the formation of groups of eight to ten teams of assassins, brought from Nicaragua, Honduras and El Salvador; this last country epicenter of the recruitment operation. According to Rodríguez, these groups were trained in Colombia to carry out terrorist acts in Venezuela.

At least half of these groups entered Venezuela already, while the others did not because of the closure of the border, Rodríguez said. Its objectives were the assassination of social and political leaders of the Bolivarian Revolution, as well as new sabotage to the Electric System, the Caracas Metro, the Caracas Cable Car, under the false positives modality when performing them as if they were deserters of the Bolivarian National Armed Forces (FANB). Rodriguez also said that the intention was to pass these mercenaries off as “military deserters” to project the existence of a conflict between Venezuelans.

HOW WERE THESE GROUPS PAID?

The minister, on the other hand, revealed that among the items seized from Marrero are cell phones that allowed access to the chat conversations of Guaido’s Chief of Staff. There is a series of important findings regarding the organization of these groups, composed of between six and eight people each, and the objectives for which they would be used.

According to what Marrero told to Guaidó, the recruiter of the group, called “Roxana de Cúcuta”, received between 500 and 700 thousand dollars per day to pay these assassins and try to have military deserters join them. The money was deposited through Briefcase NGOs in accounts of “Banesco Panama” and “Bank of America”, whose numbers are clearly identified in these conversations. According to Rodríguez, those briefcase NGOs were created between January and February by the government of Iván Duque after Juan Guaidó asked him to do so.

In the conversations between Guaidó and Marrero, in addition, it is implied that the money deposited comes from the companies of the Venezuelan State seized by the US, such as the one between the government of the Dominican Republic and PDV Caribe, owned by the state PDVSA. The money that they expected to steal to finance this operation is estimated to amount to a total of 1 billion dollars. Guaidó, for these financial intelligence operations, appointed Juan Carlos Planchard, who is now wanted by the Venezuelan justice system and according to reports is a Legal Director in Rosneff Venezuela.

In this context, the minister announced that the plotters of this plan are identified and reported the capture in the Carabobo state of Wilfrido Torres Gómez, alias Neco, head of the Colombian paramilitary group Los Rastrojos. According to Rodríguez, Torres Gómez is one of the leaders of these groups of assassins, while he specified that they are in search of the main street operator of these terrorist cells, nicknamed “El Agricultor”.

THE GENERAL STAFF AND OPERATION FREEDOM

On Marrero’s phone, conversations were also found in a group called “the General Staff”, made up of members of the Voluntad Popular party. Among them, Leopoldo López is identified as the leader (and with a court no phone call order); Freddy Guevara, in charge of advising on Guaidó’s discursive line; Marrero, the deputies Freddy Superlano and Sergio Vergara, and Juan Guaidó himself.

From the dialogues found in this device, a statement is highlighted by Freddy Guevara on Operation Freedom (Operacion Libertad) recently called by Guaidó for the coming months. According to Guevara, antichavismo aims to “move from a strategy of siege to one of assault” articulated with selective assassinations and attacks against public services.

In a slide, Jorge Rodríguez showed how Operation Libertad contemplates:

This revelation is little different from the statements of Guaidó this Friday, March 22 in El Tigre, Anzoátegui state, where he said: “Venezuelans do not beg for our rights, so soon we are going together to Miraflores to rescue the office of all Venezuelans.” Under this logic, the self-proclaimed told his followers that “we must organize because the dictator will not go out kindly.”

In recent days, on repeated occasions he has spoken in favor of asking for a military intervention and blamed the Bolivarian Government for raising the “costs” instead. Quite well known also is his statement that the death of Venezuelans, in pursuit of a change of government, is “an investment in the future”.

On the other hand, this is not the first time that the opposition hires Colombian and Central American gunmen. Similar episodes are remembered after the presidential elections of 2013 when Salvadoran mercenaries were arrested, and before the march of September 1, 2016, known as the “mother of the marches”, when groups in charge of violent actions to press for a recall referendum, were dismantled .

Also the denunciations of the Bolivarian Government about the failed assassination and two coup attempts in 2018 were corroborated by the Bloomberg and New York Times media in recent days. One of the last was communicated by President Maduro in December 2018 when he stated that the United States was training a group of mercenaries in Colombia and Special Operations forces in a base in Florida to start an irregular conflict in Venezuela. The facts confirm that the antichavismo awkwardly continues stubbornly to fulfill this mandate of Washington without still having any success.