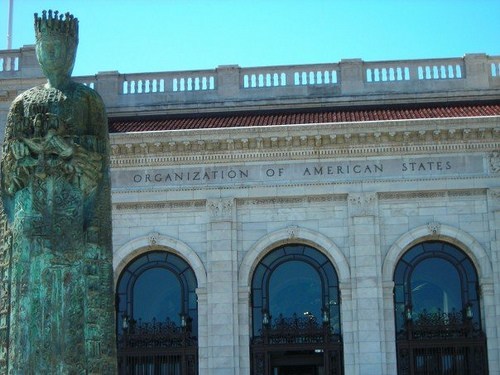 In a legally dubious attempt to legitimize Juan Guaido’s shadow regime, the US pushed to install a neoliberal operative implicated in an alleged Maduro assassination plot as Venezuela’s Organization of American States ambassador.

It was just the latest attempt to legitimize Guaido’s shadow regime by an increasingly anxious Trump administration flustered by the failure of the coup it set into motion this January 5.

Tellingly, when I pressed the US ambassador to the OAS, Carlos Trujillo, to specify what gave the council legal authority to recognize Gustavo Tarre as Venezuela’s new representative, he was unable to offer a coherent explanation.

Trujillo announced the special meeting to discuss the situation in Venezuela after it was requested on April 8th by the Permanent Missions of Colombia, Chile, Paraguay, Brazil, Argentina, Peru, and Canada. The request was submitted alongside a draft resolution accepting “the appointment of Mr. Gustavo Tarre as the Permanent Representative” of Venezuela and instructing OAS Secretary General Luis Almagro to “transmit the text of [the resolution] to the Secretary General of the United Nations.”

Five of the eighteen countries that voted for the US measure were recently taken over by pro-IMF governments (Argentina, Ecuador); hit by soft-legislative coups aided by Washington (Brazil, Paraguay); or targeted by direct US regime change operations (Honduras) during the Obama years. Haiti, which saw its democratically elected President Jean-Bertrand Aristide removed in a US-backed coup in 2004, recognized Guaido in order to secure Washington’s support amidst widespread popular unrest.

In 2014, he was publicly implicated in an alleged plot to assassinate Venezuelan President Nicolas Maduro.

Representatives from countries that criticized the resolution were quick to charge that it violated both the spirit and the letter the OAS Charter. That binding document affirms that “American States established” the organization in order to “to promote their solidarity, to strengthen their collaboration, and to defend their sovereignty, their territorial integrity, and their independence.”

Within the OAS, the Permanent Council’s duty is to “keep vigilance over the maintenance of friendly relations among the Member States” and “assist them in the peaceful settlement of their disputes.” What’s more, nowhere in its charter is the OAS granted authority to recognize nor deny the legitimacy of the governments of any given member state.

“What gave the Permanent Council the authority to make this decision?” the Grayzone asked Ambassador Trujillo as he exited the meeting. “Shouldn’t this only be a decision only made by the General Assembly?”

“I’m sure it will be revisited at the General Assembly,” Trujillo replied, deflecting the question.

On Tuesday I observed the OAS brazenly violate its own rules in order to recognize Guaidó’s ambassador & appease the Trump admin.

I asked US Ambassador Trujillo to explain the vote’s legal basis.

He was unable to cite a single article in the OAS charter. pic.twitter.com/UWUQg99E67

The General Assembly, according to the OAS Charter, is the organization’s “supreme organ” and therefore the primary body tasked with “determin[ing] the structure and function” of the institution. By rushing this resolution through the Permanent Council, where only a simple majority of eighteen votes was needed for it to pass, the US and its allies avoided having to collect the 24 tallies needed in order to clear the two-thirds majority required at the General Assembly.

Ambassador Trujillo insisted that I was incorrect in asserting the day’s vote at the Permanent Council was illegal, so I implored him to define its “legal basis in the Charter.”

Apparently unaccustomed to a challenge from the press, Trujillo struggled to muster a response: “Article, article, yeah in the Charter. And a lot of resolutions are pending the decision by the General Assembly.”

So what was the article in the charter that provided Trujillo with legal authority? He couldn’t say.

One problem with Trujillo’s prediction of General Assembly consent is that by the time member state foreign ministers gather for the next session this June, Venezuela will have already withdrawn from the OAS.

“This day means the end of a chain of violations and traps that, in order to turn the OAS into a weapon against Venezuela, has ended up destroying the entire structure of international law that sustains it,” Asbina Marin, Venezuela’s actual representative to the OAS, announced.

Marin added: “This house, the OAS, has become uninhabitable.”

“In arriving at this resolution, this essential test of international law has been ignored”

Caracas undoubtedly reached this conclusion some time ago. In April 2017, then-Foreign Minister Delcy Rodriguez announced Venezuela’s withdrawal from the OAS, a two year process which will be finalized on April 27th of this year. The fast-approaching deadline suggests this latest effort by Washington and its allies may have been a symbolic, last minute attempt to kick Venezuela’s elected government one last time before it heads out the door. Still, the disturbing precedent established by the resolution was not lost on other OAS member states.

“The so-called doctrine of 18 votes has been instituted,” lamented Mexican Ambassador Jorge Lomonaco, “which has generated the precedent that a subsidiary body can question, with only 18 votes, sovereign decisions.”

His warning was echoed by Ronald Sanders, Antigua and Barbuda’s Ambassador to the organization, when he warned that “the presentation of this resolution is part of a disturbing trend in which any simple majority of eighteen member states can impose their will on all other member states.”

“It ignores the rules of the permanent council,” Sanders added, “and the Charter for the Organization of American States.”

Though the US’s Trujillo may not have remembered, the resolution relied on Article 80 of the OAS Charter and Article 3 of the statuses of the Permanent Council for its flimsy legal basis. Each article deals with the question of representation at the OAS, with Article 80 stating “the permanent council of the Organization is composed of one representative of each member state.” The statuses of the Permanent Council stipulate, meanwhile, that “the government of each member state shall advise the Secretary General of the appointment of its representative.”

In other words, thirty five ambassadors serving on the permanent council are appointed by the thirty five governments of each members state.

For this reason, according to Sanders, “the fundamental point at issue in this resolution… is recognition of governments, and the criteria for doing so.” The ambassador noted “in international law and practice, such recognition is based on the test of who is in charge of the country, who administers its affairs, [and] who controls its borders.”

Considering that Guaido’s shadow regime does not fit any of these categories, Ambassador Sanders concluded that, “in arriving at this resolution, this essential test of international law has been ignored.”

Antigua and Barbuda therefore joined Venezuela in rejecting the measure.

Opposing countries were not alone in their strong condemnation of the resolution. While Guyana abstained from the final vote, the country’s ambassador, Riyad Insanally, proclaimed that the measure would “set a dangerous precedent and ultimately damage irreparably the institutional framework of the OAS, belying the claim that this is the premier political forum of the Americas.”

Like Sanders, Insanally argued the OAS’s “acceptance of a representative suggests the recognition of a particular government,” and that “in international law there is no collective recognition of a government; that is the sovereign right of the state.”

Given that Venezuela’s sovereign government already planned to leave the organization and that Guaido’s coup regime wields no real power domestically, the actual impact of the vote remains unclear.

“When this debate is over and the votes are cast, individual governments will still determine, as is their right, what governments they recognize,” remarked Ambassador Sanders. “Nothing will have changed. What it will achieve is an organization overwhelmed by suspicion and crippled by a failure to adhere to its own ethos to build consensus on major decisions.”

Ambassador Lomonaco of Mexico offered a similar forecast, asserting, “the adoption of this resolution is a pyrrhic victory for a group of countries, without real effects and with potentially negative consequences for the OAS and its institutionality.”

From Caracas, Venezuelan Foreign Minister Jorge Arreaza denounced the vote as “one of the most unfortunate decisions made in the long history of legal and political outrages of this organization, and a vulgar manipulation of blackmail and pressure against the member states to satisfy the desires of Washington’s neo-Monroe politics.”

“Venezuela can not remain in an organization kneeling to imperial interests and supremacists of the US administration,” he concluded.

It may ultimately be the case that the resolution’s success said more about the viability of the OAS as a serious governing institution than that of the Maduro government. As the failure of Washington’s coup attempt becomes more apparent with each day, the Trump Administration’s bids to legitimize the Guaido shadow regime turn more frantic and meaningless.