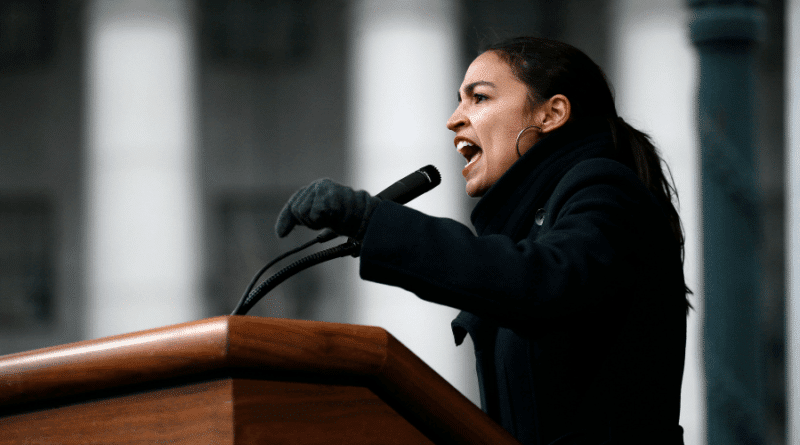 “Congress now has a moral and legal obligation to reassert its power to stop this war and protect innocent people from horrific consequences.”

Progressives on Friday, including Rep. Alexandria Ocasio-Cortez, called for Congressional action to rein in the administration after a drone strike ordered by President Donald Trump killed Iranian military commander Qasem Soleimani, a move seen by observers as an act of war that is nearly certain to exacerbate a historically tense moment in the Persian Gulf region.

“Right now is the moment to decide if you are pro-peace or not,” tweeted Ocasio-Cortez, a New York Democrat.

Last night the President engaged in what is widely being recognized as an act of war against Iran, one that now risks the lives of millions of innocent people.

Now is the moment to prevent war & protect innocent people – the question for many is how, publicly & Congressionally:

“Congress now has a moral and legal obligation to reassert its power to stop this war and protect innocent people from horrific consequences,” the congresswoman added.

Ocasio-Cortez joined a growing chorus from the left urging restraint and diplomacy from the U.S. and Iran.

“There is no military solution to this crisis,” Reps. Mark Pocan (D-Wis.) and Pramila Jayapal (D-Wash.), co-chairs of the Congressional Progressive Caucus, said in a statement. “Instead, we must pursue meaningful diplomacy to achieve peace and stability in the region.”

There is no military solution to this crisis — instead, we must pursue meaningful diplomacy to achieve peace and stability in the region.

Jayapal added in a tweet that Soleimani’s killing “dangerously doubles down on reckless military brinkmanship.”

The attack on Soleimani, one of the leaders of Iran’s Quds Force and a major figure in the Iranian government, and Iraqi militia leader Abu Mahdi al-Muhandis came on Friday morning near the Baghdad airport.

By striking the Iranian leader, Ploughshares Fund director of programs Michelle Dover told Common Dreams in an email, the U.S. “has imperiled any near term chances for diplomacy.”

“The primary question now is whether the U.S. government is prepared for the Iranian response,” said Dover. “The U.S. public should be calling on Congress to assert its authorities and oversight roles to prevent an unintentional slide into war.”

Rep. Barbara Lee (D-Calif.) in a statement called for peace and noted that the Authorization for the Use of Military Force (AUMF), first passed by Congress in 2001 days after the 9/11 attacks with Lee as the sole dissenting vote, was used by the White House as the justification for the strike.

“We must work to prevent further military action in the region,” said Lee. “We have known for years that there is no military solution, and it’s past time to return to a diplomatic strategy with our allies. We must protect our national security, our brave troops, our allies, and the American people.”

Lee included in the 2019 National Defense Authorization Act (NDAA) an amendment which would have repealed the AUMF, but, as Rep. Ro Khanna (D-Calif.) pointed out on Twitter, that language was stripped from the final bill delivering the president billions in war funding, which passed Congress with bipartisan support.

There were two amendments stripped from the NDAA that could have prevented tonight's escalation.

My amendment to prevent funding for war with Iran without Congressional approval.@BLeeForCongress's amendment to repeal the 2001 AUMF.

“Congress is the only branch of government that has the constitutional power to decide where and whether to send U.S. forces into harm’s way,” the group said. “We urge you to act immediately to stop a catastrophic war with Iran.”

The Nation’s Jeet Heer warned Friday that Congress has not been known recently for its bravery in the face of war-time presidents.

“Trump’s petty motives and incoherent policy have been enabled by a Congress that has long been derelict in its duty to provide oversight over foreign policy,” said Heer. “This abdication of responsibility is all too typical of American politics since the 9/11 terrorist attacks—under both Democratic and Republican presidents.”

There is no justification for starting a war w/ Iran.

We can't allow Trump to thrust us into another costly & deadly war.

In a statement to Common Dreams, Alliance for Peacebuilding president and CEO Uzra Zeya said that the correct response to the continuing tensions is trying to find a way forward without violence.

“We must reject retribution and military action towards all-out war that endangers the future of Iranians and Americans alike,” said Zeya. “Peacebuilding—in the form of de-escalation, dialogue, restraint, and diplomacy—is now more important than ever.”