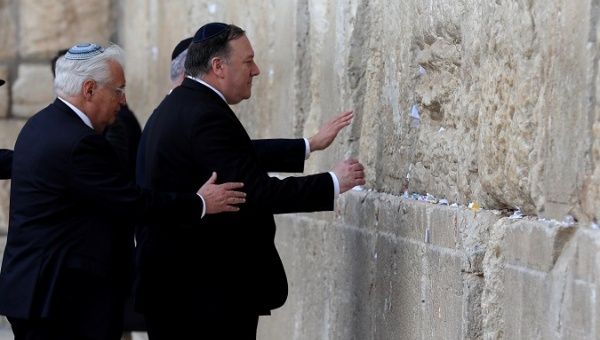 “I am confident that the Lord is at work here,” the former CIA director and Kansas senator added.

United States Secretary of State Mike Pompeo proclaimed Thursday that “The Lord is at work here” regarding Trump’s meddling in Middle East affairs between Israel and Iran, in an interview with the Christian Broadcasting Network.

The question posed, which reveals as much about the interviewer as it does the politics of the religious station, was whether “President Trump right now has been sort of raised for such a time as this, just like Queen Esther, to help save the Jewish people from an Iranian menace.”

“It was remarkable… the work that our administration’s done to make sure that this democracy in the Middle East, that this Jewish state remains. I am confident that the Lord is at work here,” the former CIA director and Kansas senator added.

The interview came on a Jewish holiday celebrating rescue from genocide, Purim. The holiday, in which people dress up in costumes as alter egos and in masquerade fashion, celebrates Queen Esther’s rescue of Jewish people from Haman, who was planning to kill them all in a biblical story which took place in the ancient Achaemenid Persian Empire.

RELATED CONTENT: They Need Guaido in Jail to Revive the Coup Plan

Pompeo made the comments while on a high-profile tour of the region where he was criticized for inviting only “faith-based” members of the media to a conference call.

On Thursday, U.S. President Donald Trump announced U.S. policy was changing toward the Golan Heights, saying that the Syrian territory occupied by Israel since 1967 ought to be recognized as part of Israel.

“After 52 years it is time for the United States to fully recognize Israel’s Sovereignty over the Golan Heights, which is of critical strategic and security importance to the State of Israel and Regional Stability!” The president tweeted.

“He did it again. First, he recognized Jerusalem as Israel’s capital and moved the embassy here,” Netanyahu said. “Then he pulled out of the disastrous Iran treaty and reimposed sanctions. But now he did something of equal historic importance: he recognized Israel’s sovereignty over the Golan Heights.”