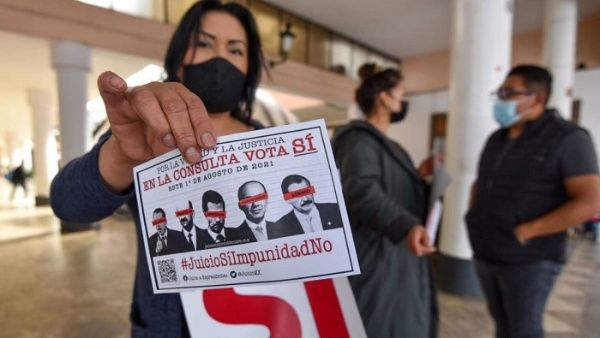 For the first time in the history of Mexico, the Popular Consultation Law will create a direct mechanism for citizen participation in policy making.

On Sunday, August 1, millions of Mexicans will take part in a referendum that could bring five neoliberal-era presidents to trial.

For the first time in the political history of the nation, the Popular Consultation Law will create a direct mechanism for citizen participation in policy making.

This referendum has been actively promoted by President Andrés Manuel López Obrador (AMLO), whom the Mexican right wing accuses of carrying out “leftist propaganda” for putting the decision on a “technical” and judicial issue in the hands of the common people.

Two laughable covers from @TheEconomist and @TIME trying to normalize the pillaging of the Mexican economy and keep the corpse of neoliberalism going even as the global north has to pull away from it to jumpstart it’s economies. All they want is Mexico’s energy and lithium pic.twitter.com/llwm6cvmnf

The consultation process
The Federal Law of Popular Consultation defines popular consultations as a mechanism for citizens, through the popular vote, to participate directly in the decisions of the public authorities of Mexico.

According to the Constitution, popular consultations can be called by the Federal Congress at the request of: the president of the nation; 33% of the total number of members of the two chambers of the Legislative Assembly; or at least two percent of the total number of citizens registered in the electoral roll. These petitions must be approved by a majority in each house of Legislature.

In order for the consultation to be binding and its result to lead to mandatory executive and legislative actions, at least 40% of the people registered in the voters’ registry must participate in it.

After having been reviewed by the Supreme Court (SCJN), the question of Sunday’s referendum will be: “Do you agree or disagree that, under the laws and the Constitution, pertinent actions be carried out to undertake a process of clarification of the political decisions made in the past years by the political actors, which is aimed at guaranteeing justice and the rights of the possible victims?”

In Mexico, such consultations have been held at local levels, but this is the first time in the history of the country that a consultation is being held at the federal level.

Electoral ban has been enforced in Mexico since July 15 and it will remain in force until August 1; therefore, during this period, no elected representative can advertise anything regarding the consultation on radio and television to influence public opinion.

Details of the voting procedure
According to the INE, 93,597,559 persons are registered in the electoral roll, so the consultation will require the participation of a minimum of 37,439,023 voters to become binding.

As the consultation is taking place in the midst of a rise in COVID-19 infections throughout the country, the INE has reiterated the obligation to use masks and maintain physical distance, among other preventive protocols.

Once the electoral process is concluded, the INE General Council will count the votes for and against the above mentioned question. The result will be subsequently communicated to the Supreme Court.

The numerical results of the vote should be ready between August 1 and 2. However, the validity of the procedure may be declared a few days later, allowing for a period for resolution of complaints about the procedure, if any.

RELATED CONTENT: Arreaza: Mexico Ensures that CELAC Does Not Meet the Same Fate as UNASUR

Attacks from the Mexican right wing
Social organizations have already denounced the INE for trying to hinder the consultation and carrying out actions to dissuade participation.

Among the complaints, there is the fact that the national electoral authority presented obstacles to the budget destined for the electoral procedure, and subsequently has reduced the number of polling stations, which in some cases would force voters to travel larger distances from their residence to be able to vote.

The hegemonic media, for decades favored by and favorable to the right wing, have also attacked the initiative, presenting it as the result of “a discourse of hate” by President López Obrador and not as an effort in favor of transparency and honesty of public officials and institutions.

Despite facing all these attacks, the president has urged citizens to participate massively in the consultation.

If 40% of the over 93.6 million eligible voters vote in favor, Salinas de Gortari, Zedillo, Fox, Calderón, and Peña Nieto could be subject to trials involving crimes ranging from corruption to human rights violations.

Featured image: A woman shows a leaflet explaining the scope of the Popular Consultation. Photo: Cuartoscuro