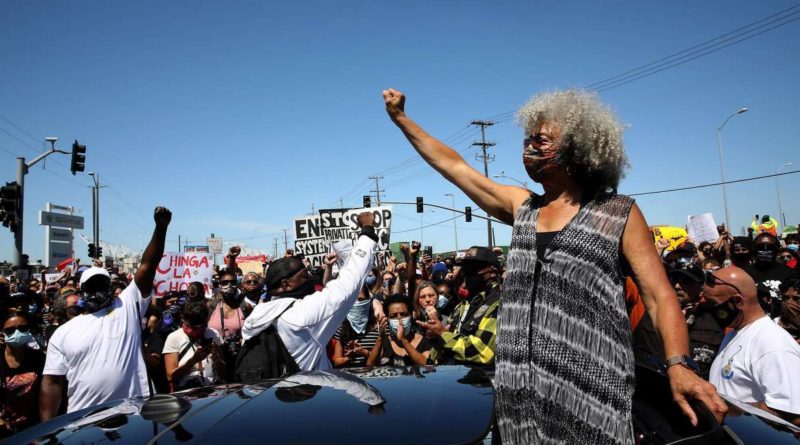 All 29 ports on the West Coast were shut down on June 19 as dockworkers stopped processing cargo and rallied to mark Juneteenth by calling for an end to police terror and to honor the lives of George Floyd, Rayshard Brooks, Breonna Taylor and all the others killed by racist cops.

The epicenter was at the Port of Oakland, Calif., where the strike had been initiated by International Longshore and Warehouse Union Local 10.

Ten thousand workers and supporters rallied to hear labor leaders like Willie Adams, the first Black president of the ILWU, who said: “We’re not working today. We’re standing in solidarity.” He said dockworkers in Genoa, Italy, had also stopped work in solidarity.

“You represent the potential and the power of the labor movement,” Angela Davis, a longtime activist and former political prisoner, said at the rally. She said she hopes that other labor unions will join in the effort of “abolishing the police as we know them” and “re-imagining public safety.”

Other speakers included actor Danny Glover, who called in to voice support, and Michael Brown Sr., father of Michael Brown Jr., the 18-year-old Black man who was killed in 2014 by Ferguson, Mo., police officer Darren Wilson.

RELATED CONTENT: States are Legally Required to Protect the Right to Vote

The protesters drove in a caravan and marched from the port to the Oakland Police Department headquarters and on to Oakland City Hall to rally again. The marchers wore masks and volunteers handed out water and hand sanitizer.

The mood in downtown Oakland was exuberant as cars honked, music by James Brown played and over 100 bikers sped up and down Broadway with raised fists. A troupe of drummers performed in front of City Hall starting around 1 p.m. as the crowd swelled to thousands more around nearby Oscar Grant Plaza, named for the Black man killed by Bay Area Rapid Transit (BART) police officer Johannes Mehserle on New Year’s Eve 2009.

Rapper and film director Boots Riley said in front of Oakland City Hall that the port work stoppage and other labor efforts would maintain pressure for meaningful change.”We don’t want to just ask for things to get better. We’re going to say, ‘It’s going to get better or else,’” he said.

Gwendoline Pouchoulin displayed homemade signs that said “All Black Lives Matter” and a quote from author Alice Walker: “The most common way people give up power is by thinking they don’t have any.”

Featured image: ‘You represent the potential and the power of the labor movement,’ said Angela Davis.