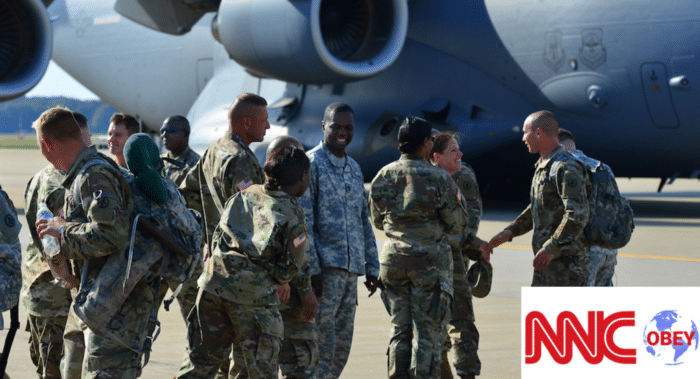 The Trump administration has begun slashing the US military presence in Germany from an almost satisfactory 36,000 troops to a practically microscopic 24,000. I think we can all agree that this is the single worst thing that has ever happened in the history of Germany, and arguably the universe.

While most Americans were until now unaware that their government had that many troops in a nation known predominantly for beer and bleak documentaries, pundits and politicians in the know have been rightly proclaiming their outrage at this catastrophic event which disrupts God’s natural plan of endless military expansionism until the entire planet is an undifferentiated sea of camouflage fatigues and tiny American flag patches.

“Trump’s decision to withdraw US Forces from Germany shows a broad lack of strategic understanding. It sends the wrong signal to our adversaries and leaves our allies vulnerable in the face of increasing global threats. It’s simply unacceptable,” tweeted former National Security Advisor John Bolton, who as we all know is always correct about military matters.

Trump's decision to withdraw US Forces from Germany shows a broad lack of strategic understanding. It sends the wrong signal to our adversaries and leaves our allies vulnerable in the face of increasing global threats. It's simply unacceptable https://t.co/5J0hyFnoMi

“Did Trump give Putin a heads up on the removal of 12,000 US troops from Germany? Was there an implication it was a kind of down payment for election help, a taste of what could follow in a second term?” asks super smart foreign policy expert Bill Kristol.

“US to withdraw nearly 12,000 troops from Germany in move that will cost billions and take years,” warns a CNN headline that is both helpful and totally sane.

RELATED CONTENT: Beijing Warns that the US Should Accept the Reality of a “Strong China”

NPR’s national security correspondent David Welna informs us that the move is “a slap at a longtime ally frequently reviled by President Trump.”

“There’s no strategy behind the decision to withdraw U.S. troops from Germany,” says Slate foreign policy pundit Fred Kaplan. “It’s about the president’s anger and ego.”

“The plan outlined by the Administration today to remove thousands of U.S. troops from Germany is a grave error,” said Senator Mitt Romney in a statement. “It is a slap in the face at a friend and ally when we should instead be drawing closer in our mutual commitment to deter Russian and Chinese aggression. And it is a gift to Russia coming at a time when we just have learned of its support for the Taliban and reports of bounties on killing American troops.”

“A special gift to Putin and a blow to NATO,” tweeted former National Security Advisor Susan Rice. “Donald Trump is not playing on America’s team.”

It is September 2020. Trump has decided to remove 500 troops from the middle of the Sahara Desert, a military presence nobody knew existed until one hour ago. All pundits and politicians in America are writing op-eds explaining why this is the worst thing that has ever happened.

So as you can see, this troop withdrawal is being met with righteous garment rending by all the best people. What more evidence do you need that we should regard endless military expansionism as the norm and treat even the slightest most peripheral deviation from that path as a freakish apocalyptic travesty?

I weep for the poor Germans, who are doubtless stricken with inconsolable terror at the loss of one third of their benevolent protectors. Who will protect Germany from being occupied by a violent and brutal regime without a robust occupying US military force?
I for one can’t wait until we get this evil, despotic monster out of the White House and replace him with someone who understands what America is really all about.

I for one can’t wait until we get this evil, despotic monster out of the White House and replace him with someone who understands what America is really all about.