President Nicolás Maduro, in his speech at the 76th session of the General Assembly of the United Nations (UN), condemned the fierce campaign against Venezuela unleashed by the elites that govern the United States, in complicity with power groups in Europe and other governments.

In this regard, he denounced the attack against Venezuela’s right to buy what it needs and the right to sell what it produces, like the great oil and mineral resources that exist in the Venezuelan territory.

“Venezuela denounces a permanent and systematic aggression through cruel economic, financial and oil sanctions, through a persecution against the right to freedom and economic guarantees that all the peoples of the world should enjoy,” stressed the Venezuelan head of state.

In his speech, President Maduro emphasized before the UN that the Venezuelan people have successfully resisted the attacks and are now moving from the phase of resistance to that of recovery of the economy and social rights which have been severely affected by the blockade. The president declared this “from the heart of this Caracas where the liberators of America were born.” 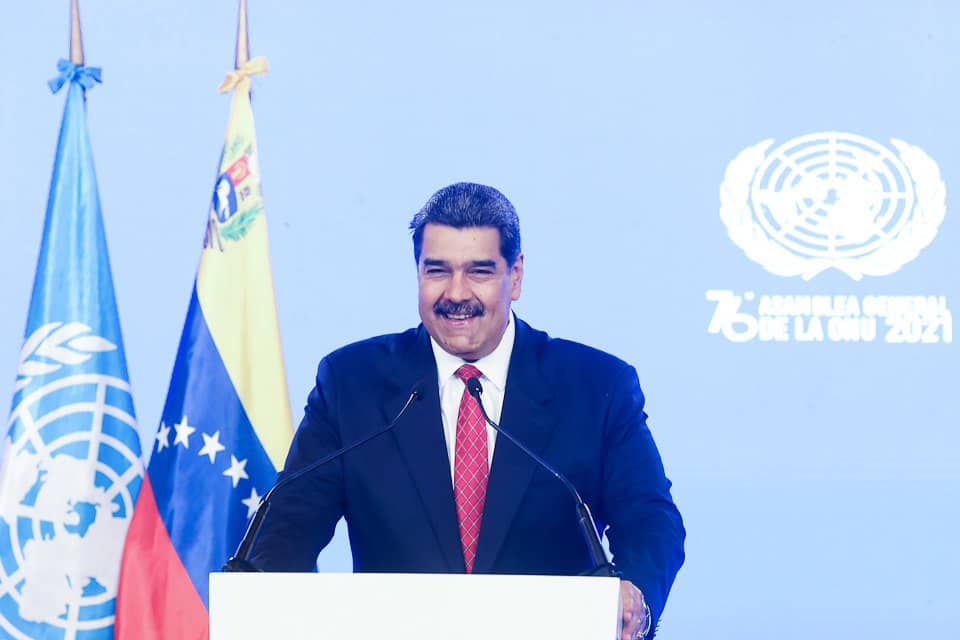 He advocated for the consolidation of an international system that is based on sharing, cooperation, a human community and shared destiny, as part of the pluripolar and multicentric world for which the Venezuelan government works together with all the peoples of the world.

The voice of truth
Maduro confirmed that Venezuela has brought to the forefront, on multiple occasions, the truth about what is happening in Venezuela, and has always condemned the fierce onslaught and campaign against the nation. For this reason, those who attack Venezuela “have wanted to instrumentalize the organizations of international law to justify criminal attacks against a noble people.”

As examples of this, he referred to the seizure of billions of dollars that belong to the Venezuelan State, in banking institutions in the United States, Europe and other countries, and that Venezuelan national companies are not allowed to hold bank accounts in international financial institutions to carry out commercial transactions freely.

“We are on the path of recovery and the integral growth of our nation, of the deployment of the productive forces of a country subjected to an infernal blockade, criminal persecution and cruel torture of its economic and social forces,” affirmed the president. In this way he demonstrated, before the peoples of the world, that it is possible to confront imperial aggression and advance with courage, determination and wisdom.

“That is why we ratify our request, our demand that all criminal sanctions against the Venezuelan economy and society be lifted, on the part of the United States of America and on the part of the governments of the European Union,” he continued.

He also said that he will circulate the results of the report of the United Nations Special Rapporteur Alena Douhan, who visited Venezuela for 7 days in early February and published an objective, crude and realistic document on the criminal effects of the illegal US and European sanctions. Maduro highlighted the recommendation of the UN expert, who has emphasized in her report that the sanctions should be lifted immediately, in respect of the rights of Venezuela as a sovereign country.

In defense of dialogue
In his speech, President Nicolás Maduro explained that the country is advancing towards the regional elections that will be held on November 21 to elect regional and local authorities. He also referred to the developments at the national dialogue between the government and the opposition groups, which is being held in Mexico.

He further explained that several meetings with different sectors have taken place this year, with special emphasis on the dialogue going on in Mexico City, hosted by the government of Mexico and accompanied by the Kingdom of Norway, Netherlands and the Russian Federation.

“It is a very important dialogue process that seeks to get the most extremist opposition sectors to return to politics, to the Constitution, to the electoral path,” stressed President Maduro. “I can say to the United Nations: we have achieved it.”

The president asked for all the support of the UN so that the dialogue process in Mexico advances towards new partial agreements and a global agreement that strengthens peace, sovereignty and the integral recovery of Venezuela.

Regarding climate change, he added that Venezuela ratifies its call for a rapid response and verifiable and effective action measures to stop the acceleration of the processes of deterioration of the ecological balance of planet earth.

He concluded that “a new world needs a new United Nations organization, so that we can all share life, solidarity and the right path necessary for a new community. Venezuela stands up, with its own voice, for that new world.”