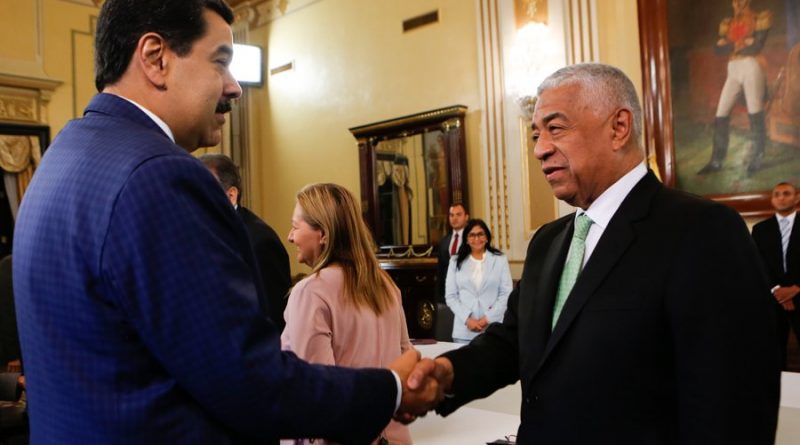 On Monday, the president of the Bolivarian Republic of Venezuela, Nicolás Maduro Moros held a meeting with representatives of opposition parties that make up the National Dialogue Table.

The meeting was held at the Miraflores Palace, in Caracas, in which the official sector was represented by the Vice President of the Republic, Delcy Rodríguez; the Ministers of Communication and Information, Jorge Rodríguez, and of Education, Aristóbulo Istúriz; as well as the head of the parliamentary faction of the Bloque de la Patria, Francisco Torrealba, while Javier Bertucci (Hope for Change) participated from the opposition personalities; Felipe Mujica (Movement To Socialism); Claudio Fermín (Solutions for Venezuela) and Timoteo Zambrano (Let’s Change the Citizen Movement).

“It is shown that here people do not want war, hate, street closures, burning people alive. People want matters to be settled in a peaceful and democratic way,” said Information Communication Minister Jorge Rodríguez, after leaving the meeting.

The senior official added that “the fundamental element is an element of national reconciliation, which goes through the recognition and voice of the victims.”

For his part, the representative of Solutions for Venezuela, Claudio Fermin, said it is important that the proposals to solve the crises of the country should be the result of agreements and not external impositions. “We do not want interference, we don’t want to underestimate the capacity to agree despite the differences we have”, said the leader.

The National Dialogue Table, which allowed the signing of agreements on political, electoral and economic matters, records progress related to the reinstatement of deputies of the Great Patriotic Pole (GPP) to the National Assembly (AN), setting substitute measures for freedom and initiation of process of renewal of the National Electoral Council (CNE).