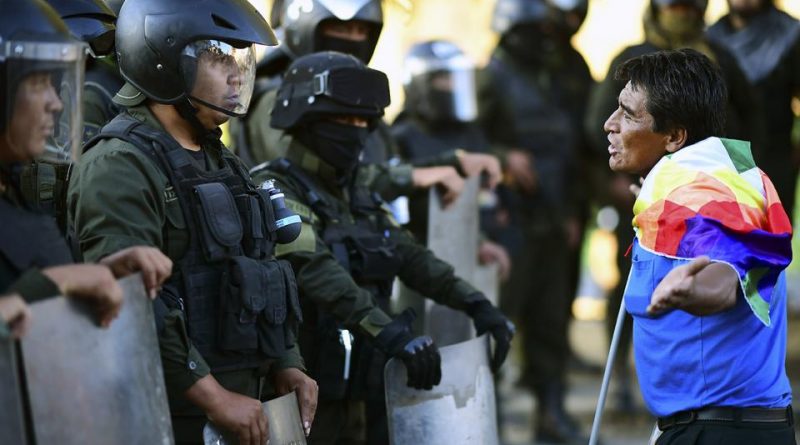 Military and police forces shoot at a crowd that blocks a fuel plant. Desperate pleas from the victims that what happens under the coup d’etat in Bolivia may be known.

At least six people died and another 22 were injured in the town of San Antonio de Senkata, El Alto, during a coordinated repression between the military Forces and the police to lift a blockade on a fuel supply plant. “I denounce to the world that the de facto government in the style of military dictatorships again kills my brothers in El Alto,” president Evo Morales wrote on his twitter account.

The protesters denounced the absence of media and health care during the repression which, according to other sources, has already caused 8 deaths in total in a single day. Before the videos of the murders were released, the de facto Minister of Hydrocarbons, Victor Hugo Zamora, argued: “Except for the use of gases, we ask that aggression be avoided.”

After, the repression began to be known, through social networks, videos and photos in which the uniformed men are seen indiscriminately shooting protesters.

“I was collaborating with a wounded man and I heard the shots. The partner died in my arms from a bullet shot that was lodged in the heart. I ask doctors, nurses, the Red Cross to come to help,” implored a doctor of Senkata health post, who assisted the victims. In another video, the doctor confirmed the death of 6 people, when the Ombudsman’s Office only recognized, at that moment, 3.

In Senkata, 40 kilometers from downtown La Paz, protesters blocked the entrance to the fuel plant that supplies the Bolivian capital, finally cleared by force of repression.

“I ask the patriotic and nationalist military to stop using against our Bolivian brothers the equipment that we provide them with resources, obtained thanks to the struggle of the people. Let the armed forces not stain their honor with the blood of the people for supporting a de facto government”, Morales demanded after the events.

The new fatalities, which could reach 8, add to the 9 caused by the repression that occurred last Friday in Cochabamba . They already total between 28 and 30 since the coup.

After the de facto president, Jeanine Añez, signed the decree last Saturday that excuses the armed forces from any responsibility during repression of protests, the Inter-American Commission on Human Rights announced an immediate visit because of the “risk of impunity for human rights violations. ”