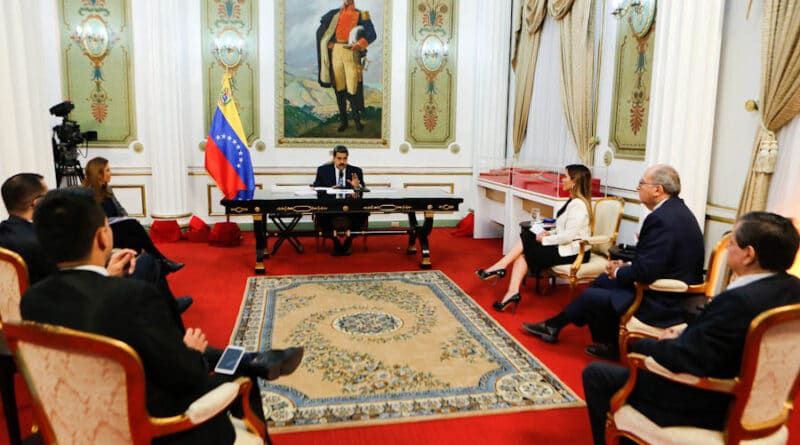 The reconstruction of a new economy on a gradual, progressive, and sustained path, hand in hand with the Anti-Blockade Law, with which the Executive has advanced, should be one of the objectives of the new National Assembly (AN), expressed  Venezuelan President Nicolás Maduro in a meeting with journalists from public and private news outlets at the Miraflores Palace. “Venezuela needs to recover its income, its wealth, it’s fundamental and it’s in the national interest,” he said.

He also reiterated on several occasions during the interview that he’ll definitely leave office if his party and political alliance, PSUV-GPP, lose the parliamentary elections scheduled for this Sunday, December 6. “I’m certain of our victory, but if for some reason Chavismo loses the elections, the next day I will take my stuff and leave Miraflores with my wife Cilia,” he stated.

Among the main economic objectives is the recovery of the capacity to sell Venezuelan crude to the world, and to promote the engines of national growth, such as the Local Supply and Production Committees (CLAP), which are 80 percent domestically produced, and aim to reach seven million families in 2021.

Maduro took the opportunity to express to the private sector and investors that in Venezuela “a new time will come and it will find us ready for all the changes, all the reforms and all the adaptations that are needed to boost the productive apparatus and to support those private sectors in their growth. He recalled the aggressions towards the economy by the United States, clearly revealed in 2019 by the senator of the Republican Party, Richard Black, who spoke publicly about the strategy of using the international financial system to attack the Venezuelan currency.

Likewise, Maduro pointed out to that his far-right opponents Juan Guaidó and Julio Borges called for sanctions against the purchasing power of Venezuelans, and against the importation of food and medicine. For her part, the Executive Vice President, Delcy Rodríguez, commented that sustained meetings were held among local and international investors and businessmen to make progress with the Anti-Blockade Law, including those belonging to Consecomercio (an anti-government business coalition), in order to promote a state-private sector colaboration to generate wealth in the country.

First 100 Day Plan
President Maduro stressed that the priority is to recover income in the first semester of 2021, and in this regard there is a 100-day plan with which the candidates for deputies of the Great Patriotic Pole (GPP) are working. “With the Anti-Blockade Law, and the subsidiary laws, and the decisions that the new AN is going to approve, I am sure that we’re going to embark on a gradual path to economic recovery,” he stressed, and specified that the communal economy of entrepreneurship by young people and women will be strengthened.

Maduro denounced the creation of the dollar market to combat an internal war of the economy, and mentioned the challenge that the Government faces to find a balance in the management of a bundle of currencies that includes the bolivar, the dollar, and other currencies, along with crypto assets. He mentioned that in 2020 efforts were made to control hyperinflation and bring it into a phase of high, controlled, inflation.

New NA Must Activate Mechanisms to Probe the National Executive
President Maduro said he agrees that the new National Assembly that will be elected on December 6 carry out pertinent investigations into alleged cases of corruption, and question ministers on issues of national interest. “You can establish responsibility on the issues of CITGO, Monomeros, gold seized by the Bank of England, and our assets that are abroad,” so that recommendations are made to the Venezuelan Judicial Power, and so justice is done for the thefts committed against Venezuelan assets from the sectors controlled by deputy Juan Guaidó.

He stressed that this new AN must be active in the face of corruption allegations, and that the deputies do not incur automatic solidarity due to political affiliations, as happened with the former president of PDVSA, Rafael Ramírez, a few years ago, when denunciations of corruption against the Oil Minister at that time, were raised by the opposition.

Featured image: President Maduro during a joint Interview with journalists from public and private outlets. Photo courtesy of Prensa Presidencial.