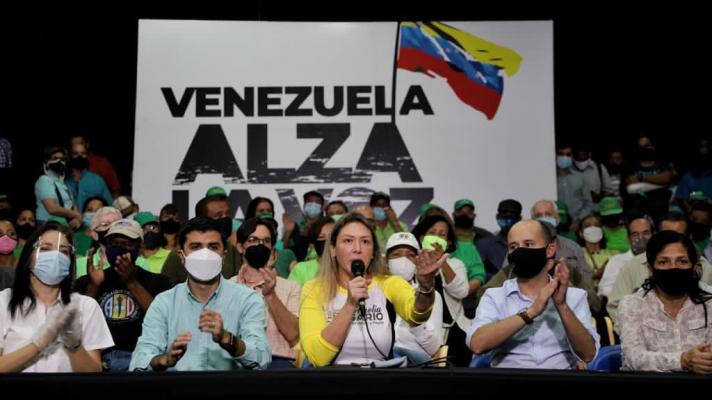 It’s not the first time that anti-Chavismo has mounted a “popular consultation” in the face of a call for legal elections in Venezuela. Recall the events of 2017 for one, when an opposition faction responded to elections with extreme violence, attempting to engineer a color revolution (or “soft coup”) on all fronts to destabilize the country and create political and economic upheaval.

Given this, President Nicolás Maduro responded by calling for the formation of the National Constituent Assembly (ANC). What did the opposition to Chavismo do? Just like in 2005, that time, they decided not to participate.

Despite their refusal, within the plan to boycott those elections, it occurred to them to hold—what they call—a “popular consultation,” as a pretense of adherence to the Constitution and democracy. History repeats itself this year with some nuances.

As is well known, Juan Guaidó is himself a portrait of illegality, with his self-proclamation in a square, looting of the country’s assets, and the appointment of fictitious institutional positions. Now the invention of an illegal parallel process without guarantees has been added to his record.

In this sense, the problem is not the concept of a popular consultation, but the way in which anti-Chavismo wants to carry it out. They purposely orient this means of political participation as a mechanism that, according to them, should annul the elections for the National Assembly this December 6—provided for in the Constitution—ignoring the legal and constitutional regulations of the Venezuelan State.

INVENTION REVIEW
The election of the National Assembly this year is indisputable, as established in Article 192 of the Constitution, which indicates a duration of five years for the exercise of the functions of the current deputies—neither more nor less. Of course, this article is completely ignored by anti-Chavismo.

In an effort to create convenient conditions that support their parastatal house of cards, the anti-Chavismo faction not only ignores or sullies the Constitution, but they also violate their own rules. In the façade of the “Transitional Statute” that they put together in January 2019, they stipulate in Article 13 that the current National Assembly will exercise its functions until January 4, 2021. At present, mainstream media makes no reference to this.

In October, Guaidó announced the two questions that would be asked in the “popular consultation.” The first question was regarding the support for continuing unilateral coercive measures against Venezuela, or even a military invasion.

The second question focuses on the rejection of the elections on December 6, or on any other date. Without a doubt, the anti-Chavista faction rules out the possibility of following the electoral path.

As if that was not enough, after the controversial elections in the United States took place, the questions of Guaidó disastrous and irregular “consultation” were changed. Now there are three questions, posed like this:

• one: about the fictitious cessation of the usurpation,

• two: rejection of the parliamentary elections,

• three: to “advance” the steps to activate apparent international cooperation, claiming that this would be to “protect the people” within the framework of the so-called Responsibility to Protect Venezuelans (R2P)—a euphemism for military invasion.

Inconsistencies are present in both the questions and the process. Like in 2017, the aforementioned “consultation” is not subject to the stringent methods of the National Electoral Center (CNE).

On this occasion, these inconsistencies include the virtual voting tool that starts on the 5th and ends on the 12th, and then goes on to a face-to-face and manual phase.

The myriad of irregularities in this invention are evident. Anyone can participate in the “consultation” without being registered in the electoral roll, and the alleged votes will be cast doubtfully through an online application, or on social media networks, or through a website.

Regarding the application, Horacio Medina, member of the organizing committee of this absurdity, admits the vulnerability of the virtual vote. In fact, he comments that there could be double voting either digitally or in person.

In addition to this, they would repeat the tactic of destroying the voting records and ballots (as the opposition did in the past): Medina affirmed that the “electoral records” will not be stored, but that after digitization they will be destroyed.

The precedent of the current consultation is the experiment of 2017. What did the opposition achieve with that farce? Surely, failure will repeat itself.

However, let us not be surprised by the presentation of very high figures for the option of another “Yes, Yes, Yes.” Guaidó will need political oxygen to continue playing a role in the plans of the US interventionist manual to undermine national powers and institutions. And why not? A final maneuver to “clean the pot,” typical of the Guaidó clan, to pocket all the remaining money they looted from Venezuela, and from the gringos in Washington.

The instrument of legitimizing this parallel electoral process corresponds to another forced pantomime on the part of a Venezuelan antipolitical faction that, for a long time, yielded to the execution of illicit and undemocratic mechanisms to attack the Venezuelan State in an attempt to remove Chavismo from the political scene. Their objective is to, a posteriori, deliver the country on a silver platter to the transnational corporations linked to Washington and New York.

The tiles on the board are moving both internationally and locally. There are discrepancies within the opposition: many of those who supported Guaidó and the strategy led by Voluntad Popular have withdrawn, as was the case with Vanessa Neumann, pseudo-ambassador of the fake government in the United Kingdom, who resigned from her artificial position, claiming that the future leadership of the self-proclaimed deputy president is uncertain.

The vote on December 6 will throw “the Guaidó strategy” into the septic tank, leaving it out of the political business that it represented in the last two years under the tutelage of Donald Trump’s administration.

Furthermore, on January 5, Juan Guaidó, along with the clique that accompanies him, will be remembered as the greatest con artists of Venezuelan politics in recent times, even without participating directly in it.