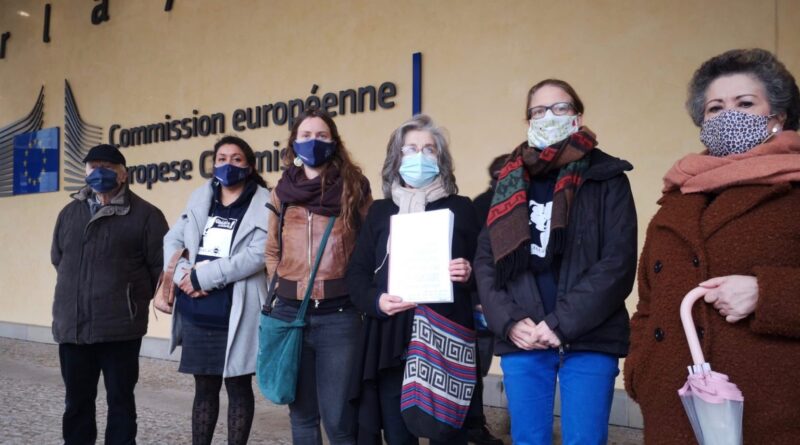 The petition attracted more than 3,500 signatures from over 30 nations and is part of a week-long global campaign against US attempts at regime change in Venezuela

Members of the European Network of Solidarity with Venezuela turned in a petition calling for the European Union to recognize the upcoming Venezuelan elections. The petition was signed by prominent left-wing public figures and leaders from Europe and Latin America and had more than 3,500 signatures from over 30 nations. It is part of an international campaign against regime change attempts in the Latin American nation. Venezuela is scheduled to hold its parliamentary election on December 6, the first since the abortive attempt to overthrow the government in January 2019.

The petitioners have asked the EU leadership to reject the “path of violence and confrontation in Venezuela”, if they are serious about their commitment to international peace-building. The petition criticized the EU’s refusal to send observers to Venezuela for being in contradiction to its stated goals towards peace and developing democracy around the world.

The petition also stated that this contradiction “is the product of permanent pressure from the US administration” dead set on a regime change operation, which does not respect either democracy or the electoral process. “This alignment with the policy of Washington’s hawks is a serious sign of the abdication of an independent foreign policy that has been exhibited in numerous speeches of intent,” the petition added.

The petition was turned in to the European Commission by the representatives of the European Network of Solidarity with Venezuela. Because of the immense support it garnered, the Venezuelan government appreciated the effort. In a tweet posted by Venezuela’s foreign minister Jorge Arreaza thanked the activists and signatories. “Thank you, comrades from around the world, for so much truth and solidarity,” he wrote.

The petition is organized by the European Network of Solidarity with Venezuela as part of an Anti-Imperialist Week of Support with Venezuela, which begins on December 1 and ends on December 8. The campaign has planned largely social media based solidarity-building activities, calling for governments around the world to reject US attempts at destabilizing Venezuela and to repeal recognition for Juan Guaido, the self-proclaimed “interim president”.

Here is the full text of the petition:

On December 6, 2020, as stipulated in its Constitution, Venezuelan citizens are called to elect new representatives to the National Assembly.

In addition to the plethora of political proposals (107 parties competing, 14,400 candidates for the 277 parliamentary seats), this election represents, above all, a democratic, legal and peaceful solution to the political and institutional crisis generated, in January 2019, by the self-proclamation of Juan Guaidó as “interim president” of Venezuela.

In the course of the year 2020, the discussions between the government and the opposition determined to resume the constitutional path have led to the establishment of new electoral guarantees, unanimously accepted by all political tendencies involved in this electoral process.

Despite its repeated calls for dialogue in Venezuela, the European Union refused to accept this new democratic consensus. And it finally decided to reject the invitation of the Venezuelan State to send observers to guarantee the good development of the election.

This contradiction is the product of permanent pressure from the US administration, immersed in an operation whose priority is not respect for either democracy or electoral processes, but rather “regime change”, whatever the cost. This alignment with the policy of Washington’s hawks is a serious sign of the abdication of an independent foreign policy that has been exhibited in numerous speeches of intent.

If the European Union were to truly bet on being a conduit of peace in a world of turbulence, it should not support the path of violence and confrontation in Venezuela.

That is why we ask the European Union to respect the electoral result of next December 6, and to support the democratic will of the Venezuelan people.