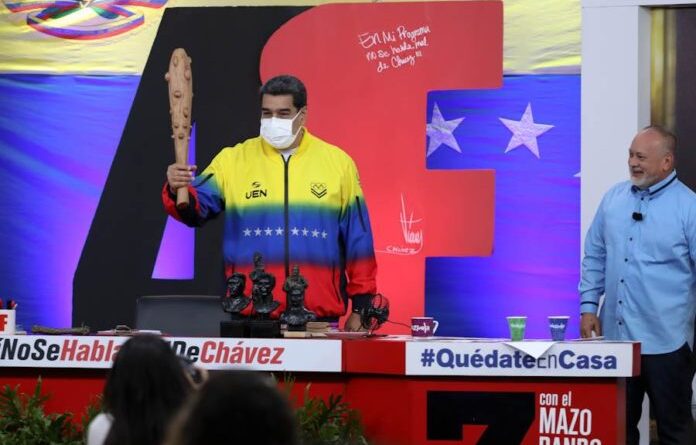 Venezuelan President Nicolás Maduro issued a call for the deputies of the National Assembly for the Homeland Block (PSUV) to promote legal instruments that allow legislation on social media and digital platforms in Venezuela.

The Venezuelan Head of State stressed this while speaking on the radio and television show Con el Mazo Dando, hosted by Diosdado Cabello. Maduro referred to the arbitrary suspension of the Twitter account of the opinion television show, broadcast every Wednesday by Venezolana de Television.

Maduro explained that Twitter’s actions constitute a dictatorship, and there is nowhere to go to file a complaint. For this reason, he asked legislators to undertake the necessary work to create legislation for social media platforms.

“It is up to you (deputies) to take action on this matter, to study the legislation, the history and trajectory, on this subject around the world,” Maduro said. “They will say that since we are a dictatorship, we are going to create regulations. No, they already exist in the world and are much more severe than here.”

Social responsibility
The Bolivarian Government has expressed its determination to review current laws and regulations on telecommunications. The objective is to establish pertinent guidelines that allow updates to regulations, including the scope of current technological platforms, to protect fundamental rights.

“Establishing very strict regulations, in the Resorte Law (Law of Social Responsibility for Radio and TV) that you are studying, will make abusive transnational companies have to strictly comply with those regulations,” said the Head of State.

According to specialized publications in the field of new information technologies, many countries already have laws to regulate social media platforms owned by very big and powerful corporations capable of censoring even former US president, Donald Trump. For example, France, the European Union, Ireland, England, and the United States have made progress in this direction.

Twitter and Facebook, mainly, massively delete accounts and publications of organizations or users identified with the left. In general, corporations attribute these actions to errors in the algorithms of each platform. However, in recent years, they have publicly acknowledged their intention to become arbiters of what is right or wrong in terms of free speech.