Amid high expectations within the country, Karim Khan, prosecutor of the International Criminal Court (ICC), has begun a visit to Venezuela. Following his arrival in Caracas on Sunday, October 31, Khan’s will embark on a three-day tour of Venezuela.

The official was received this Monday by the head of state Nicolás Maduro Moros at Miraflores Palace, the seat of the Venezuelan government. Venezuelan Minister of Foreign Affairs Félix Plasencia and Vice President Delcy Rodríguez, among other members of the Executive Power, also participated in the meeting.

With this meeting, a new stage began in the relations between the Venezuelan government and the International Criminal Court. In June, Khan took over from ICC Chief Prosecutor Fatou Bensouda, who had presided over the conclusions of the preliminary examination of the Venezuela I case, rejected by Venezuela on the grounds that the process was carried out unilaterally and without due consideration of the documentation submitted by Venezuelan authorities.

Who is the ICC prosecutor?
In February of 2021, Karim Khan was elected to take over the leadership of the Office of the Prosecutor of the International Criminal Court (ICC). The election was held according to the ICC’s usual process, in which Khan obtained 72 votes from among the 123 countries that make up the international organization.

The British-born lawyer previously served as undersecretary general of the United Nations (UN), where he was responsible for directing investigations into crimes committed by the Islamic State [ISIS or Daesh]. 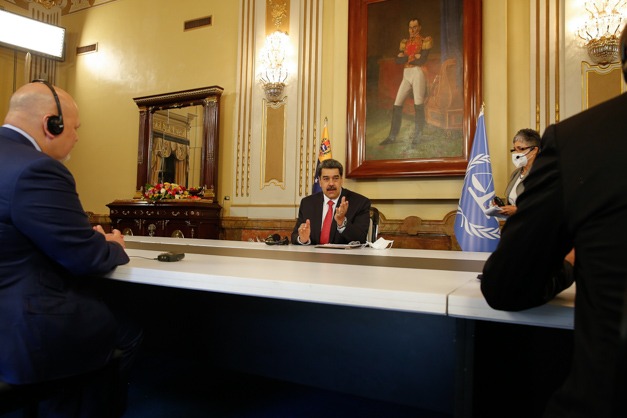 The new ICC head prosecutor, a specialist in international criminal law and human rights, is the third head of the prosecutor’s office created in 2002.

“Communication is essential to explain the mandate of the Office of the Prosecutor and the ICC and to build the trust of the parties,” said Khan, who just completed a similar visit to Colombia. “I look forward to the opportunity to hear and learn from this, my first trip to the region as an ICC prosecutor.”