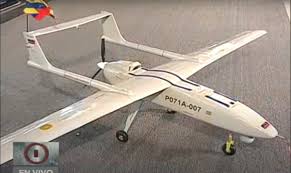 “We Venezuelans will soon be manufacturing drones for civilian and multipurpose use… drones for national development, for national defense, made in Venezuela,” the president said on Thursday. He presented a small drone, similar in design to the larger Iranian Mahajer-6.

Speaking during a work event broadcast by Venezolana de Televisión ( VTV), Maduro said that the drones will be manufactured at the National Aeronautical Company (EANSA), established last February with the aim of achieving “technological independence” in Venezuela.

On the other hand, the head of the Venezuelan Executive indicated that EANSA presented two aircraft for pilot training and observation on the same day, both completely manufactured nationally.

In turn, the Venezuelan Vice Minister of Air Transport, Ramón Velásquez, assured that these aircraft have a flight autonomy of five hours however, he did not offer more details in this regard.

During a speech by Venezuelan President Nicolas Maduro in which he spoke about the upcoming start of UAV production in Venezuela, a smaller model of the Iranian reconnaissance and strike drone Mohajer-6 flashed. pic.twitter.com/LrZKDXPZs3

Caracas is facing several challenges to maintain its sovereignty and strength in the face of foreign interference promoted by the United States regime, which supports the coup plans of the Venezuelan opposition to overthrow the Government of Maduro, imposing several rounds of sanctions against him, and even threatening a military intervention in the Caribbean country.

Faced with such a situation, the Government of Caracas is striving to advance in the military field independently. In addition Venezuela is cooperating militarily with countries such as Russia, China and Iran.

To demonstrate the heightened military power of Venezuela, in February Maduro commanded the deployment of tanks, ships and over four million militia to carry out Bolivarian Shield 2020 military drills.