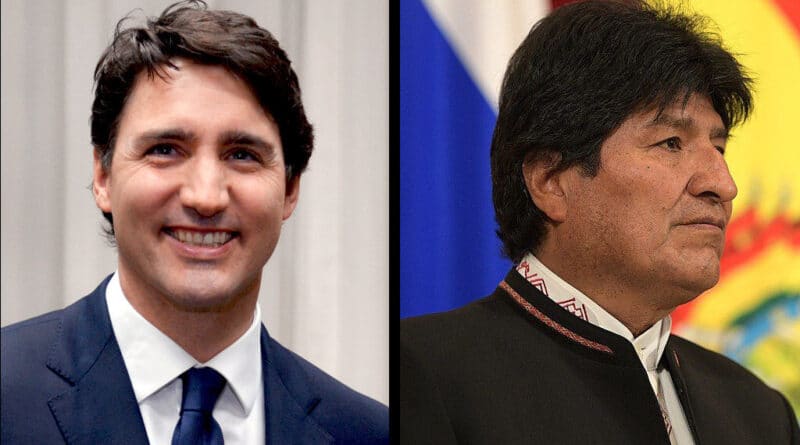 Like any Liberal Prime Minister before him in modern times, Justin Trudeau has worked to build a reputation as a progressive. His first, most successful, campaign as Liberal Party leader positioned him in the public eye as an antidote to the ideological far-right conservatism and slavish devotion to the oil sector of which most Canadians had tired.

This positioning was far from authentic, of course, as any look at the policy direction of his first term as Prime Minster would show. But Trudeau’s progressive reputation on the international stage remains largely intact. This has not been hard, however, given the impulsive belligerence that Trump has displayed during much of the time Trudeau has been in office. As in any contrast with Trump, this lowers the bar so much that business-as-usual multilateral foreign policy appears as progressive and transformative as the founding of the United Nations itself.

Trudeau’s government, under foreign ministers as problematic as Chrystia Freeland or as blandly functional as François-Philipe Champagne, has built a foreign policy with some independence from the United States under Trump’s Presidency. Where Trudeau builds complex relationships with African nations on issues like trade and public health, Trump insulted them like a racist grandpa.

Business-as-usual foreign policy appears praiseworthy when Donald Trump is President of the United States. But Justin Trudeau is about to lose the fluorine fire in a munitions factory that obscures his own incendiary foreign policy. Soon we progressives can better see the racism and regressive philosophy baked into the Liberal Party approach to the wider world.

One ongoing situation that reveals the true ugly face of Canada’s goals and actions around the world, is Bolivia. My Canada Files colleague Yves Engler has done an excellent job assessing how destructive and anti-democratic Canadian policy is regarding Bolivia. In summary, Canada leads the Lima Group, a semi-formal political pressure coalition whose founding purpose is to push from power Venezuelan President Nicolas Maduro, suppress the country’s ruling United Socialist Party, and install opposition leader Juan Guaido. Lacking the minimal organizing competence to contest a democratic election competitively, Guaido’s neoliberal-lite party has meekly relied on outside regime change pressure.

But the Lima Group has also turned its pressure campaign to Bolivia, pressuring their government to adopt policies friendly to natural resource companies keen to plunder the country’s lithium resources and other mineral wealth. In this, the Lima Group has most overtly revealed that it is simply a coalition of anti-socialist governments for the Americas. The United States not being a member, Lima Group members are free to take a soft-power diplomatic approach to the attack on Latin American socialism, the USA having burned so many diplomatic bridges through aggression and condescension.

Engler’s analyses end here, which is fair enough, since it is true. The purpose of the Lima Group is to take over anti-socialist diplomacy from a United States that has lost all Latin American credibility, even among centrists and less extreme conservatives. However much behind-the-scenes direction the US government may or may not provide, Canada’s leadership in the Lima Group is another sad contribution to revanchist politics in the Americas.

War on the Indigenous for Christian Supremacy

When the government of Evo Morales was overthrown last November, Trudeau’s government welcomed Bolivia’s new leader to the Lima Group. But Jeanine Áñez does not do the slick, smiling diplomatic pressure tactics so second-nature to Trudeau.

Áñez’s Juntos Alliance of conservative parties installed itself in power through protests about the public’s perception of irregularities in the 2019 election. According to Guardian reports, far-right gangs had escalated the campaign against Morales’ Movement Toward Socialism party to kidnapping, arson, and targeted violence against its activists, organizers, politicians, and their families. Constitutionally fifth in line for Presidential succession, Áñez ascended there on 10 November 2019 after the convenient resignations of President Morales, Vice-President Álvaro Garcia Linera, and the Presidents of both legislative chambers, all MaS.

But this was more than an authoritarian coup, because of the character of the crackdown that followed. The day Morales was forced from power, his longtime Christian right opponent Luis Fernando Camacho performed a ceremony at the Presidential Palace, kneeling before a Bible laying on top of a Bolivian flag. The pastor who blessed the ceremony announced “Pachamama will never return to the palace!”

Áñez’s own gesture with a massive Bible went more viral, but the earlier banishment mattered more for Bolivia than her recognition of what was already there. Bolivia’s right wing has embraced increasingly extreme hatred and demonization of the country’s Indigenous people since Morales and the MaS first came to power in 2006. Morales came to power as leader of a movement of Indigenous Bolivians, just under half the population, for political recognition and inclusion.

He himself was Bolivia’s first Indigenous President, and oversaw social welfare programs that brought many Indigenous out of poverty. He also began using state institutions to develop the country’s extensive lithium resources. The salt flats are largely on Indigenous land, long relegated as such because they have only become useful as natural resources this century. But the broader importance of the Morales government was that, for the first time since the Spanish invaded that land, Indigenous people had a major role in their own governance, and Indigenous culture and religion was acknowledged as a valid and powerful constituent of Bolivian society.

Here we see the profound character of the 10 November announcement that Pachamama, the Earth-goddess of Aymara and Quechua religion, would never again be welcome in the Bolivian government. Áñez spent her career literally demonizing the Indigenous: she commonly refers to Aymara and Quechua people as satanists who have no place in a civilized society.

Indeed, she may be right that Indigenous Bolivian culture cannot assimilate to the Christian radicalism Áñez takes as the essence of Western civilization. The religion of Pachamama, descended from Inca pantheism, teaches that Earth is a feminine divinity that, when treated with respect and love, blesses people with the abundance of resources and vibrant life that humans need for a full existence.

Cracking Down on Indigenous Existence

With the coup’s success, campaigns of mass violence began against Indigenous people all over Bolivia. MaS protestors themselves, largely Indigenous, were suppressed with deadly violence, including police firing live ammunition and openly killing citizens. Áñez’s government granted their enforcers legal immunity from these and all other attacks on Indigenous that followed. The implication is that there is nothing illegal, unconstitutional, or immoral about violence against Indigenous people.

The crackdown was so violent that the return of elected parliaments to Bolivia earlier this fall brought charges against Áñez and others in the top of her government, including genocide. While she dismissed the charges as a mere attempt by leftists to censor free speech, United Nations authorities corroborate the new parliament, by investigating her crackdowns as acts of genocide. So why would Justin Trudeau, as ostensible opponent of genocide, so happily welcome Áñez to the Lima Group?

Her government’s profound and vicious assault on Indigenous existence, the full extent of which many of us in North America have yet to learn, put her fascist government far beyond what much of the Spanish-speaking Americas will tolerate. Venezuela’s Juan Guaido may be a slimy neoliberal shill, but he does not aspire to the destruction of his country’s Indigenous cultures and people. Guaido is merely a pro-corporate technocrat ordinary in modern Latin American politics: of a piece with Argentina’s Mauricio Macri, or Chile’s Sebastián Piñera. Áñez’s genocide is a crime beyond the pale of these mere games of influence and corruption.

We progressives in Canada must understand that the Bolivia assault on Indigenous existence comes from the same ideology as our own country’s long, slow march of cultural genocide. Once our Prime Minister’s father was in office, Canada was no longer committing acts of genocide by intentional starvation or using Christian boarding schools to destroy Indigenous peoples knowledge of their religions and languages. But Pierre Trudeau attempted changes to the Indian Act that would have dismantled any institution in Canada that recognized Indigenous sovereignty of any kind, and assimilated them completely into mainstream Canadian life: a strictly cultural genocide.

Justin Trudeau is one of the most masterful practitioners of virtue signaling. Elected, in part, on promises to build proper infrastructure in Indigenous communities for the first time in Canadian history to end decades of boil water orders and food insecurity, he has done none of it. No functional water treatment plants or plumbing infrastructure has been built for Indigenous people as Trudeau promises, because Canada itself depends on the deprivation and marginalization of its Indigenous peoples.

Federal government agencies universally suppress Indigenous attempts to take political and economic control over their land and lives, whether homeowners in Calgary and Ontario, or fishers in Nova Scotia. The pattern is always the same: when Indigenous people assert their rights in life, economy, politics, and law, the state’s agents crack down. Canadian action against Indigenous freedom and power is the assertion of federal government authority over Indigenous people, forcing on them the bargain that there can be no higher authority.

So it was too in Bolivia, but there the authoritarians hid nothing. At most, we Canadians are more polite, though that is hardly better. At least in Bolivia, the restoration of democracy could so quickly call genocide by its name. In Canada, deniability remains all too plausible.