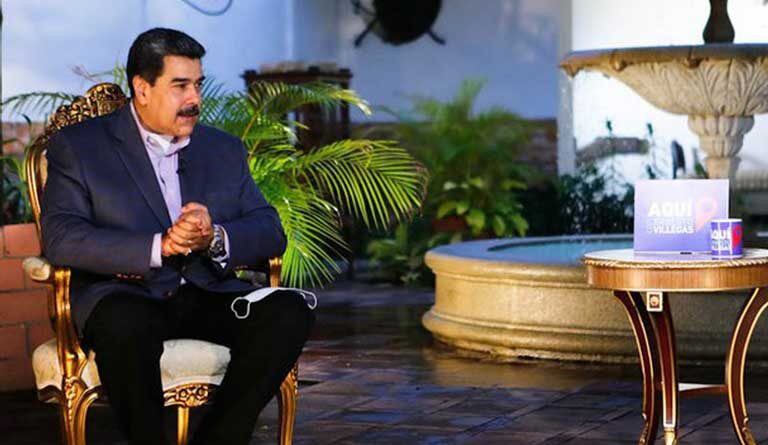 “From the United States an attack has been planned for a long time with the aim of assassinating me,” President Nicolás Maduro reiterated this Sunday during an interview on the TV show “Here with Ernesto Villegas,” broadcasted by VTV.

The national leader asserted that there is a decision in the North and in Colombia with part of the oligarchy to assassinate him and assassinate the Revolutionary Military Political High Command of Venezuela.

RELATED CONTENT: Maduro Responds to Ivan Duque: Venezuela Will Study the Possibility of Buying Iranian Missiles – “Thank You for the Idea”

Both administrations have tried on several occasions to end his life with different tactics, ranging from the use of drones such as what happened on August 4, 2018 during an event held in “Los Proceres” in Caracas, where the perpetrators were captured.

“Throughout this phase I have received threats, they have said that they are going to eliminate Maduro, these words should not be taken as a game, their objective is to end the leadership that I have, so I am not exaggerating when I say it,” said the dignitary.

Maduro commented that since 2013 he has faced innumerable attacks and aggressions in order to overthrow him, but he has kept working with enthusiasm to take care of the Venezuelan people.

“There have been 2,725 days of harassment, aggression, manipulation. I have not had a single day without the aggression of imperialism and the fascist right wing, and they have always seen me with a smile and with courage. I have not had bad days because I am always willing to fight, “he said.

The Venezuelan head of state stressed that he is not afraid of imperialism, nor of the Colombian oligarchy. “I will never betray this people, I will never surrender,” he reiterated.