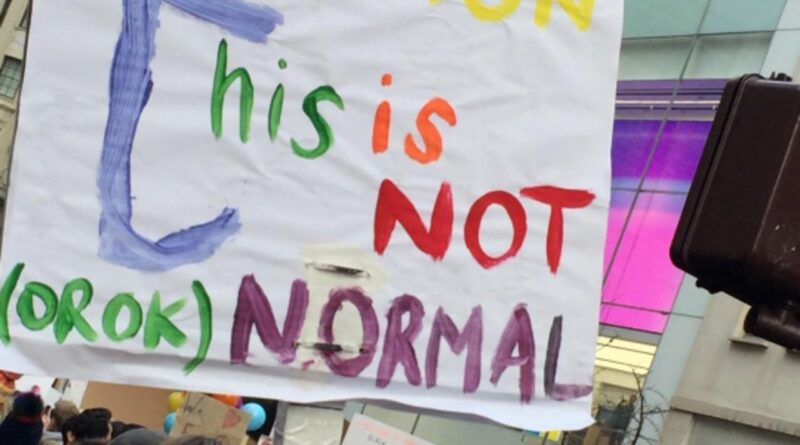 We have been invited, as humanity, to a “new normal.” The call is made to us by the United Nations System.

The normal is the “widely accepted”, it is the known, the habitual, the ordinary, whether we like it or not, whether we consider it fair or not. Faced with such a responsibility, the question we must ask ourselves is why is that and not another the normality that characterizes the world today? Who benefits from this normality of today and therefore who are the ones who decide what is normal and what is not? How have they managed to convince us of this normality? Is what is considered normal today appropriate for the 7.5 billion beings that inhabit this planet? What must be changed?

It seems to be a very complex and philosophical question, but since we have been summoned, let’s think how we would like the new world to be, let’s question and reflect on the current “normality”, let’s get rid of the paradigms that have been imposed on us, let’s imagine something different, let’s guess another possible world.

The “normal” today
Apparently, the “normal” thing is that around 820 million people in the world are today in a situation of food insecurity; of these, 150 million suffer from famine despite the fact that, according to the FAO, every day there is enough food for each and every one of the inhabitants of the planet Earth.

It is estimated that in 2020 some 12,000 people will have died of hunger daily as a result of the impact of the pandemic, a greater number of those estimated to die from Covid-19 itself. Hunger is today the cause of 45% of deaths of children under 5 years of age in the world. This is the “normality” we live in while 8 of the largest food and beverage companies have distributed more than US $ 18 billion to their shareholders since January of this year, that is, in the midst of a pandemic. This figure is 10 times higher than what the United Nations considers necessary to prevent people from going hungry.

It seems “normal” for 1% of the world’s population to appropriate 82% of all world production, or at least that is what has happened for decades. As it is also “normal” that more than half of the 7.5 billion people on this planet live in poverty.

It is “normal” that in the face of a situation of contraction of world production some 450 million unemployed are generated, as it is also, in this world we live in today that, while these millions of unemployed workers do not have a way to provide daily food for their children, the 12 greatest billionaires in the world broke records, increasing their wealth by more than 40% since January of this year. Normal?

It looks “normal” or at least that has made us see and understand for many decades that relationships in the social work process must be one of dependency, domination and exploitation. Why is it “normal” that those of us who truly produce and those who add value are the ones who have to mark a card when entering and leaving, those who barely get half an hour to eat, those who count us and discount working time, and to top it all, we only have 18% of everything we produce despite being 99% of the population, while the other 1% keeps 82%? This issue of worker exploitation becomes “so normal” that sometimes some are not even aware of belonging to the exploited class and rather, classing is “normal”.

Let’s imagine for a moment that the “normal” thing is not capitalism, that the bourgeois does not continue to appropriate the value of our workforce. Let’s think about more humane work relationships, about the fair distribution of wealth based on the contribution in the production process.

It is urgent to think about how capital will reinvent itself in this “new normal” that will also incorporate not only new work relationships not based on domination, but also new technologies. It is necessary to go ahead to avoid being imposed upon, once again, by another “new normal”.

The “normal” thing is that, for example, women and girls in the world dedicate 12,500 million hours a day to carrying out activities such as taking care of children, the elderly, the sick or the disabled, in addition to domestic tasks such as cooking, washing or going to fetch water or firewood, without these being recognized as an added value to the economy and much less remunerated.

The economic blockades are already part of the “normality” of this world, or at least that is what the interests of big capital are trying to make us see. It is already “normal” to go annually to the United Nations Assembly and that all countries, except 2, vote against the blockade of Cuba, as it is also “normal” that the US vote does not even care about that voting. The impositions and criminal threats of the US to the peoples of the world is part of that “normality” that must be changed. Why should one country decide the fate of other peoples?

It is “normal”, since Bretton Woods, that a single currency, the US dollar, is the world’s reference and that a single payment system, SWIFT, is the check point for financial transactions. Since the 1970s, it is “normal” for oil to be bought and sold in dollars, with all countries having to have the “precious” currency. Perhaps it is time for a monetary and financial “new normal,” to take away the privilege and power that was granted to the United States in the post-World War II “normal”. Maybe it’s time for a lot of reference currencies to trade with and a ton of payment clearing systems, to be the normal.

We would lose a great opportunity as humanity if, in these times of pandemic, having been summoned to a “new normal,” we limited ourselves to thinking and planning only a new world in which the mask becomes an essential accessory of our daily attire.

We deserve a world of equals, without the exploited or exploiters, without distinction or exclusion, without racism or xenophobia, ecologically sustainable. The world we want must guarantee the right of the peoples to self-determination, it must be multi-centered and pluripolar, without imperial domination, in which cooperation and solidarity prevail. A world in which international standards are respected and followed by all.

We want a world in which justice, true freedom and peace are the norm. Let’s walk, without deviating, towards that horizon.