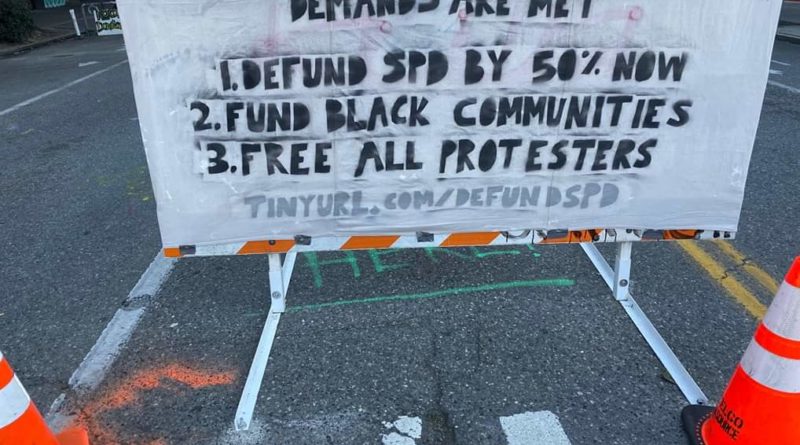 Today at the CHOP, tensions were high after some bulldozers were moved near CHOP’s barriers. This led to shouting “Red alert, CHOP can’t sleep!” Some protesters laid down in front of bulldozers.

Police were stationed a block away to protect the Seattle Department of Transportation. People in the CHOP are naturally concerned and are more on edge than usual. There has been quite a bit of mainstream media around and they seem to only
turn their cameras on if they can find a conflict. The CHOP chief of security was heard to advise CHOP protesters to be aware that media is trying to capture unfavorable optics.

Although the media likes to claim that the protesters’ demands are unclear, they are spray painted everywhere and are in front of the CHOP’s barrier on 12th and Pike. Protesters are demanding a 50% budget cut. Police have responded with a 100% service cut, including ambulances, and a work slowdown to the entire neighborhood with up to fifteen minute response times to the neighborhood being reported by the police themselves.

The second demand is to help fund black communities and restorative justice, housing, and healthcare. These are services only the people of the CHOP are attempting to provide through mutual aid. The third demand is freedom for all arrested protesters. This demand has not been responded to. Some negotiations are now occurring. Update: One Proud Boy has also been booked into Portland jail for violating parole by being up at CHOP where he committed an assault caught on video. This is a first step in catching up to the white supremacist attacks and instigation at CHOP.