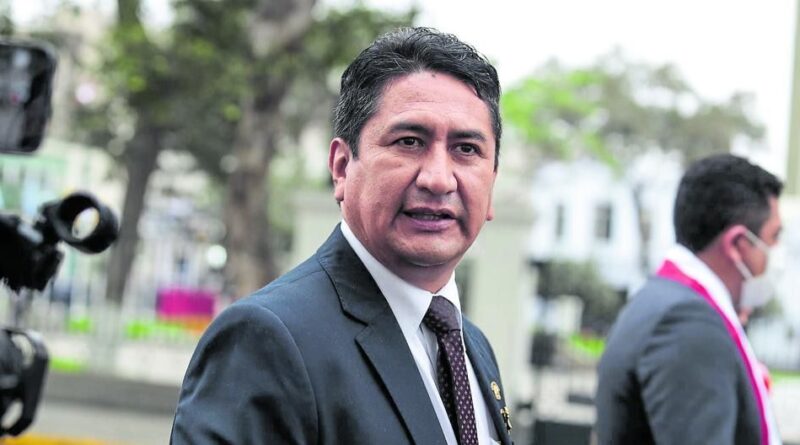 His name is Vladimir Cerrón and he is the target of a fierce attack by the narco-Fujimorista right wing in Peru. This is no wonder as Cerrón, head of the Perú Libre party—the same organization that made it possible for Pedro Castillo to become president—is an important figure when it comes to ideological reaffirmation, critical in order for the process of popular rebellion to not amount to nothing, as it did with Ollanta Humala.

Cerrón has a long history of fighting for the Revolution and socialism for Peru. He is young but at the same time a veteran stoker of the ideas that fuse Marxism and revolutionary nationalism, shaped in the legacy of Mariátegui and the insurrectionary practices of the indigenous peoples. These roots have left a history of rebellion and struggle, first against the genocidal Spanish conquistadors, and today expressed in the challenge to the oligarchy of Lima, identifying as and speaking Quechua, Aymara, and many other native languages. Hence the hatred and contempt with which the retrograde congressmen and congresswomen of Fujimorismo received the speech in Quechua by Prime Minister Guido Bellido during the session for the vote of confidence.

Cerrón, not by chance named after Vladimir Lenin, whom he has honored throughout his career, was born in Chupaca, in the department of Junín, and it is precisely to that province that he has always dedicated his political militancy. He graduated as a neurosurgeon through two scholarships that allowed him to study and learn about the Revolution in Cuba, and then he practiced medicine at the service of the poorest in hospitals in Muquiyauyo and Huancayo. However, in addition to being a doctor, he never stopped being politically active, creating several parties and movements to reverse the perverse relationship between exploiters and exploited.

In this unstoppable march, Cerrón was elected in 2010, by an overwhelming majority of votes, as governor of Junín with the Perú Libre Regional Political Movement. A year later, in recognition of his transformative drive, he became president of the first National Assembly of Regional Governments.

His clear positions from below and to the left always brought him into confrontations with the narrow-minded right wing, which tried to devalue his government administration and his party militancy, inventing infamies and seeking to condemn him for crimes of corruption that were never proven, except—as is currently the case—in the mind of some prosecutor of Peruvian fascism.

Cerrón’s re-election in the Junín elections in 2018 meant that the pressures of his enemies turned into a flood of accusations, ensuring that a Justice system that never ruled in favor of the poorest had him suspended from his position as governor, including a conviction that put him in prison for a few months, accusations had no basis. A similar campaign affected another great fighter, the governor of Puno, Walter Aduviri Calisaya, who was sent to prison for a lengthy period. The Lima right wing could not allow the emergence of governors who did not conform to their idea of corrupt institutions such as those that had been developing since the dictator Alberto Fujimori governed, and it seemed that they would be able to restrain, with arrests and lies, the popular flood that had been brewing in the provinces most affected by decades of bad central governments. But they did not count on the fact that this time the fed-up people of the nobodies were ready to kick over the table.

As the political subject that he is, Cerrón never ceased in his determination to fight the powers that be, and those who maintain carnal relations with the North American empire. He denounced the mining transnationals, he put himself at the service of those who fight for the land and against extractivism, and of course continued to add enemies to his agenda. This is how he arrived at the great battle of this last year, in which with strategic vision he ceded his authority with the Perú Libre party, which he leads, so that a rural teacher who emerged from the poor peasantry of deep Peru could become president. The rest is well known: the narco-Fujimorista right wing and the Lima bourgeoisie did everything possible to prevent Castillo from reaching the presidency. They revived a ridiculous anti-communism, bought judges, prosecutors, and above all they took refuge in campaigns of media terrorism and in threats of a coup by an outdated but extremely dangerous military, which must be purged, no matter what. However, the great popular mobilizations, and the desire that this time it would be different than before, prevented it at each stage. Castillo won in the first and second round, and the pathetic face of the corrupt daughter of the imprisoned dictator was transformed into a grimace of hatred.

Since last July 28, when Castillo took office, the war against the people’s rights has reached the level of actual demolition. First, they targeted the best foreign minister the country could offer for the honor of the Patria Grande, and thus, unfortunately without much resistance, the weakness of the government offered the head of Héctor Béjar. Then followed the campaign against Prime Minister Guido Bellido, whom they tried to humiliate in Congress. They failed thanks to the clarity with which he confronted this new “combat.” Finally, in revenge for the defeat suffered in Parliament, the right-wing offensive is determined to stop Cerrón again, even aiming at outlawing Perú Libre, so that Pedro Castillo will be increasingly cornered.

There is no doubt that Cerrón will continue fighting. It is undeniable that he is a key figure to ensure that the popular process, which has taken so much effort to build, does not collapse like a house of cards. What is essential at this crucial time for Peru is that any inclination to concede, presenting a profile of weakness that encourages political suicide, be set aside at the governmental level.

This battle must be won with the people mobilized in the streets. To defend Vladimir Cerrón today is to defend the possibility that Peru can definitively emerge from the economic, political, and cultural disaster in which capitalism and imperialism, through their local cronies, have placed it. To defend Cerrón today is to support the administration of President Pedro Castillo and Prime Minister Guido Bellido.

This opportunity to revolutionize everything that needs to be revolutionized should not be lost. In the face of the right wing and fascism, flirtations are of no value but rather the strength of ideas, the unity of the people, and the fighting spirit that leaders like Vladimir Cerrón have always demonstrated.