A man stands at a voting booth at a polling station during parliamentary election in Caracas, Venezuela, December 6, 2020. REUTERS/Manaure Quintero

In preparation for the November 21 mega-elections to select regional governors, mayors, councilors, and legislators, the impact of the sanctions imposed by the United States government on Venezuela entered the polls as one of the variables that most influences the opinions of voters.

For example, the polling company Datanalisis—with deep connections to the extreme-right opposition—presented the results of a recent study in which 29.2% of those interviewed affirmed that they would not vote for a candidate who has supported the sanctions. 11% pointed out that “it would be a negative factor, but it would not be the only one.”

In this way, the total negative opinions about opposition leaders who supported or promoted the application of economic pressure against the Bolivarian Republic of Venezuela adds up to 40.2%.

With less than three months to go before regional and local elections, this trend represents an element that could affect groups on the extreme right. These sectors based their political campaign on the promise of “regime” change through the financial and commercial asphyxiation of the entire nation.

Opposition overview
In the political landscape leading up to the regional elections, some sectors of the opposition have already announced their candidates for popularly elected positions in states and municipalities of Venezuela. Meanwhile, other groups, the most extremist, are participating in the dialogue in Mexico City with authorities of the Venezuelan government.

The delegation from the so-called Unitary Platform of Venezuela has spokespersons from the right-wing, currently led by Capriles Radonski, and including representatives of the faction headed by Juan Guaidó, who went from condemning the elections to “leaving open the ways for dissensions to be expressed.” 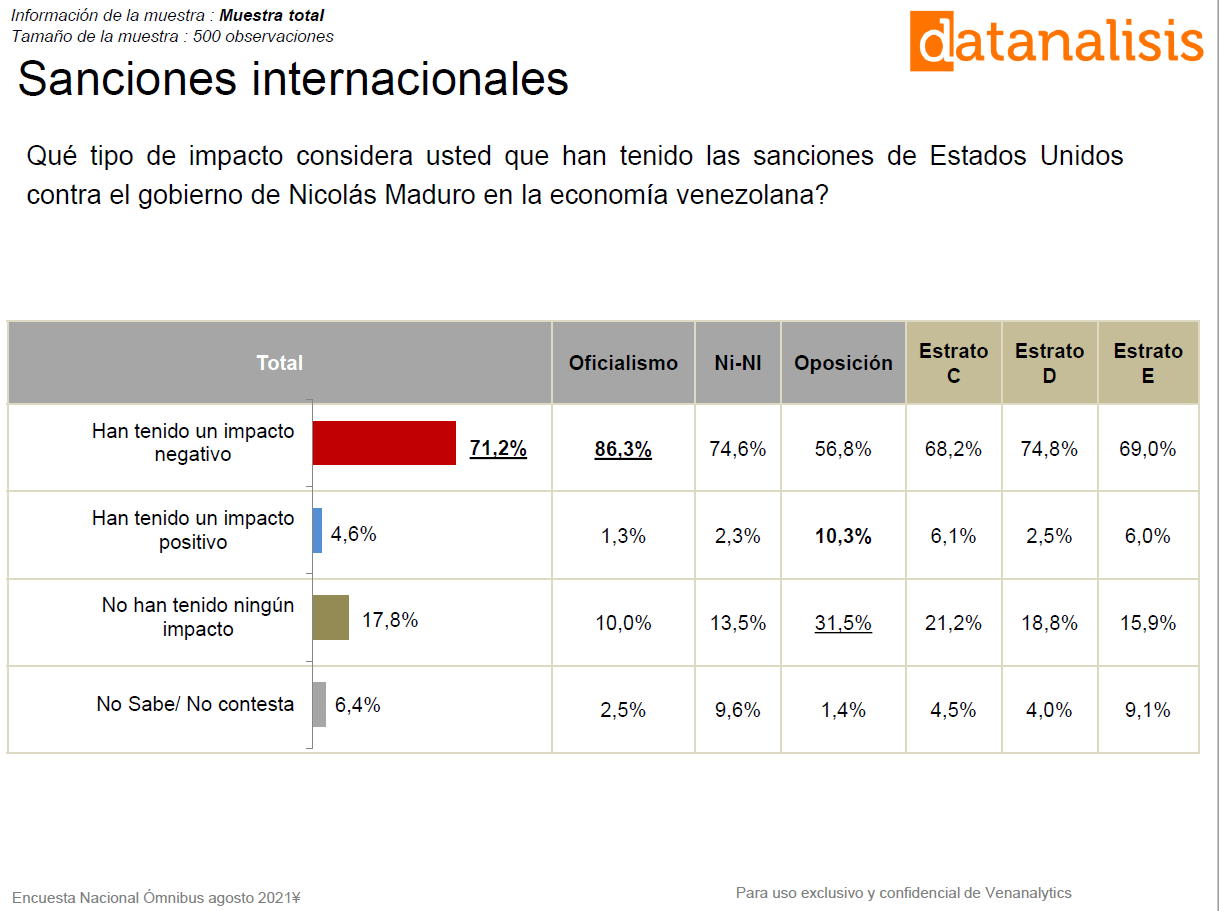 With all this, the opposition’s outlook, facing the November 21 elections, is marked by the issue of unilateral coercive measures. The lifting of these illegal “sanctions” is one of the issues on the negotiating agenda that will resume on September 3.

According to the data collected by the private firm Datanálisis, 71.2% of Venezuelans consider that the “sanctions” have had a negative impact on the country’s economy. This opinion even includes 56.8% of people who identify themselves as supporters of the Venezuelan opposition.

Featured image: A man stands at a voting booth in a polling station during parliamentary election in Caracas, Venezuela, December 6, 2020 (Manaure Quintero/Reuters)