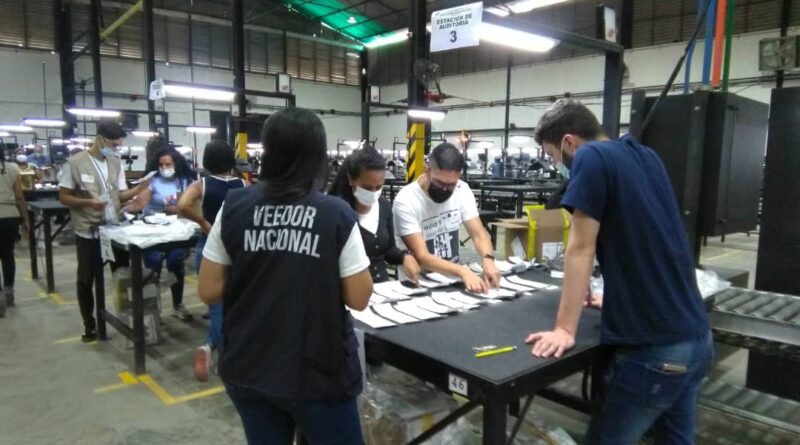 Auditors from political parties alongside technical personnel from Venezuela’s National Electoral Council (CNE), external advisers, and assistants analyzed a sample of 206 polling stations from the election day on November 21, which is proportionally representative of the entire country.

According to the press release of the electoral body, on Friday, November 26, the Citizen Verification Audit Phase 2 was carried out in the facilities of Warehouse Number 3 of the Electoral Power in Filas de Mariche, Miranda state. The sample, using the boxes in which voting receipts and other materials are stored, was audited

This review was completed in 20 audit stations, which complements the Citizen Verification in its first phase, carried out on the night of November 21 on 53.4% ​​of the polling stations set up for last Sunday elections.

The methodology consisted of counting, checking, reviewing, and validating the voting vouchers contained in the safe-deposit boxes of the polls stations examined.

The general objective of the Citizen Verification Phase 2 is that the counting of the votes contained in these safe-deposit boxes serves as a parameter to measure the effectiveness and quality of the automated electoral voting system.

The activity, which lasted throughout the day this Friday, included the following sequence of steps:

• Verification of the alphanumeric security sequences (hashes) of the applications contained in the voting machine used at each table, as well as the data corresponding to the biometric information of voters.
• Emptying, at each audit station, of the general information of the Citizen Verification Act Phase 1, corresponding to the audited table.
• Corroboration of the physical integrity of the electoral material of the voting stations (minutes, voting notebook, reports, etc.).
• Opening of the voting receipt box.
• Notation of the total number of voters at the table, according to the voting notebook.
• Accounting of the total number of vouchers in the safe-deposit box.
• Accounting of the number of voters, according to the tally sheet.
• Count of the number of voters, according to the list of voters printed by the machine.
• Total, based on the printed receipts, of the number of votes per organization for political purposes, candidate, or (possible) blank votes.
• Automated comparison of the QR codes of the tally sheets against the official count of the National Tabulation Center.
• Signing of the Citizen Verification Act Phase 2.
• Reorganization and storage of the material used in the audit, for possible later purposes.

In general terms, this new audit confirms the accuracy of the votes computed by the CNE on the audited tables on Sunday, November 21, at the end of the election day.

Political organizations such as the United Socialist Party of Venezuela (PSUV), Democratic Unity Table (MUD), Alliance for Change (APC), Red Flag (BR), Homeland for All (PPT), Unified Tendencies to Create a Movement of Organized Revolutionary Action (Tupamaro), A New Era (UNT), Venezuelan Popular Unity (UPV) and and the National Council of Venezuelan Indigenous Peoples (Conive), were represented in the audit by their technicians, who signed the corresponding minutes as a sign of agreement.

Members of the national observation organizations such as the Electoral Observation Network of the Education Assembly (ROAE), Social Project (PS), and a member of the Mission of Electoral Specialists of the Carter Center, also attended this activity of the 2021 electoral schedule.

By this Monday, November 29, starting at 9 a.m., the Data Audit of Voters Phase Two will conclude with the final revision scheduled for the 2021 regional and municipal elections. It will be transmitted live through CNETV, the Electoral authority streaming channel on the internet, accessible through the cne.gob.ve website.

Featured image: The citizen verification audit was in a CNE warehouse in Mariche, Miranda state. Photo by Twitter/@cneesvzla.