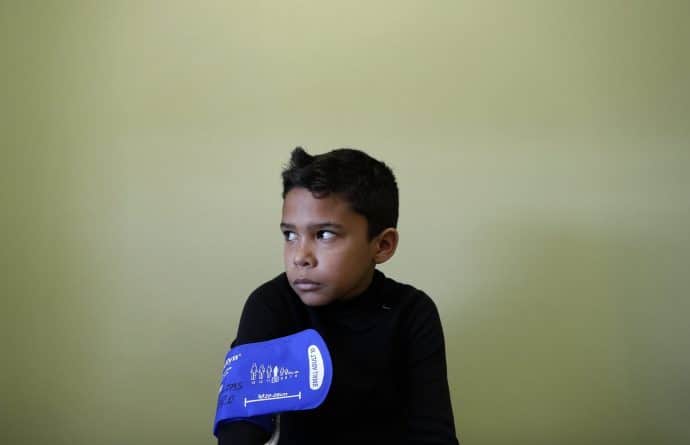 Carlos Acosta thought his prayers had been answered when he was able to fly his son out of Venezuela, where hospitals lack basic supplies, to Spain for a needed bone marrow transplant.

That was until Acosta’s 12-year-old son Jesus, along with at least eight other severely ill children, became the unintended victims of U.S. sanctions against companies tied to the embattled government of Venezuelan leader Nicolas Maduro.

The bills for Acosta and Jesus, who had the operation but requires follow-up care and possibly a second transplant, had been covered by the Houston-based “Simon Bolivar Foundation,” a charity funded by Citgo, a subsidiary of Venezuela’s state-run oil giant PDVSA.

But last week Acosta and the parents of eight other children receiving treatment in Barcelona got a letter from the foundation saying it could no longer support them due to fallout from the diplomatic crisis between Washington and Venezuela. That left them wondering what would become of them, along with other sick kids waiting to leave Venezuela.

The letter said: “Unfortunately, due to the recent changes to legal regulations and the sanctions imposed by the United States on Venezuela and Petroleos de Venezuela (“PDVSA”), the Foundation has been prohibited from paying services and expenses incurred by the Patient as of February 26, 2019.”

The email with the letter included plane tickets for Acosta and his son to fly back to Venezuela on Sunday.

Acosta said he and Jesus are not going anywhere. They can’t. Jesus, whose immune system is weak, would be incredibly vulnerable to getting sick on the flight.

And once home, Acosta said he wouldn’t be able to guarantee that his son got clean blood for the transfusions he has needed since he was diagnosed at 5 months old with Thalassemia, a blood disorder that means his body doesn’t produce enough red blood cells. Acosta said Venezuela’s hyperinflation has driven prices beyond his reach and led to the scarcity of medicines and basics like medical gloves and sanitized syringes.

“Going back would be a death sentence” for Jesus, Acosta told The Associated Press from the apartment where he has been staying since arriving to Barcelona in July.

“Thank God he was given the chance to have the transplant,” he said. “But right now Venezuela is not safe in the least for him in his state of health.”

Acosta did not criticize the sanctions that the Trump administration hopes will pressure Maduro to step down in favor of Juan Guaido, whose claim to the interim presidency is recognized by the U.S. and dozens of other countries. Last month the U.S. blocked companies from entering into financial transactions with PDVSA. That made it very hard for Maduro’s struggling regime to access overseas assets and earnings, including those from Citgo. It is expected that the U.S. will try to hand over control of Citgo to people chosen by Guaido.

Acosta hopes that if Guaido can take power, the money will once again flow through to the foundation, and the families.

“In Venezuela we are going through situations that are critical and this foundation was the only option we had,” said Acosta, who works for the power company in Ciudad Bolivar, some 300 miles (482 kilometers) southeast of Caracas.

The other children from Venezuela who are being treated at the Sant Joan de Deu hospital have problems that include brain tumors, eye glaucoma, leukemia and heart conditions.

Apart from paying medical costs, plane tickets and accommodation in a hostel for the patient and one of the parents, the foundation gave them a 930-euro ($1,053) monthly stipend.

But payments dried up earlier this month.

Fortunately, the Sant Joan de Deu Hospital stepped in and footed the hotel bill for this month. Acosta, who can’t legally work in Spain, is getting meals with the other parents from the hospital’s cafeteria.

Sant Joan de Deu Hospital executive Toni Arias told the AP the Simon Bolivar Foundation had provided it with sufficient funds to cover the remaining medical care of the nine children. Arias said the hospital is also trying to find charities or local government aid to help with the parents’ living expenses.

“We are not going to let them be cast out on the street,” Arias said.

Sant Joan de Deu said while it will guarantee the care of its current patients, no further children will arrive via the Simon Bolivar Foundation.

Sandra Manzanares, an insurance broker in Valencia, Venezuela, is the mother of a child who has been left in the lurch.

Her 14-year-old son Javier is suffering from a skin reaction produced by a bone marrow transplant he received at Sant Joan de Deu in 2017. She was planning to take him back to Spain for more treatment but has had to put those plans on hold. She said she knew of three more children in the same predicament.

Manzanares told the AP that in Venezuela she is able to find maybe half of the seven types of medicine her son needs daily.

“Maybe they have had their funding frozen, but a solution can be sought. Especially when it concerns health,” she said.

The Simon Bolivar Foundation and Citgo did not immediately respond to requests for comment. According to the foundation’s website, besides helping Venezuelans get treatment abroad since 2008, it funds patients and programs at five hospitals in the U.S.

Jesus has been in the apartment with his father since he was released from the hospital two weeks ago. He visits the hospital regularly and must remain under doctors’ close care for at least seven more months.

Acosta has been given strict orders to cook all the food his son eats, to keep their room especially clean, and to keep him away from crowds so that his immune system doesn’t fall prey to infection or disease.

Jesus said that despite missing his mother and baseball, he wants to remain in Spain.

“I prefer to stay here,” he said. “There is more hygiene.”