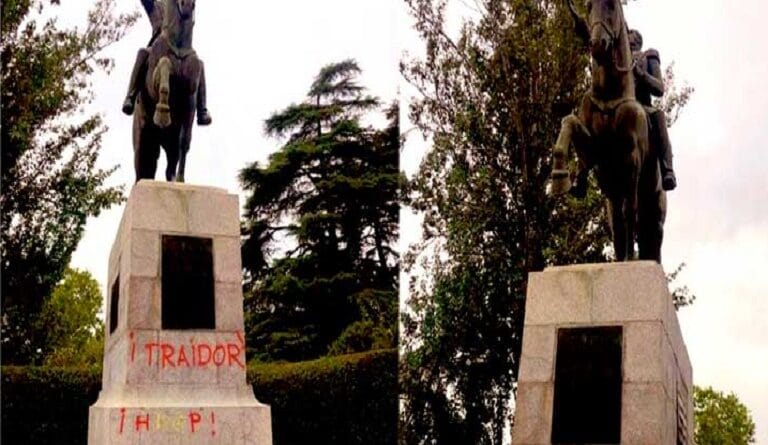 The Deputy Minister of International Communication of the Ministry for Foreign Affairs, William Castillo denounced followers of the far-right party of Spain VOX for attacking the equestrian statue of the Liberator Simón Bolívar located in the Parque del Oeste in Madrid, Spain.

The vandalism consisted of graffiti and offensive phrases painted on the statue, in disrespect of the memory of the Liberator. Simon Bolivar is the Venezuelan that led the war of independence against the Spanish Empire during the early XIX century; he was able to build an army that expelled Spanish troops from Bolivia, Peru, Ecuador, Bolivia and Panama.

RELATED CONTENT: While Fed Up Gringos Tore Down Columbus and Racism Related Statues – In Miami Bolivar Statue is Vandalized

“VOX, the partners of VP –Voluntad Popular- and Guaidó, attack the statue of Simón Bolívar in Madrid. Bolívar led an army of the shirtless and liberated 5 nations. He is the greatest statesman and Liberator of this continent. His name alone caused panic in the Spanish Court and he continues to do so,” Castillo wrote in a tweet posted on his Twitter account, in which he attached photographic images showing the statue.

The complaint was made by Manuel Rodríguez, spokesman for La Causa R in Madrid, who pointed out that the culprit promoting these attacks is the journalist Jesús Rojo, who has branded the Liberator as a “murderer and criminal”, as reported by the website apuntoenlinea.net.

“I am going to explain to you who they are, they are a group of fascists headed by a pseudo journalist writer named Jesús Rojo (who calls Bolívar a murderer and criminal) and in which there are VOX militants. They have been asking for the removal of the statues of Bolívar from Spain for 2 or 3 years,” Rodríguez said on Twitter.

In another message published on the social network, he wrote: “We ask the municipal authorities to please clean up the monument as soon as possible so that next Friday, July 24, the Birth Day of the Liberator, Simón Bolívar is in good condition,” the Venezuelan News Agency reported.

For his part, Venezuelan Foreign Minister Jorge Arreaza, posted a tweet on his social network accounts where he notes that “the most recalcitrant sector of the Spanish right has sought to tarnish the memory of the Liberator Simón Bolívar. After 200 years, they still do not forgive that Bolívar led an unstoppable, irreversible, anti-imperialist historical process: the independence of Our America,” in rejection of the vandalism attack on the equestrian statue of the Liberator Simón Bolívar in Spain.

A few weeks ago a similar incident occurred in Miami, United States, and a group of local right wing Venezuelans immediately blamed protesters from the Black Lives Matter movement. But many Chavistas in Venezuela immediately associated the incident with local Venezuelans and the Cuban “gusanera” for the vandalism against the Venezuelan hero that embodies the ideas of independence, sovereignty and anti-colonialism. To date, no one has been held responsible in Miami for that incident.