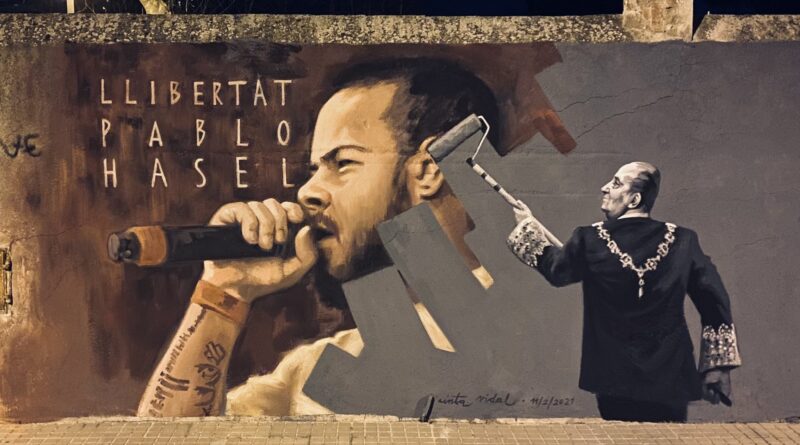 This Tuesday, angry citizens organized demonstrations in several cities in Spain in response to the detention of the rapper Pablo Hasél. The most serious incidents occurred in Barcelona, with a young woman allegedly injured by a rubber bullet, but also in Lleida, Girona and the small town of Vic. Garbage containers were set on fire and urban furniture material used as barricades was destroyed in response to police brutality towards the protesters.

There were four people arrested, two in Barcelona; one in Lleida and the other in Vic. A police agent was injured in Lleida.

The detention of Pablo Hasél and his sentencing for controversial charges of promoting terrorism and insulting the Crown, leading even Amnesty International to label it as an attack on freedom of speech, has provoked the immediate call for protest demonstrations this morning that have ended with unusual violence.

The demonstration in Barcelona began at around 7 p.m. in Plaça Lesseps, although shortly thereafter the participants began to walk towards Avinguda Riera de Cassoles and Via Augusta, where clashes occurred at the height of the National Corps police station, where an evident excess use of force was used.

Protesters threw bottles and burned containers against the Mossos cordon that protected the police station, while authorities responded with foam bullets. At least one young girl was allegedly hit in the eye by one of the projectiles.

Protesters burned garbage containers in the streets of Barcelona.

Ordinary Spaniards have shown their indignation with protests sparking in many cities and towns all over Spain, but the excessive use of force by police has ignited violent incidents in some cities. In response to police agression, some protesters in Barcelona set up barricades with containers they set on fire.

There are two detainees.

On Avinguda Diagonal, protesters cut off traffic, smashed the windows of a CaixaBank office and burned motorcycles parked in the Travessera area near Via Agusta. Various videos show the peaceful nature of most protests but police response along with the impudence of the case against Pablo Hasél has caused a violent response from some of them.

Fire in the streets of Lleida

More than a thousand people (2,000 according to the organization and 1,400 according to the Guardia Urbana) gathered this afternoon in Lleida in a protest in which the headquarters of the PSC and the PP have been attacked and there have been moments of tension in front of the Government Sub-delegation.

Protesters started a protest in the Plaza de la Catedral de Lleida and, after reading a manifesto, some songs by the already imprisoned rapper from Lleida were heard.

After a few minutes, the entourage went to the PSC headquarters in Lleida, before heading to different streets in the city’s financial district.

The Girona demonstration led to riots in front of the Government Sub-delegation with objects being launching against the police that protect the building, and burning of containers.

According to the Mossos d’Esquadra and the Guardia Urbana, some 5,000 people initially concentrated in the Plaza 1 de Octubre and later, walked through various streets of the city to protest before the delegation of the Generalitat and, shortly after, before the courts.

At that point, which was reached without incident, the first objects and pyrotechnics were thrown at the officers.

In the end, the demonstration, although with a much smaller presence of people, reached the Government Sub-delegation, where riots broke out.

In Barcelona, when the cops kidnap a comrade, they build barricades and attack the police station.
Solidarity with Pablo Hasel and the Catalan workers.#ACAB pic.twitter.com/e7hGMM9mXd

Attacks against the agents located there have intensified and containers have been planted as a barricade a few meters from the building.

Traffic signs have also been torn off to be used as throwing objects while the Mossos d’Esquadra have fired salvos of foam bullets.

The burning of containers and a small fire at the doors of a bank required the presence of firefighters, while the protesters dispersed through the streets of Girona adjacent to the area of the incidents.

A rally in the Plaza del Ayuntamiento de Valencia has demanded “freedom” for the rapper and repeal of the so-called “gag law.” Between bouts of applause, songs by the artist and shouts of “Valencia is with you,” the participants supported the mobilizations.

Groups of people gathered in the Plaza del Ayuntamiento, with social distancing between participants, some dressed in Valencian masks in which the phrase “libertat exp” and a red stripe could be seen.

During the protests, messages such as “this is a mafia” was chanted; “They call it democracy and it is not, it is a dictatorship and you know it”; “Hasél, friend, Valencia is with you”; “Libertat political prisoners” and “Valencia is antifeixista.”

Along the same lines, protesters wrote ‘Libertat PH’ with chalk on the ground and defended their cause with a banner reading “sense llibertat no hi ha democracia” (‘without freedom there is no democracy’). But videos show how police charged violently again the protesters in Valencia.

Featured image: Street artists as well as ordinary people expressed in different ways their anger for what they call the abduction of Pablo Hasél in a clear case of violation of freedom of speech. (Photo courtesy of @joanjubany.)