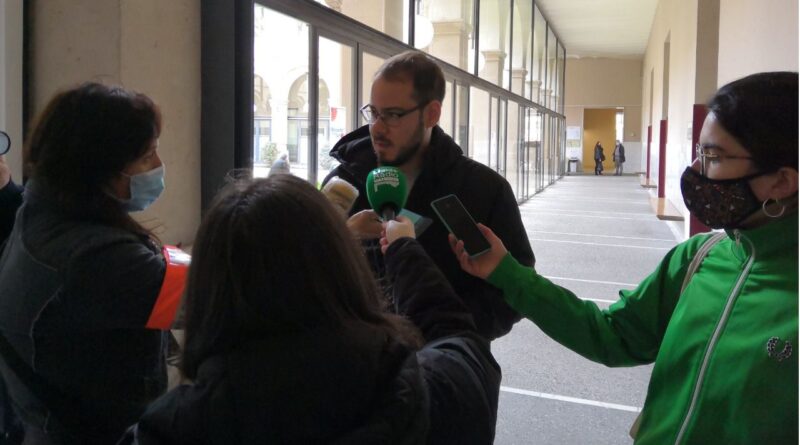 This Monday, Spain’s anti-monarchist artist Pablo Hasél, and members of a group demanding his freedom (Llibertat Pablo Hasél), locked themselves into the rectory of the University of Lleida, the oldest university in Catalonia, located approximately 100 kilometers from Barcelona, to prevent the artist from being taken into prison. The act of resistance takes place three days after the National Court’s deadline for his voluntary entry into prison, following Hasél’s conviction for glorifying terrorism.

As the Llibertat Pablo Hasél group broadcast updates through social media networks, Hasél locked himself into the Lleida rectory “to wait for them to come for him.” Hasél urged his supporters to come to the rector’s office to protest against his prison sentence and to defend freedom of speech. “Imprisonment will only be prevented with the solidarity of the people,” stated Llibertat Pablo Hasél.

Hasél himself confirmed his confinement in the rector’s office in another tweet: “I am locked up with quite a few supporters at the University of Lleida, they will have to break in to arrest me and imprison me,” he wrote.

This Sunday, the Prosecutor’s Office of the National Court responded to the rapper’s appeal of his imprisonment and denied a suspension of the sentence. As a result Hasél is expected to be arrested and imprisoned, now that the Friday February 12 deadline for his voluntary entry into prison has elapsed.

Hasél was sentenced to nine months and one day in prison by the Appeals Chamber of the National High Court in September 2018, and fined approximately €30,000, for controversial lyrics and social media posts. These included more than 60 messages between 2014 and 2016 in which he praised ETA [Basque separatist paramilitary] members, including former military chief of the organization, the late Joseba Arregi, who Hasél said had been tortured by the Police and the GRAPO, and Isabel Aparicio, arrested in October 1979 and “exterminated as a communist,” according to Hasél’s lyrics and posts. The court had reduced the initial penalty of March 2018, imposed by the Criminal Chamber, of two years and one day in prison. The Supreme Court confirmed the decision of the National Court.

On Monday, the Board of Directors of the University of Lleida (UdL), for its part, demanded that Hasél guarantee “the rights of students and staff and the integrity of the institution itself.”

The board of directors has indicated, in a statement, that the right to protest “cannot in any way cause personal or property risks to the university and its people.”

The university maintains that the free movement and access of students and workers to their places of study and work “is a non-negotiable point that must be made compatible with the right to protest, also legitimate.”

The board of directors has also assured that it supports, for university students and for citizens, “freedom of expression, in line with the judgments already issued by the European Court of Human Rights, which has warned of the irregularity of the survival of legal provisions contrary to the European doctrine of respect for human rights, including that of [freedom of] association, protest, and expression.”

On Monday night a group of students and sympathizers organized a demonstration in front of the rector’s office in solidarity with the progressive Catalonian artist who is opposed to Spain’s monarchy, plagued with numerous scandals, primarily of corruption and money embezzlement.

Featured image: Hasél this Monday in the University of Lleida. Photo courtesy of Arainfo.org.