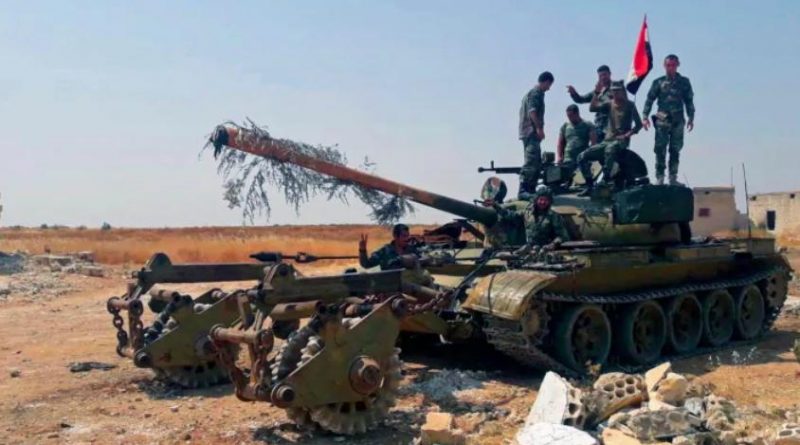 BEIRUT, LEBANON (12:35 A.M.) – The Syrian Arab Army (SAA) is within one kilometer of the strategic city of Khan Sheikhoun in southern Idlib, a military source told Al-Masdar News this evening.

According to the source, the Syrian Arab Army’s advance this evening has put them in position for a potential attack on Khan Sheikhoun.

Led by the Tiger Forces, the Syrian Arab Army was able to capture the Khan Sheikhoun Farms this evening after resuming their offensive in the southern countryside of the Idlib Governorate.

RELATED CONTENT: Iran: US Statements on Establishing so-Called “Safe Zone” are a Provocation and Interfere in Syria’s Internal Affairs

At the same time, the Syrian Army has begun storming the nearby town of Rakaya and the hilltop of Tal Nar, which are both located northwest of Khan Sheikhoun.

If the Syrian Army does storm Khan Sheikhoun, it will be from the city’s western axis, as their advance to the eastern flank of the city has currently been forestalled by the jihadist rebels near Sukayk.

The jihadist rebels of Hay’at Tahrir Al-Sham and Rouse the Believers launched a big counter-offensive on Saturday morning to retake Sukayk.

While they were unable to retake Sukayk, they did manage to retake some points north of the town.

Featured image: Syrian army soldiers flash the victory sign as they stand on a tank in northwestern Syria on Tuesday. Government forces captured five villages in the country’s northwest early Wednesday. (SANA via The Associated Press)