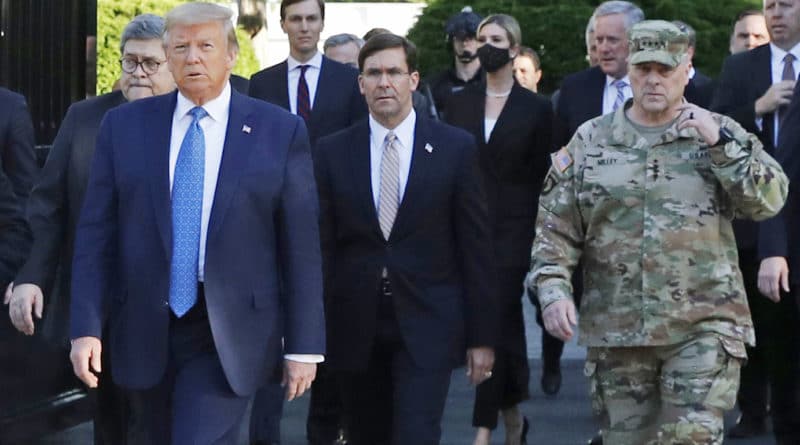 The head of the United States General Staff, General Mark Milley, admitted Thursday that he was wrong to accompany the president on a photo op after a peaceful demonstration was suppressed, an indication that the split between Donald Trump and the Pentagon is deepening, reported the AFP agency.

“I shouldn’t have been there,” said the general who issued this statement after Pentagon chief Mark Esper distanced himself from Trump last week.

The controversial incident occurred on June 1st, when Trump walked from the White House to take a photo of himself holding a bible in front of the nearby Church of Saint John, vandalized the day before during protests against police brutality following the death of George Floyd, a Black American suffocated by a police officer in the most recent incident of systemic racism and police brutality.

In a moment of national debate on racial discrimination, “my presence at that time and in that environment created a perception of military participation in internal politics,” the commander acknowledged.

“We must scrupulously respect the principle of an apolitical military body, which is deeply rooted in the essence of our republic,” added the general.

The images of the military man in a combat suit with Trump were used by the White House in a video with electoral overtones, which dismayed Milley, said a Pentagon source.

“I swore to defend the Constitution. I could never have imagined that troops who took the same oath could, under any circumstances, have violated the rights of their citizens,” Mattis criticized in The Atlantic.

The former secretary went further and said that he could not have conceived that high-ranking military officials would pose in a photo, absurdly, with the president.

The White House defended Trump’s photo by claiming that it sent a forceful message and even compared it to British Prime Minister during World War II, Winston Churchill.

But the episode seems to have sparked an awareness among the military high command, who for the third time publicly expressed their differences with the executive.

The current head, Mark Esper, of the Pentagon went from referring to the situation as “a battlefield” on June 1, evoking the possibility of sending several active troop units near Washington to control the situation in case of need by civil authorities, to publicly distancing himself from Trump two days later.

Precedents
“I do not support the use of the Insurrection Law,” Esper said June 3, referring to a decree that allows the president to deploy active-duty soldiers to disperse mobilizations rather than use the National Guard, a corps of reservists. The Pentagon chief also expressed his regret.

“I do my best to remain apolitical and to avoid situations that may seem political,” he said. “Sometimes I achieve it and sometimes I don’t.”

This week, Esper and Army Secretary Ryan McCarthy declared themselves open to studying a proposal to change the name of ten military bases named after Confederate Generals, the group of southern states of the United States that during the Civil War fought for a secession to keep their slaves.

Trump immediately voiced his categorical opposition to this idea on Twitter.

This is not the first time that the White House has been accused of politicizing the military. In June 2019, during a visit to Japan, the president asked that a missile-launcher destroyer named in honor of the late Senator John McCain, a staunch critic of Trump, to be placed out of his sight.

Analyst’s have raised concern in recent days about the internal frictions between the White House and the US military hierarchy, to the point that some have raised the possibility of a coup d’etat or the equivalent by US standards.

The signing by Trump on Thursday of an executive order sanctioning the International Criminal Court (ICC) and their employees, currently investigating US military crimes in Afghanistan since 2003 is considered by some analysts as Trump’s move to ease tensions due the fact that most of the crimes investigated by the ICC were committed by the US military.