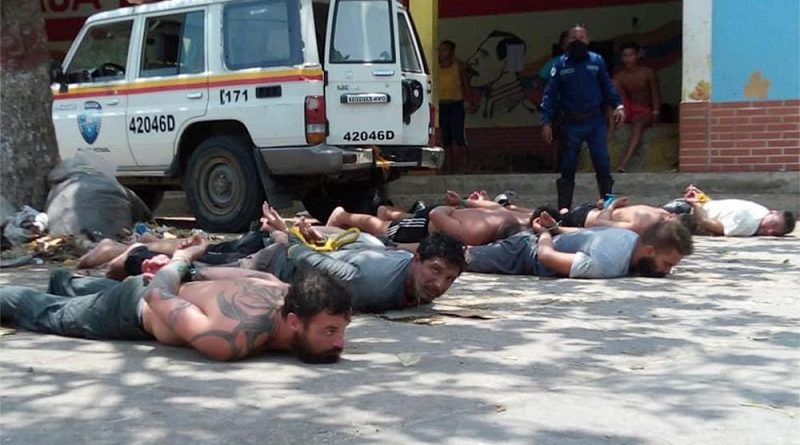 Let’s put the U.S. government on the side for a moment. We know about its long-standing goal of regime change. We all know that President Trump has denied any U.S. involvement in the raid. That was to be expected but not to be believed. We would like to focus on some of the implications of this raid that come from three sources: self-appointed president Juan Guaidó and two videos with declarations from key players.

By Nino Pagliccia  –  May 6, 2020
In the early morning of May 3, Venezuela witnessed the first attempt of a raid by speedboats with armed mercenary forces on the central coast of Venezuela, just a few kilometers from the capital city, Caracas. The response by the Venezuelan armed forces and the almost continuous updates about the action including photos and videos were quick.

Just a couple hours later, while the defensive operation was still underway, Venezuela’s Minister of Interior Nestor Reverol issued an initial statement, “A group of terrorist mercenaries attempted a maritime invasion, entering Venezuela with speedboats via the coast of La Guaira. Their aim was to assassinate leaders of the Bolivarian Revolution and carry out a coup.” The suggestion that the raid – already a grave act of aggression – had such menacing consequences was not far-fetched given past attempts to overthrow the Maduro government, including attempted assassinations.

The Venezuelan Minister of Defense, Vladimir Padrino, injected inspiring words in his official communiqué, “The Bolivarian National Armed Force categorically rejects these acts of irrational violence, before which we have always been victorious in defense of the Homeland, unfailingly clinging to the Constitution.”

Diosdado Cabello, president of the National Constituent Assembly and vice-president of the governing party PSUV (United Socialist Party of Venezuela), provided a conclusion of the initial defensive action that ended “with an unfortunate balance of eight deceased, two detained people who were there; a lot of significant weapons, in addition to vehicles that they had ready to carry out actions directly on institutions and authorities.”

Cabello also warned of more possible raids and launched a call to the population in general to be watchful for any suspicious or irregular activity, particularly along the Venezuelan coast. Consequently, the following day, on May 4, more armed mercenaries were apprehended thanks to the quick reporting by fishermen in the contiguous coastal area of Aragua State.

At his point, two important facts are to be noticed: The prompt documented official reporting of events, and more importantly, the consistent concurrence on the facts from the different branches of the government, including the population, that has been qualified as a true civic-military-police success.

Full details of those facts with some analysis of the implied tactical strategies pursued by the mercenary attack can be read here and here for the May 3 and May 4 incidents, respectively. But other side stories and revelations lead us to ask, what can we say about the coordination of this ongoing coup attempt, the coup plotters involved, and the expected outcome were the coup to succeed?

Let’s put the U.S. government on the side for a moment. We know about its long-standing goal of regime change. We all know that President Trump has denied any U.S. involvement in the raid. That was to be expected but not to be believed.

We would like to focus on some of the implications of this raid that come from three sources: self-appointed president Juan Guaidó and two videos with declarations from key players.

In a tweet on May 3, Guaidó dismissed the mercenary attack as a “false flag” by the Maduro government to hide social problems, although a day later he changed his tune in a video interview by suggesting that the “dictatorship” had infiltrated the armed group. This shows that Guaidó was not aware of the upcoming incursion on Venezuela.

Further evidence that he was not part of the planning can be inferred from a video where Venezuelan former National Guardsman Javier Nieto Quintero appears next to former U.S. Green Beret Jordan Goudreau. Nieto introduces Goudreau as a “member of the special forces of the U.S. army who also runs the Florida-based company Silvercorp USA to provide services to handle the whole spectrum of crisis situations”, and is reported to “organize a military expedition aimed at ousting Venezuelan President Nicolas Maduro”. The video announces the raid as part of a so-called armed struggle, “Operation Gideon”, and is a call to the Venezuelan military and people to join in the overthrow of the Maduro “regime”.

What is striking is that in the two-and-a-half-minute-long video, not once is there a reference to Guaidó as the “legitimate interim president” of Venezuela and that the incursion also intends to support his claim.

On the contrary, in another video,Goudreau is interviewed from an undisclosed location by Miami-based Venezuelan journalist Patricia Poleo. The main thrust of the interview revolves around a contract shown and allegedly signed by Silvercorp’s Jordan Goudreau, Juan Guaidó, and other representatives. The existence of such a contract was revealed several weeks ago but never shown before. Goudreau claims that Guaidó breached the contract by failing to pay the convened US$1.5 million for his “services”. That was mentioned to be the reason why “the ‘liberation’ of Venezuela was not achieved.” But surely Goudreau must have had his eyes on the larger multimillion-dollar “reward” promised by the Attorney General as a bounty for the capture of Nicolas Maduro and other high-ranking Venezuelan officials.

The statements made by those who masterminded the recent mercenary armed incursion on Venezuela – that was quickly neutralised by the Venezuelan forces – do not seem to have had Guaidó in their minds in the event that their hoped-for attempted coup was a success.

In fact, the coup plotters apparently never included Guaidó in their plans. A news item by Reuters states, “In Washington, a source familiar with U.S. intelligence assessments described the incursion as a ‘private enterprise’ and said it was not believed to have been carried out with Guaido’s knowledge or approval.”

Not only was Guaidó absent from any consideration for involvement in the raid or in the future Venezuela envisioned by the coup plotters, but Guaidó was directly targeted by a disgruntled foreign mercenary claiming that he was not paid for his “work”. This widely distributed information was timely released by a Venezuelan journalist who is not a supporter of Maduro but a supporter of a more radical right-wing opposition. This can only be construed as intentionally meant to harm Juan Guaidó in the eyes of all Venezuelans, and any claim he might have to leading Venezuela.

This also occurs at a time when Guaidó seems to be losing international support for failing to be a catalyst force among Venezuelans and bringing the Venezuelan Army to a mass mutiny. At the same time, Secretary of State Mike Pompeo’s recent release of a “Framework for a transition in Venezuela” seems to leave Guaidó out of a potential new government, at least until new U.S.-suggested presidential elections in Venezuela.

Behind these events, we observe a deepening of the division in the right-wing opposition, but a more dangerous one that Washington will gladly use to its advantage. The escalation in Venezuela from violent riots to armed mercenary incursions and sabotage, likely aided by the U.S. and its proxy Colombian government, indicates that the Hybrid War on Venezuela is moving to the next stage of aggression that might degenerate into an armed civil confrontation. The strong and committed resistance of a united government, its Bolivarian defense forces, and a patriotic population can defuse the aggression. However, Venezuelans and all Latin Americans in the region should be alert and concerned about the human cost.