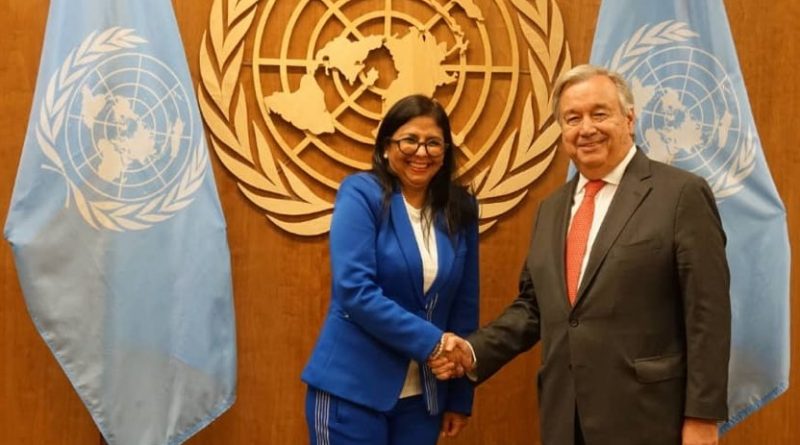 According to conventional wisdom, the Trump administration, as well as its regional allies in the Lima Group and the Venezuelan opposition, were set to intensify the diplomatic war on the Venezuelan government at the U.N. General Assembly. However, they only managed to demonstrate how far removed their coalition against President Maduro is from convincing the international community that deadly sanctions and a coup are the way forward for Venezuela.

Their plan had several goals: increase the number of countries that recognize Juan Guaidó (the president of the National Assembly who was anointed interim president of Venezuela by the Trump administration); link Venezuela to Colombian guerrilla groups; and convince more countries to impose sanctions. There was even a plot “to revoke Venezuela’s status at the United Nations,” as The Grayzone’s Anya Parampil reported.

On the first point, the Trump administration remains unsuccessful. 54 countries announced their support for Guaidó’s coup over a period of weeks in January and February of this year, leading Trump officials to believe that more countries would join every week. Now, eight months after the coup began, the number has remained almost stagnant; it is currently at 55 after El Salvador elected a neoliberal government. In fact, as it has become clearer that the Guaidó coup has failed, several European governments, including Spain, Portugal and Germany, have tried to play it both ways: recognizing Guaidó while carrying on relations with the Maduro government.

Although 55 seems like a large coalition, it is dwarfed by the rest of the world. The other 138 countries in the United Nations – representing 80% of humanity – have refused to back the coup. This includes countries such as Norway, Italy, Mexico, Uruguay, China, Russia, India, Pakistan, Indonesia, South Africa and Nigeria.

While there is a lot of hand wringing over China and Russia recognizing Nicolás Maduro as president, there has been very little scrutiny of the countries that are included in the 55 nation coalition, which features human rights violators and governments in crisis. In particular, it is worth looking at the human rights records of the coalition members within the region. In Colombia, for example, more than 700 social leaders and human rights activists have been murdered in the past three years. The Ecuadorian government declared a state of emergency as mass protests are rocking the country following an announcement of neoliberal reforms mandated by the International Monetary Fund. The Honduran government is mired in allegations of drug trafficking at the highest levels. The Argentinean government has seen poverty double during its economic crisis (and will likely be voted out on October 27; the new government is expected to recognize the Maduro government). In Peru, their unelected president has just dissolved the legislature as state-backed xenophobia terrorizes Venezuelan migrants. In Brazil, the Amazon burns, black people are killed with impunity and massive protests flood the streets. These countries use Venezuela as a prop to divert attention from their own problems, much like President Trump, whose anti-socialist discourse on the campaign trail consistently features Venezuela, Cuba and Nicaragua. 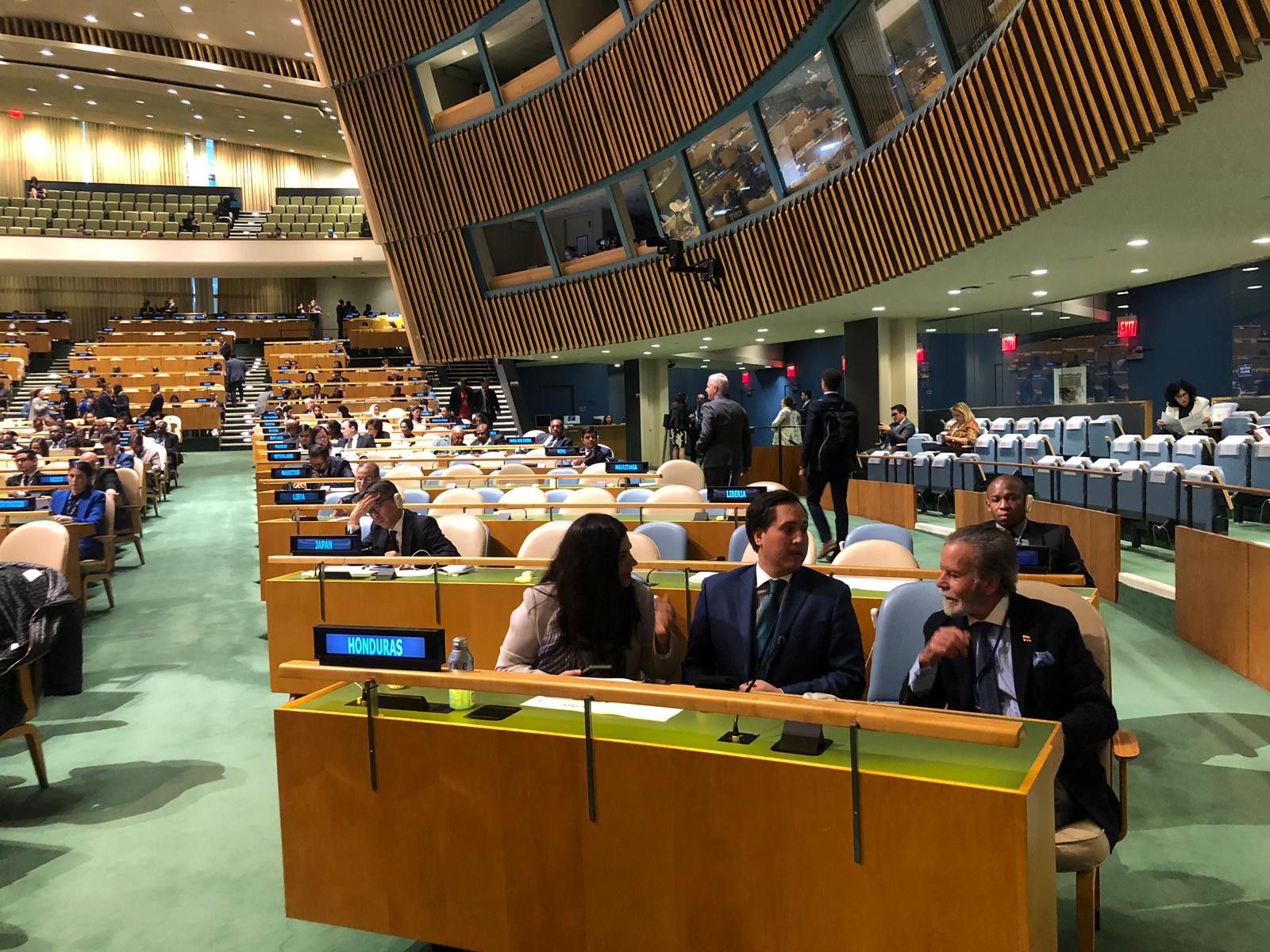 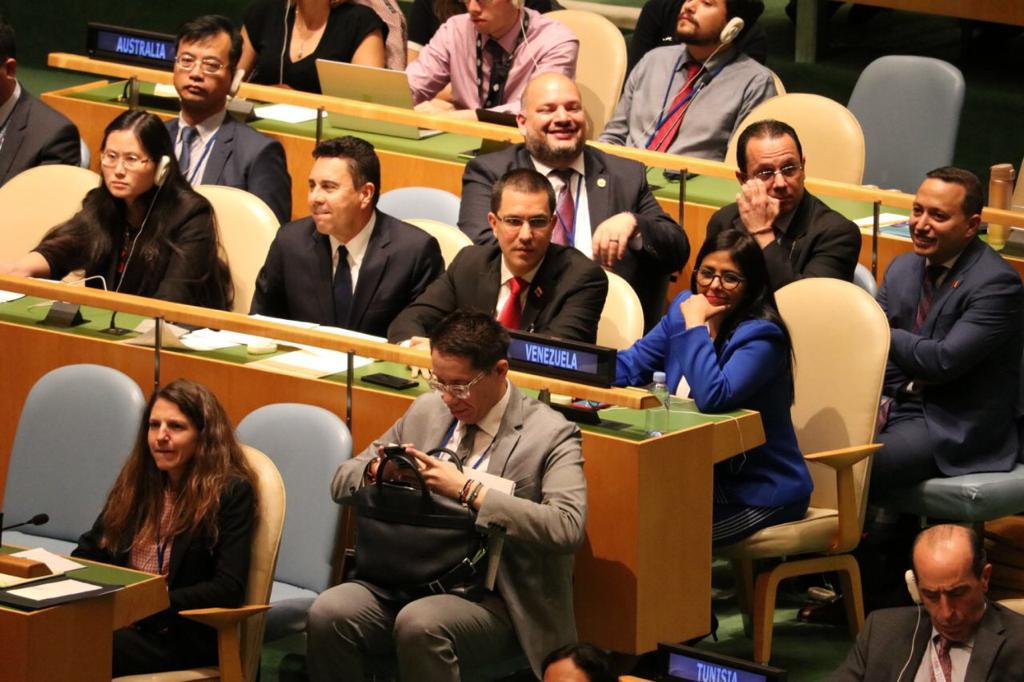 At the United Nations and its dozens of affiliated institutions, like the World Health Organization, the Food and Agriculture Organization and the United Nations Human Rights Council, there is no doubt who Venezuela’s legitimate leaders are. At the U.N. Human Rights Council in Geneva, the Venezuelan opposition sought a Commission of Inquiry into the country’s human rights record. Instead, what they got was a fact-finding mission (which is of a lesser category than a commission) and an unintended consequence: the Council reiterated that Venezuela “needs a solution reached by Venezuelans without foreign interference” and denounced the impact of U.S. sanctions on the Venezuelan people’s human rights.

In New York, Venezuelan Vice President Delcy Rodríguez addressed the U.N. General Assembly and met with U.N. Secretary General António Guterres, to whom she presented the recently signed agreement between the government and opposition sectors. In a blow to the opposition, the Secretary General refused to meet with Juan Guaidó. Instead, the governments of Honduras, Brazil and Colombia invited opposition representatives to sit with their delegations.

The presidents of these three countries joined President Trump in mentioning Venezuela in their U.N. speeches, though in fairness, their addresses were not as isolationist, nationalist and frankly, as boring, as Mr. Trump’s. The Honduran president – in power because of a coup and subsequent fraudulent elections – astonished listeners by accusing Venezuela of engaging in “fourth generation warfare” against his government. President Jair Bolsonaro of Brazil – another coup beneficiary who was elected because the country’s most popular politician is in jail – denounced the alleged presence of 60,000 Cuban “agents” in Venezuela, although considering his country’s health care policies, perhaps he was referring to Cuban doctors. His speech was condemned by Amazon Watch as “outrageous, undemocratic, racist, and deeply violent.”

But it was Colombian President Iván Duque who ended up embarrassing himself the most. For several weeks, the Colombian government and the Venezuelan opposition had been hyping President Duque’s speech, where he was to present a report and show definitive proof of Colombian guerrillas in Venezuela. The report, which has yet to be released to the public, is based on an article in Colombian magazine Semana that has already been debunked. The “proof” consisted of four photographs of guerilla training camps, which Mr. Duque claimed were taken in Venezuela. Within hours of his speech, it was revealed that one of the photographs was taken by newspaper El Colombiano in the Colombian region of Cauca in 2015. The other three were later proven to have been taken in Colombia by AFP. This is not the first time that fake or mislabeled images have been used in attempts to discredit Venezuela. The blunder cost Colombia’s Chief of Military Intelligence his job and has led to international mockery of President Duque.

Just prior to the U.N. General Assembly, Argentina, Brazil, Chile, Colombia, El Salvador, Guatemala, Haiti, Honduras, Paraguay and the Dominican Republic joined the United States and Guaidó’s representatives in invoking the Inter-American Treaty of Reciprocal Assistance, or Rio Treaty. This treaty, a Cold War relic signed in 1947, was last invoked after the September 11, 2001, attacks, and establishes that an attack on one country is an attack on all. However, the treaty’s validity is undermined by the fact that it has been losing members left and right. Mexico withdrew in 2004, followed by Venezuela, Bolivia, Ecuador and Nicaragua in 2012. The latest to withdraw is Uruguay, which denounced the treaty days after it was activated against Venezuela and warned that it was “opening a path to armed intervention.” For its part, the State Department claims the treaty will allow regional countries to have a framework for imposing broad economic sanctions against Venezuela. Yet its own rhetoric leaves open the possibility that it can be used for an invasion, with language declaring the treaty as the “supreme law of the land,”  raising questions of whether the Rio Treaty could be used to circumvent Congress and the War Powers Act.

Even if the treaty is only used for the imposition of sanctions, one of the immediate goals of its invocation is to pressure European countries to follow the U.S.’s agenda against Venezuela. Although the European Union has imposed sanctions on individuals and on the sale of arms, they have so far refused to apply economic sanctions. Broader sanctions from Latin American countries would give the Europeans cover for imposing similar sanctions. Elliott Abrams, U.S. Special Envoy for Venezuela, travelled to Europe in September as part of this pressure campaign and made the ridiculous claim that sanctions would offer “a better chance for negotiations to succeed.” (The sanctions are the greatest impediment to a negotiated agreement, as the Venezuelan government insists upon the lifting of sanctions, yet the opposition has no control over them.) The Europeans refused to take the bait, even while they imposed travel and financial restrictions on seven intelligence officials. These sorts of individual sanctions have a much lesser impact on the population at large than President Trump’s killer sanctions and they are far from what the Trump administration and Venezuelan opposition desired.

It is a wonder that more heads haven’t rolled at the White House and State Department over their repeated failures to overthrow the Maduro government, especially considering the most recent humiliations at the U.N. General Assembly. The State Department’s primary responsibility has been to carry out the diplomatic front of the war on Venezuela, yet the coalition they have built has been unable to convince the world to join them, has failed at imposing multilateral sanctions, and relies almost entirely on regional allies that are undergoing crises of their own. So far, the diplomatic war is being won by the Maduro government, but the Venezuelan people continue to suffer from the brutal U.S. sanctions.