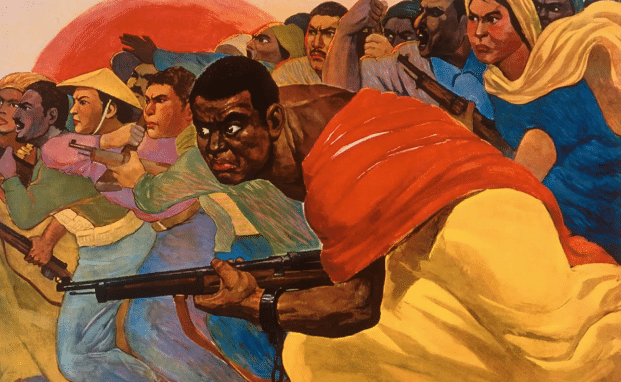 In 1969, Fred Hampton – chairman of the Illinois chapter of the Black Panther Party – said: “we saying that theory’s cool, but theory with no practice ain’t shit.” He elaborated this statement in another speech that he gave in the same year: “I don’t care how much theory you got, if it don’t have any practice applied to it, then that theory happens to be irrelevant. Right? Any theory you get, practice it. And when you practice it you make some mistakes. When you make a mistake, you correct that theory, and then it will be corrected theory that will be able to be applied and used in any situation. That’s what we’ve got to be able to do.”

Hampton’s words continue to be relevant. In the current conjuncture, Western Leftists – with a few principled exceptions – have been denigrating and viciously condemning concrete mass struggles and socialistic experiments in the Global South from a perspective of self-congratulatory moral purism. Their worldview is informed by a fundamental disconnect between theory and practice. The Western Left follows a strategy of utopianism in which it first imaginatively fashions an “ideal” society and then turns to the question of its achievement. Here, socialism is sought to be created ex nihilo, through a mechanical application of certain ideals to the given reality.

In contrast, the experience of Third World leftists – engaged in real working-class struggles – indicates that socialism is a complex process comprising the following two moments described by Konstantinos Kavoulakos: “the moment of rupture, of the emergence of the new out of the contradictions of the present, and the moment of its gradual development on the basis of new contradictions occurring in the process each time.” The fact that socialism has to be constructed through a concrete movement of contradictions means that practical work – however rough and theoretically unpolished – is necessary for exploring those realities. In other words, the only way we get to know the socialist universal is through contradictory particulars – party, people, organization etc.

Socialists, therefore, have to search for the future that is immanent within the present, rather than exploit the ideological discrepancy between bourgeois society and some abstract ideals. While the former forms a socio-political praxis derived from the actual complexity of reality, the latter leads to an impotent cultural criticism that is incapable of determinately negating capitalism. Thus, Western leftists frequently oppose the supposed reformism of Global South socialist states and make abstract declarations of an immediate revolution. Such ideological operations fail to understand the fact that communists must maintain close contact with the working class, tuning in with their existing mood and facilitating the internal development of their consciousness.

In this process, experience is accumulated whose importance was succinctly outlined by Paul Lafargue: “Criticism does not begin to be fruitful instead of futile, until it comes after experience, which, better than the most subtle reasoning, makes us sensible of imperfections and teaches us to correct them. Man first used the clumsy stone hammer, and its use taught him to transform it into more than a hundred types, differing in their raw material, their weight, and their form.” Since the Western Left does not have experience, its strategy and tactics are dictated by a practically inapplicable comprehension of the pure form of the laws of capitalism. In their view, the logic of capital unfolds via a series of mediations into a totality whose surface consists of non-economic appearances where people see the world through the prism of commodities.

As the capitalist totality is always dominated by the homogeneous time of profit-maximization, singular phenomena can be perceived as expressions of the whole; all parts of the whole linearly reflect an economic essence. Insofar that capitalism is conceptualized as an invariant and underlying structure that generates a self-reproducing totality of ideological appearances, there is no space for politics, for a practice that can destroy capitalism through the identification and intensification of its multiple contradictions. As Alex Demirovic writes: “Since there could be no…understanding of the future effects of present appearances, there could be no…politics. At best, this position holds, change can only be thought of in terms of a complete systemic collapse of the totality or as the transition from one moment to the next.”

The mass movements of Global South leftists have shown that capitalism can’t be destroyed through a merely contemplative comprehension of its economic laws. Instead, these laws are tendential and politico-historical in nature, to be understood only in relation to a specific social context. Guglielmo Carchedi comments: “The movement (change) of social phenomena (change) is tendential, i.e. at any given level of abstraction (given a section of reality under scrutiny) some social phenomenon is a tendency and others are the countertendencies.” In other words, we need to highlight the process of determination which starts from the simple relation of production, and ends with the concrete complexity of the social system.

“Capitalist relations are always articulated with other production relations”, notes Bob Jessop, “and are, at most, relatively dominant; moreover, their operation is always vulnerable to disruption through internal contradictions, the intrusion of relations anchored in other institutional orders and the lifeworld (civil society), and resistance rooted in conflicting interests, competing identities, and rival modes of calculation.” These intermeshing social relations can only be detected when the Left tries to meet the masses where they are at in terms of their consciousness; in this way, it will be able to observe how the mechanical law expressed at the level of the production process is translated into organically interconnected relations of forces through the everyday resistance and socio-cultural activities of the subalterns.

RELATED CONTENT: Murder of Fred Hampton was Domestic Version of My Lai Massacre

The ability of the Third World Left to produce an adequate practical form of a theory, capable of increasing its capacity to know, is closely linked to its involvement in mass organizational work. With the help of this practical activity, the Southern Left avoids the error of prefabricating socialist strategies in utopianistic manners – the actual content of the communist goal does not exist in advance but is crafted through the social relations of knowledge embodied in processes of collective engagement, intervention and confrontation. There is no sovereign subject of the Enlightenment tradition that contemplates socialist thoughts in an individualized way. Instead, there is the party – the apparatus that produces political subjectivities through a real movement of contradictions on the terrain of struggle. The contours of this unity of theory and practice were brilliantly outlined by Mao Zedong:

“In all the practical work of our Party, all correct leadership is necessarily ‘from the masses, to the masses.’ This means: take the ideas of the masses (scattered and unsystematic ideas) and concentrate them (through study turn them into concentrated and systematic ideas), then go to the masses and propagate and explain these ideas until the masses embrace them as their own, hold fast to them and translate them into action, and test the correctness of these ideas in such action. Then once again concentrate ideas from the masses and once again go to the masses so that the ideas are persevered in and carried through. And so on, over and over again in an endless spiral, with the ideas becoming more correct, more vital and richer each time. Such is the Marxist theory of knowledge.”