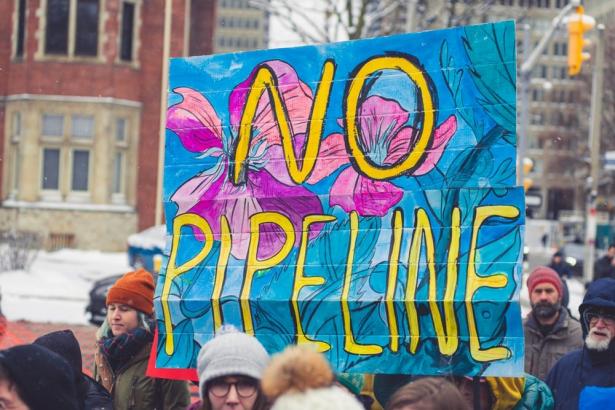 Protests have brought rail travel in Canada to a standstill and introduced the fight against Coastal GasLink to the broader public.

Last week, Via Rail, one of Canada’s major train operators, canceled most rides across Canada after Canadian National Rail, the company that owns most of the tracks Via’s trains run on, shut down its eastern network. The rail lines had become a target of protests against the TC Energy-backed Coastal GasLink Pipeline, a 416-mile natural gas project that cuts through the traditional territory of the Wet’suwet’en Nation.

While the pipeline has the backing of 20 elected First Nations councils, including Wet’suwet’en municipal leadership, the Wet’suwet’en hereditary chiefs—the stewards of the land who say they have final title rights—have not given their consent to the project. In January, the Royal Canadian Mounted Police (RCMP) conducted a raid to break up the encampments the Wet’suwet’en had set up to block pipeline workers from the land. And earlier this month, law enforcement conducted more raids, making 28 arrests over a five day period. Beneath the roar of their helicopter’s blades, dressed in tactical assault gear with loaded rifles, the RCMP aimed their weapons at peaceful First Nations land defenders.

WARNING: This video contains graphic images of an armed threat on the lives of land defenders Denzel Sutherland-Wilson (Gitxsan) and Anne Spice (Tlingit). It may be traumatic for many to see. But we feel strongly that it should be available to witness. #WetsuwetenStrong pic.twitter.com/SDu6GDHpn6

From the outset, it looked as though this would be an uneven fight between the resisting Wet’suwet’en and the combined economic, political, and militaristic forces of the state and its allies in the energy industry. But over the past week, other First Nation governments began to release statements in support of the Wet’suwet’en. College students organized walkouts. Bridges were blocked, ports were stalled, and railroad tracks were blockaded. The Wet’suwet’en encampments had become a flashpoint in a larger struggle for Indigenous sovereignty—and against a warming planet.

Supporters of the pipeline project, including John Horgan, the premier of British Columbia, have built a campaign around the “rule of law,” a reference to the largely de facto legislation and environmental and cultural reviews drawn up to legalize pipeline projects. But the Wet’suwet’en hereditary chiefs and their allies have rejected this framing: The camps are a form of protest, but the Wet’suwet’en presence on the land is not. The pipeline is the intrusion—not the other way around.

They have also responded with physical resistance: Mohawk citizens have formed blockades of the major railway systems that have rippled across the country, holding up both passenger and freight trains, halting economic exports and leisurely travelers. A coalition of allies across British Columbia are placing their bodies in front of Ministry buildings in Victoria, standing against the hollow talk of reconciliation from Canadian politicians.

“People feel inspired by what’s happening here and the strength of our hereditary chiefs,” Wet’suwet’en Governance Director Molly Wickam told The New Republic. “But we’re inspired equally by the strength of the rest of the country, from coast to coast, and what people are willing to do.”

The response from Canadian officials has been predictable: RCMP officers have threatened journalists trying to cover the raids. Horgan, who also spoke to the Assembly of First Nations two months ago and claimed to understand that “reconciliation is not just words,” has decried protest efforts. Talking about a blockade of a government building, Horgan said that that “people were denied access to their workplace, not because of their political views but because they were seen as symbols of government—that’s unacceptable.”

Conservative Leader Andrew Scheer called upon those enforcing the blockade to “check their privilege,” an attempt to reframe the issue by appealing to those affected by the rail closures. Deputy Prime Minister Chrystia Freeland, after squeezing past protestors to enter the Halifax City Hall, said that “it is very important for all people in Canada, including government officials, to be able to go about their rightful and legitimate business.” Prime Minister Justin Trudeau, currently on a trip in Africa, told reporters in Senegal that while it’s crucial to “respect the right to freely demonstrate peacefully,” Canada is a “country with a rule of law and we need to make sure those laws are respected.”

They are setting a trap, trying to pit Indigenous land defenders against the non-Indigenous population and claiming themselves as allies to the “working man” or whatever false story they want to tell. But the story is slipping away from them, if slowly.

“[The media is] starting to talk about our territories as unceded sovereign territories and land defenders and Wet’suwet’en people and governance, and not talking about us as if we’re just protestors off the street, which I think was one of the biggest problems with how mainstream media has been covering this story,” Wicksham said of how coverage of the anti-pipeline movements has recently shifted. She added that she felt as though the media reports in the past have too often focused on the divisions within the Wet’suwet’en community over whether to allow the CGL pipeline, instead of centering the fact that their traditional governance structure is being ignored by Canadian politicians.

Now, in addition to progressive outlets like Vice and The Tyee offering the Wet’suwet’en perspective in their coverage of struggle, even outlets like the CBC, which does operate an Indigenous affairs desk, have taken the time to run explainers on the landmark Supreme Court case that undergirds the hereditary chiefs’ claim to jurisdiction.

The Wet’suwet’en, along with other Indigenous land defenders across North America, have posed a question to their non-Indigenous neighbors: Who is being more unreasonable, the Indigenous people enforcing their sovereignty and history on the land, or the government and extractive companies literally cooking the planet? Even a few years ago, the state may have felt confident in how the public would respond. But as we’re seeing right now, that’s no longer a given.

Nick Martin is a staff writer at The New Republic.