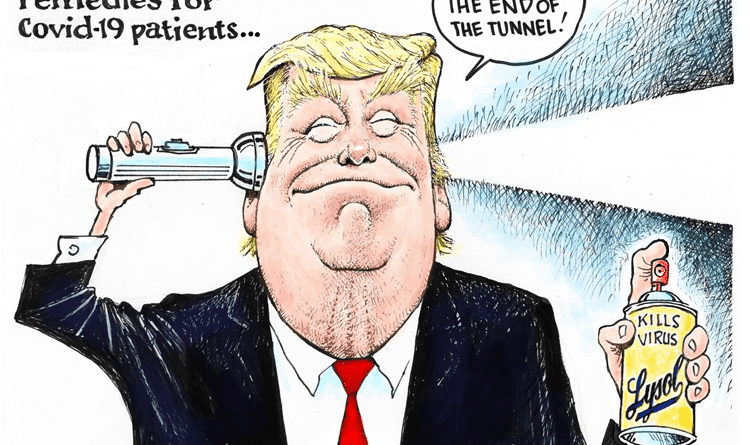 Thursday night, after a completely farcical coronavirus press briefing from President Donald Trump, the White House put out a transcript of the event that falsely showed Dr. Deborah Birx supporting one of his ridiculous ideas. By Friday morning, the White House was forced to issue a correction of its transcript showing that, in fact, the coronavirus response coordinator had shot down the president.

During the briefing, Trump and others discussed new research about the effects of sunlight and disinfectants on the coronavirus that causes COVID-19 on surfaces in the environment. As I’ve discussed elsewhere, Trump pushed truly bizarre and reckless claims about the disinfectants. And while not as obviously dangerous, he also raised the naive idea that because sunlight can kill the virus in the environment, he thought it could be used as a treatment.

“Deborah, have you ever heard of that?” Trump said, turning to the doctor sitting against the wall in the briefing room. “The heat and the light, relative to certain viruses, yes, but relative to this virus?”

Here’s where the correction comes in. According to the first, false transcript, the White House claimed Birx said: “That is a treatment.”

In fact, as the White House now acknowledges, she said the opposite: “Not as a treatment.”

RELATED CONTENT: Despite the Siege, Venezuela Controls the Coronavirus

Get a load of Dr. Birx's demeanor after Trump tells her, "I would like you to speak to the medical doctors to see if there's any way that you can apply light and heat to cure [coronavirus]." pic.twitter.com/TP0QoSzkYl

View the incorrect and corrected transcripts below: It’s not clear, of course, if the mistake was somehow an intentional effort to cover up for the president. There’s little likelihood that it would work, given that Trump’s remarks were broadcast live and were likely to be replayed. But it’s always unsettling when the White House makes factual errors that seem to present the president in a better light than the truth.