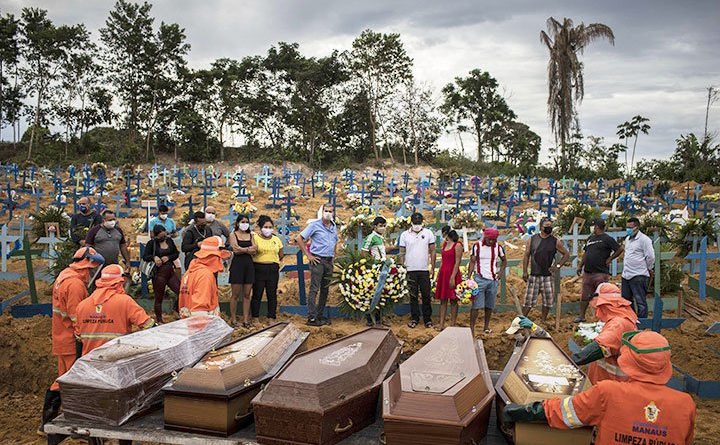 Ecuadorian Guayaquil, Amazonian Manaus in Brazil, Iquitos in Peru and Mexican Tijuana suffer more harshly from the ravages of Covid-19.

Hospitals with few beds and no X-rays, tours of the river from 6 hours to 3 days to go to a health center, corpses lying on the streets covered with a sheet. The Ecuadorian Guayaquil, the Amazonian Manaus in Brazil, Iquitos in Peru and the Mexican Tijuana are four of the cities in Latin America that suffer more harshly from the ravages of the coronavirus, a disease that has shown no regard for anyone.

In these places, which are not the largest in their countries but became the epicenter of the pandemic, the health and funeral systems have collapsed, or are about to do so, due to the uncontrolled way in which the disease is advancing, leaving already more than 125,000 cases and 6,000 deaths in the region, according to the latest data from the World Health Organization (WHO). And worse: the maximum peak of the Covid-19 has not even reached and is expected in mid to late May.

Dead bodies in the streets of Guayaquil “Guayaquil has experienced one of the greatest tragedies in its history,” said Cynthia Viteri, mayor of a town that condenses many of the coronavirus dramas in Latin America, on Friday April 24. The second largest city in Ecuador went from being the economic center of the country to the scene of a Dantesque situation: people taking corpses out of their homes and leaving them in the streets with a sheet on, people desperately searching for weeks for their relatives in the morgues and then enduring a wait of up to four days to bury them.

With at least 520 deaths and 10,400 official infections, Guayaquil has 51% of the cases across the country, which is aggravated when knowing that Guayas, the province of which it is the capital, has added almost 8,000 “extra” deaths since it began the health crisis in the country on February 29 and of which, the authorities themselves acknowledge, it is almost impossible to know the exact figures.

“In a graveyard here in Guayaquil before the pandemic they had an average of 10-20 burials a day. Then I saw the list of deceased and they had 140 at 5.30 in the afternoon,” Merwin Terán, president of the Association of Funeral Directors, told EFE, to later add: “They cannot tell me that they are not Covid-19 victims because … Where did so many dead came from? That was Covid-19, there is no other explanation.”

To all this is added that with the passing of days, the contempt in the streets for the orders of confinement is palpable and, for example, last Monday and Tuesday long lines of vehicles were seen on the main bridge entering the city, like it’s a normal business day.
“The increase in mobility is very worrying and dangerous. In the last week the increase in Guayaquil is 17.7%. If we let our guard down we will lose more lives,” President Lenín Moreno wrote on Twitter. In Manaus, the emergency affects both the living and the dead. Hospitals have collapsed and coffins no longer fit in their largest cemetery, so the bodies are now going to be put to rest in mass graves: from an average of 20 to 35 daily burials it has gone to almost 100.
Very few beds and almost no equipment for severe cases, refrigerators recently installed in a hospital to make up for the lack of space for corpses, health workers in white suits, masks and gloves moving bodies and bulldozers opening trenches in the cemetery.

The “state is extremely absent,” denounced Luigi Fernandes, who suffered the death of his 67-year-old mother-in-law a couple of weeks ago because of the Covid-19 and who said that the hospital where she was hospitalized for 8 days X-rays was useless, it only had one respirator and they had to buy the drugs themselves.

An x-ray that shows by itself that the 2,270 confirmed cases and the 193 deaths that are officially reported in the Brazilian Amazon are far from the true dimension of the problem in this area of northern Brazil.

The other countries “can help with resources, with medicine remittances, rapid tests, protection equipment, because many doctors are working without equipment (…),” Virgilio Neo, mayor of that city, told Efe last Wednesday that with 1.8 million inhabitants concentrates almost half of the population of the state of Amazonas.
Hopeless in the Peruvian Amazon
Some 700 infected and 23 dead. Although the Loreto region occupies the fourth place in Peru, these are numbers that in the current situation of the pandemic do not seem catastrophic but have already caused the morgue of the provincial hospital, in the heart of the Amazon, to exceed its capacity and not be able to receive more corpses, while those who remain are piled up inside black garbage bags.

Iquitos, the largest city in the Amazon in Peru, is the one where most of the problems of the region are concentrated, in which containment measures such as quarantines or the use of masks are practically non-existent and that also includes the indigenous communities around it, who live far from hospitals and health centers.

From six to eight hours and up to three days by river. That is what it takes the inhabitants of the area to get to those health posts.

“More than 60% of the communities lack medical posts and those that exist have shortages, do not have equipment or medications and it is difficult to apply the intercultural approach,” the Organization of Indigenous Peoples of the East (Orpio) based in Iquitos complained days ago.

Therefore, the Orpio and other indigenous organizations warn: if the coronavirus outbreak is not contained, the damage will be dramatic.
Hospital saturation on the Mexican border with the US “We are on the verge of saturation.” Thus, emphatically, in an interview with Efe, the Mexican undersecretary of Prevention and Health Promotion, Hugo López Gatell, referred to the situation in Tijuna, on the border with the United States, and where until that day there had been reported 588 infections and 89 deaths, more than half of the total in Baja California, to which it belongs.

Although currently the hospital occupancy in that state is between 44.9% and 73.02%, depending on the site, and with a use of 69% of the respirators available, what worries authorities is that the maximum peak of the disease is estimated to occur between May 8 and 10 and Tijuana, along with Mexico City, is the epicenter of the pandemic in the country. In addition, recently the state governor, Jaime Bonilla, said that the health workers are “falling like flies” due to the lack of protection and security at the Mexican Institute of Social Security (IMSS).

A conjuncture with which the regional authorities are preparing for a saturation of the health system, despite the fact that Baja California, and “in particular Tijuana”, is where the greatest compliance occurs with social isolation measures, with 74%, according to the president of Mexico, Andrés Manuel López Obrador, recognized this Friday.