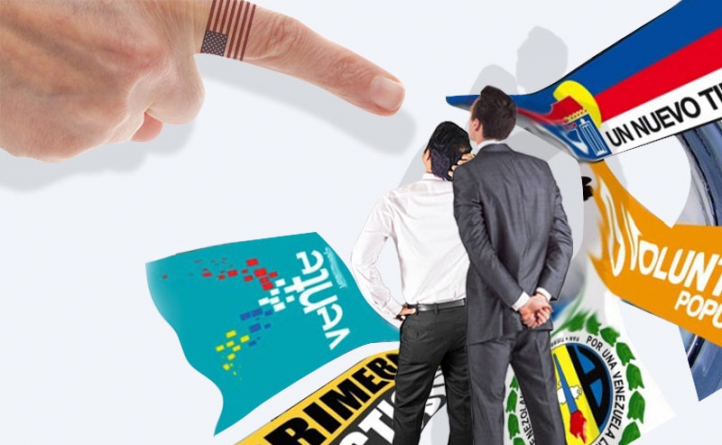 By Clodovaldo Hernandez
The team fails and the boss, instead of taking responsibility, blames the underlings. Have you seen that scene? Have you experienced a situation like that? Surely, because it is commonplace in workplaces, sports and even family life.

Right now we can appreciate it in a global scenario: the United States’ plan to overthrow the constitutional government of Nicolás Maduro has failed, and Secretary of State, Mike Pompeo, far from accepting his share of the blame in the disaster, says that this is a consequence of the lack of unity in the Venezuelan opposition.

This lack of unity is an indisputable reality, but in the current circumstances it looks more like an excuse, since the phase of the “regime change” plan that formally began last January (but has been running since the beginning of 2018, when the negotiation process in Dominican Republic was trampled following express orders of Pompeo’s predecessor, Rex Tillerson) has had the direct leadership of the United States. Faced with that voice of command, the vast majority of the opposition subgroups either have obediently joined the plan or have gone mute for radical characters to take center stage. If there is something the US can not complain about is the lack of support from the Venezuelan Anti-Chavismo to do and undo in this last attempt.

Over the past five months of the year, only a few opposition voices have risen against the basic lines of the US-led plan. Claudio Fermín, Eduardo Fernández and Enrique Ochoa Antich stand out, all leaders of minor organizations within the opposition, who have dared to contradict the interventionist line of “all options are on the table”. No major party of the ex-MUD has questioned the imposition of Juan Guaidó as president in charge or its questionable legal instruments with respect to national assets abroad or its favorable positions for a US military invasion.

The strategy endorsed by Washington of setting up a parallel government and forcing a change through collective asphyxia has been backed up without much gossip by most of the opposition forces. Can it be said then that the problem is the lack of unity?

Everything indicates that Pompeo only tries to control damage to his own political field, to make it seem that the attempted overthrow has not failed because of the team of which he is a part (along with Donald Trump, Mike Pence, John Bolton, Elliott Abrams, Marco Rubio and Rick Scott, among other “hawks”), but of the Venezuelan leaders, whom, by the way, it’s very easy to blame.

What is the opposition archipelago like?
In any case, the lack of opposition cohesion is not a surprising discovery of Pompeo’s. Strictly speaking, in the two decades of revolutionary governments, the opposition has practically never been united, among other reasons because the only common factor that many of its components have is hatred of Chavismo, but there are multiple and mutually exclusive ambitions for a so called stage of transition and for what would come next.

Some of the factions are clearly identifiable because they have remained stable over time, while other groups have changed their positions.

We can speak of a structural division that comes from the origin: on the one hand there is the democratic and electoral wing, which is committed to gain power through votes. This sector can claim several of the most significant victories that antichavismo has had in twenty years: the rejection of the constitutional reform in 2007; the overwhelming triumph in the parliamentary elections of 2015; and all the successes of opposition candidates in regional and local elections.

But it is proven that the electoral group has not been firm in its position. Each time the violent wing has assumed control (April 2002, guarimbas of 2004, 2014 and 2017 and the attempted overthrow currently underway), its leaders choose to retreat pending the possible results. They wait crouched to join the eventual transition if violence, coup or foreign intervention pay off.

One of the best demonstrations of this occurred on April 30, when prominent leaders of the moderate wing presented themselves to the Altamira distributor to support an eminently insurrectionist action.

The media rules
On several occasions, the electoral group has been subjugated by the extrapartisan power of the media. This was the case in 2005, when the coalition, then called the Democratic Coordinator, “decided” to withdraw from the parliamentary elections to boycott them. According to leaders such as the secretary general of Acción Democrática, Henry Ramos Allup, that decision was imposed by the owners of the large media outlets in Venezuela.

In present times, those traditional media (printed newspapers, open-air television and radio stations) no longer have the same ability to impose their points of view, but have been replaced by the media machinery formed by global bodies, the new independent self-identified media and the influencers of social networks. The destruction of the dialogue instance of the Dominican Republic and the boycott of the presidential elections of 2018 were works of that [legacy media] machinery, always obsequious to US strategies.

Dialogue and anti-dialogue
Apart from whether or not they support the electoral solution, the cracks between anti-Chavistas also pass through the point of dialogue. One faction believes that one can and should open a dialogue with the government, and the other one thinks the opposite.

This is one of the groups that has been unstable, changing. In 2017, after the madness of four months of violence and in view of the successful move by Nicolás Maduro to take the constitutional route (with the elections for the Constituent Assembly), the MUD agreed to dialogue. In those conversations, the leading role was Primero Justicia’s, through Julio Borges. On the other hand, Popular Will (Voluntad Popular or VP) remained in the radical anti-dialogue position, along with small but insidious factors such as Maria Corina Machado’s party. In the current initiative, that of Norway, VP has the starring role. There are strong indications that each factor decides to dialogue or not depending on the level of visibility that can be achieved.

Furious Exile
Another important actor in anti-Chavismo behavior is furious exile. Among them there are several fugitive leaders of the Venezuelan justice (Antonio Ledezma, Julio Borges, Carlos Vecchio, David Smolansky, among others) and a real battalion of minor figures but with media influence, including corrupt businessmen, editors, journalists and celebrities. This grouping of vanities projects an image of the Venezuelan opposition that is far from positive.

At the same time, it is an element of disturbance for the performance of the opposition leaders who are in the country and for the base of anti-Chavista militancy. Most of them are promoters of violent solutions and contrary to dialogue, so they poison the environment whenever a possibility of understanding arises.

The neo-antichavistas
The opposition group is now complemented by cadres from Chavismo, some of whom are also in “exile” (with files pending with the Venezuelan justice system or after having declared themselves “persecuted”) and others remain in the country.

These individuals, who in some cases are part of old or new organizations, have joined the opposition subgroups: some are electioneering, others are supporters of violent options; some are pro-dialogue and others, anti-dialogue.

Among the prominent figures there are several who aspire to embody the role of the missing link and present themselves (openly or discreetly) as possible consensus rulers between Chavistas and antichavistas. With them is applied to perfection that funny saying: “eramos muchos y pario la abuela” (as if we didn’t have enough problems already).