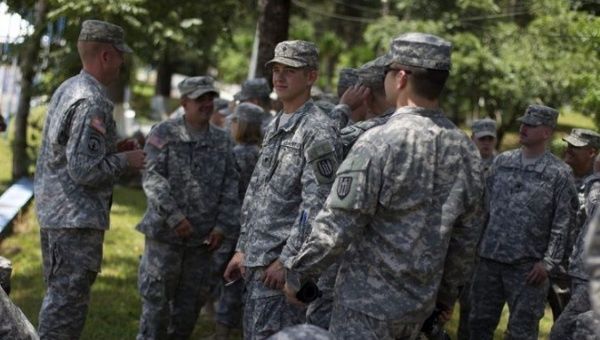 Some 300 more U.S. soldiers will supplement their Latin American and Caribbean allies to improve disaster response and “other crisis situations.”

Another Southern Command brigade of U.S. Navy and Marine soldiers arrived in Honduras this week as part of what the U.S. Embassy in Honduras has called “a multi-national disaster response task force” released Tuesday.

Some 300 members of the Special Purpose Marine Air-Ground Task Force – Southern Command (SPMAGTF-SC), more widely known as Southcom (or in Latin America as Comando Sur), will work together with their Latin American and Caribbean counterparts to improve response to disasters and “other crisis situations” as well as strengthen international security forces throughout the region.

The U.S. Navy brought with them extensive training equipment which will be used throughout various military exercises in the future.

Southcom has been a controversial actor in Latin American politics for many years since its founding as a force to defend U.S. interests at the Panama Canal. The commander of Southcom, U.S. Admiral Craig Faller has intimated that the force could be reoriented for intervention in Venezuela by aiding the opposition:

This new deployment of troops under the auspices of humanitarian assistance is an event that happens to coincide with widespread civil unrest in Honduras which has grown to a fever pitch as Hondurans clamor for a voice against the neoliberal policies of their President Juan Orlando Hernandez (JOH). Incidents like the burning of a door at the United States embassy in the capital of Tegucigalpa and the attacks on offices belonging to subsidiaries of U.S.-owned multinationals are among recent news coming out of the country.

The protests started as demonstrations and strikes by teachers and doctors protesting what they believe to be privatization efforts by JOH’s administration, but appear to have grown into more than that.

The SPMAGTF-SC press release explained, “This deployment will allow our partners to improve regional capacities and carry out humanitarian assistance and disaster relief operations. In addition, it will provide the Marine Corps with an opportunity to improve its agility in these types of situations.”

This most recent deployment also comes just in time for the start of hurricane season in the Atlantic which will extend from June 1 to November 30.

The special force unit plans to work in El Salvador, Guatemala, and Honduras, as well as parts of Colombia, Peru, and Brazil later this year.

Southern Command covers 31 countries and is responsible for providing guidance on intelligence, operations, and security cooperation in Central and South America, and the Caribbean as a way to protect military resources of the United States.