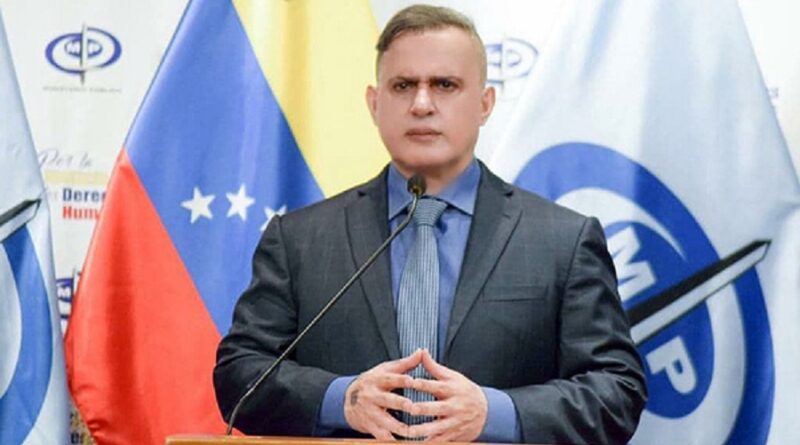 Venezuelan Attorney General, Tarek William Saab, announced that the director of the National Land Institute (INTI) in Guárico state and two other officials of that organization have been apprehended for alleged links to acts of corruption. From the headquarters of the Public Ministry in Caracas, Saab explained that Pedro Carpio (director of the regional entity) and Miguel Aponte (coordinator in Zaraza) were brought in after being named in several complaints by other officials of that state, as well as the peasants of the area.

The process began “after a complaint made by the citizen Juan Rengifo, who reported that workers attached to INTI illegally demanded the delivery of a thoroughbred horse in return for processing a file with the organization.”

Saab said the report led to an investigation in Valle de la Pascua, a procedure in which “Wilmer Hernández (a private individual) and Óscar Rondón (official of the National Land Institute in Altagracia de Orituco) were apprehended,” he said.

Saab pointed out that a telephone scan carried out on the devices of Hernández and Rondón made possible the establishment of links between Carpio and Aponte and the events in question, leading to the issuing of their respective arrest warrants. Likewise, INTI expert technician Carlos Mirabal was determined to be involved in the illegal activities.

The investigation detailed that the officials “demanded large amounts of money to process legal details related to updating documents, assigning land, and irregular administration of files, claiming that if the required payments were not delivered, the files would not be processed,” he said.

“For this reason an arrest warrant was requested, with Pedro Carpio being arrested on June 15 and Miguel Aponte on June 16.” In turn, the highest institutional spokesperson specified that Mirabal is a fugitive and could be apprehended at any time.

Regarding the four detainees, the Attorney General specified that “they were prequalified for the crimes of aggravated extortion, aggravated corruption, aggravated association, and forging public documents.”

Illegal arms sales and trafficking
The highest authority of the Public Ministry also reported the arrest of two men who intended to sell a large amount of weapons and ammunition. They were apprehended last February in the state of La Guaira by troops attached to the General Directorate of Military Counterintelligence (DGCIM).

“Five thousand US dollars was seized from the detainees at their residence, as well as nine different types of weapons, 34 chargers for pistols and a rifle, in addition to 1,580 bullets for different weapons. Four vans were also seized,” added the prosecutor general.

Those apprehended were Geovanny Manuel Millán and Maiquer Eloy Hernández, who were charged on March 23 for the commission of illicit arms trafficking, terrorism and criminal association. Both face sentences ranging from 15 to 25 years.

Likewise, Tarek William Saab reported on the apprehension of Karel José Farías and Johan Orlando Romero, which occurred on February 20 in the vicinity of Playa Pintada, both “carrying different types of weapons and ammunition inside the bodywork of two vehicles.”

As a result of the inspection of the vehicles, 798 items of weaponry were confiscated, including four rifles, 29 rifle magazines, two grenade launchers, a trigger set for a rifle, a recoil spring for a rifle, an arming lever for a rifle and 700 cartridges.”

Farías and Romero were indicted on April 9 for illicit arms trafficking and criminal association.

Balance
The attorney general highlighted that during the year 2021 the Public Ministry has processed 85 cases in which the crime of illicit arms trafficking has been investigated, in which 137 people were arrested.

These proceedings included the discovery and confiscation of “53 pistols, 18 rifles—of which three were AK47s, four AK103s, and the remainder AR1s, four submachine guns, one machine gun, nine shotguns, nine grenades, 2,300 cartridges and 8,208 bullets.”

For this reason, Tarek William Saab emphasized that “the Venezuelan State is and will always be implacable faced with these arms-trafficking mafias, since these cases represent an attack not only on the stability and peace of the country but also threaten the security of the nation.”