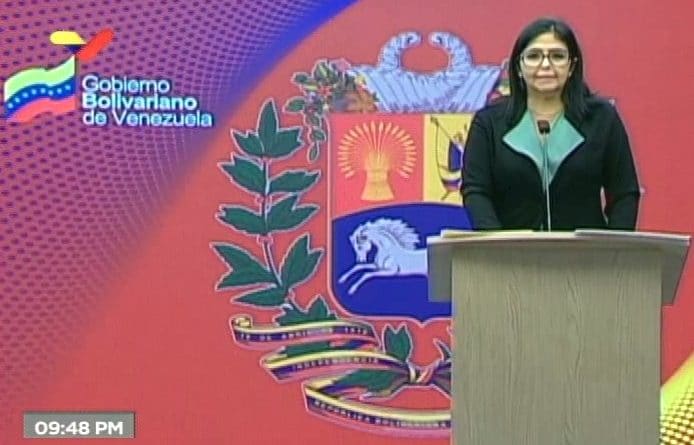 The vice president of Venezuela, Delcy Rodríguez, reported this Thursday from the Miraflores Palace 198 new Covid-19 cases out of which 133 are of community transmission, 59 are people who returned from Colombia infected, 2 from Brazil, 1 of Peru, 1 from Ecuador and 2 were infected by contact with international travelers. In addition, she reported one deceased woman.
Regarding the deceased, Rodríguez explained that it was a 67-year-old woman from Zulia state, Maracaibo municipality. She was hypertensive and had type II diabetes. She started symptoms on June 3 and went to a health center on June 11. She had a very complicated situation, she was admitted to intensive care on June 18 but she had a cardiorespiratory arrest that caused her death. The vice president mourned the loss and extended her condolences.
There are 39 deaths in total. The vice president insists that everyone must be very careful and take care of themselves and their love ones.

Out of the 133 community transmission cases, 84 come from the Zulia state, 12 are from the Miranda state, 9 from Lara, 6 from Carabobo, 5 from Bolívar, 4 from the Capital District, 4 from Sucre, 4 from Falcón, 2 from Anzoátegui, 2 from Mérida and 1 from Trujillo.

RELATED CONTENT: Venezuela Declares War on “Trocheros” for the Health of the People

The executive vice president reported a total of 65 imported cases, of which 59 are people who returned from Colombia, 2 returned from Brazil, 1 from Peru and one from Ecuador. In addition, there are 2 cases of contact with international travelers: one from Apure and the other in Bolívar state.

Delcy Rodriguez reported that 1,176,146 tests of Covid-19 have been performed to date, equivalent to 39,205 tests per million inhabitants.
She noted that there are 4,563 cases in total. 2,763 are asymptomatic, 420 have mild acute respiratory failure, 5 moderate and 9 severe.
1,327 patients have recovered (29% of cases). The vice president asked these people to donate plasma to create therapeutic treatments to cure other patients. She reported that plasma treatments have been done in some patients and in some cases they have been very positive.
She reiterated the call for the Colombian government to act responsibly, because by not doing so they are attacking the Venezuelan people. Likewise, Delcy Rodríguez reiterated again and again the call to the entire Venezuelan population to take care of themselves and take all measures to protect themselves from the Covid-19 coronavirus and follow the social distancing protocols.