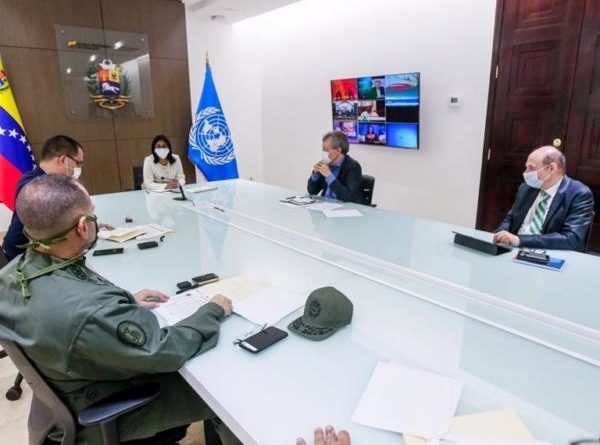 May 1, 2020.- On Thursday the coordinators of the United Nations System (UN) in Venezuela requested authorization from the national government to study the strategy of (suppression) of the Covid-19 pandemic, with the objective of replicating it in other nations, as was announced by the Executive Vice President of the Republic, Delcy Rodriguez.

“They talk about it being a strategy of suppression, that’s what it’s called epidemiologically, and they are asking for authorization to study this model in the hope of being able to replicate it in other countries,” said the Vice President after a roundtable discussion by the UN at the Miraflores Palace.

Rodriguez explained that during the meeting, the officials of the international organization highlighted the model and the epidemiological route that allowed the country to register a flattening of the propagation curve.

She also said that the representatives of the global entity highlighted the measures that Venezuela applied in time, as well as the appropriate relaxation of the quarantine.

Likewise, the Vice President pointed out that the Pan American Health Organization (PAHO) has access to the diagnostic results, and added that they explained to the UN about the next phase of testing to be carried out by Venezuela.

“The accumulation of molecular tests are moving ahead and we are continuing and emphasizing the Barrio Adentro method which allows us to go house by house in order to make early mass detection,” she added, and also stressed that they made the system aware that the second phase will be implemented in the coming days.

In this regard, President Nicolas Maduro stressed that “we have made great progress, but we have not finished the first phase while we are planning for the implementation of the second,” he said that the key to the success of the first stage to contain the virus has been the unity, social discipline, quarantine and mass screening.