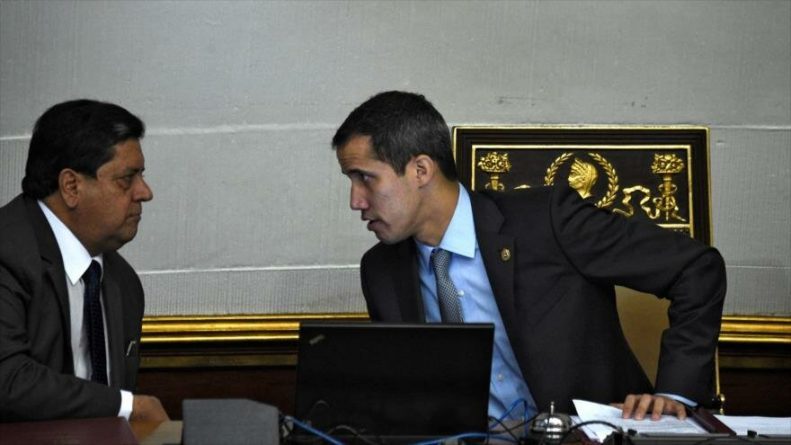 International News
May 10, 2019May 10, 2019 orinocotribune arrest, coup d’etat, Edgar Zambrano, Guaido, Justice, lost in space, Trump not knowing what to do, US Imperialism, US puppets

Trump’s administration and Guaidó warn the government of Nicolás Maduro in Venezuela that the arrest of the vice president of the National Assembly (AN) will have “consequences”.

Agents of the Bolivarian Intelligence Service (Sebin) arrested Edgar Zambrano on Wednesday for following the call of the self-proclaimed “president in charge” of Venezuela, Juan Guaidó, during the failed military uprising on April 30.

“The arbitrary detention” of the vice-president of the opposition-majority parliament “is illegal and inexcusable. Maduro and his accomplices are directly responsible for Zambrano’s safety. If he is not released immediately, there will be consequences,” according to a message published on Wednesday in the Twitter account of the closed US embassy in Caracas.

Guaidó, head of the AN, -the organ of opposition majority declared in contempt- said for his part that “whoever ordered this action will have to assume the consequences of crimes that are not prescribed.”

Guiadó, who led the coup attempt, described as “absurd” the arrest of Zambrano. “If in Miraflores they believe that with persecution they take away the freedom from some of us, we are going to demonstrate in the streets that each kidnapped, each persecuted and each murdered are translated into new reasons to get them out of power as soon as possible and put an end to the usurpation “, he said.

After the deactivation of the coup against Maduro, the National Constituent Assembly (ANC) of Venezuela announced that it would lift parliamentary immunity from all legislators linked to the failed military rebellion against Maduro’s presidency.

Venezuela is going through a period of great turbulence due to Guaidó’s self-proclaimed “interim presidency” of the country, with the support of the United States, despite the fact that Maduro, legally elected at the polls, began his second term on January 10. .

US President Donald Trump has threatened, on several occasions, a military intervention in Venezuela to overthrow Maduro. For their part, the Venezuelan authorities have asserted that they will not remain with their hands folded and will defend their sovereignty and territorial integrity in the face of Washington’s hostility.

Despite threats and pressure from the US government, the Bolivarian National Armed Forces (FANB) has repeatedly assured that “it will stand firm in defense of the Constitution and its legitimate authorities” and will continue to support the legitimate president of the country.