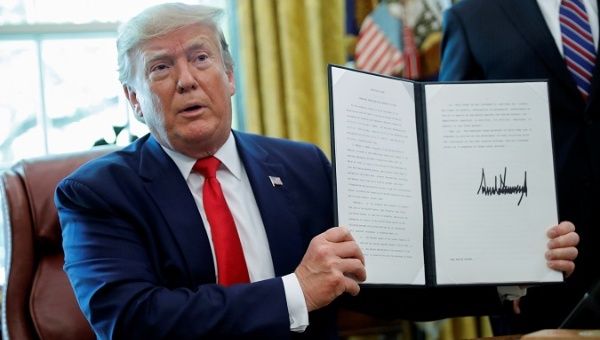 Trump also said the sanctions would have been imposed regardless of the incident over the drone that was downed by Iran over entering its airspace with no permission.

Trump told reporters he was signing an executive order for the sanctions amid tensions between the United States and Iran that have grown since May, when Washington ordered all countries to halt imports of Iranian oil.

Trump also said the sanctions would have been imposed regardless of the incident over the drone. He said the supreme leader was ultimately responsible for what Trump called “the hostile conduct of the regime.”

The Trump administration wants to force Tehran to open talks on its nuclear and missile programs and its activities in the region.

Iran said on Monday U.S. cyber attacks on its military had failed, as Washington sought to rally support in the Middle East and Europe for a hardliner stance.

Washington has blamed Tehran for attacks on tankers in the Gulf in recent weeks, which Iran denies. On Monday, the United States said it was building a coalition with allies to protect Gulf shipping lanes.

In a joint statement on Monday, the United States, Saudi Arabia, the UAE and Britain expressed concern over Middle East tensions and the dangers posed by Iranian “destabilizing activity” to peace and security in Yemen and the region.

Iran has denied carrying out such attacks against the tankers and said its own navy was involved in rescue operations of the crews following the incidents. Progressive voices and international bodies have called for an independent investigation into what happened in order to avoid a conflict based on Washington’s politically motivated accusations.

The confrontation between Iran and the United States heated up last Thursday when Iran shot down a U.S. drone, saying it had flown over its airspace and came close to attacking Iranian military targets.

Trump claimed that he aborted a retaliatory airstrike 10 minutes before it was to go ahead.

Trump said he decided the strike, to punish Iran for shooting down the drone, would have killed too many people.

U.S. media have reported that Washington launched cyber attacks last week even as Trump called off his air strike. The Washington Post said Saturday that the cyber strikes, which had been planned previously, had disabled Iranian rocket launch systems.