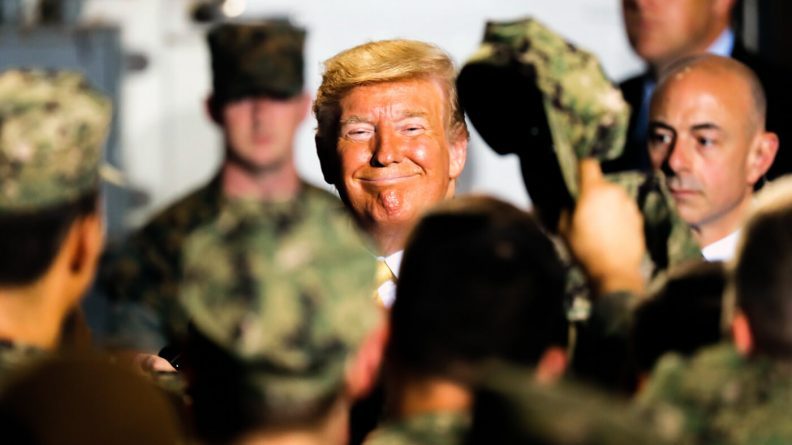 “What is the message to the soldiers and to the world if blatant war criminals are pardoned, while Chelsea Manning and Julian Assange are severely persecuted for exposing war crimes?” — Gerry Condon, Veterans for Peace

President Donald Trump has already made clear his soft spot for war criminals, having brought one – Elliot Abrams – into his administration. Then, earlier this month, Trump pardoned Army First Lieutenant Michael Behenna. Now, reports indicate Trump is just getting started.

And while Trump appears to be making moves to pardon more war criminals, those who have exposed war crimes, including whistleblower Chelsea Manning and journalist Julian Assange, are charged with contempt of court and espionage.

Lieutenant Behenna was sentenced to 15 years behind bars in 2009 for shooting a man to death who had been stripped naked and interrogated in connection with a roadside bomb.

RELATED CONTENT: Assange is Reportedly Gravely Ill, And Hardly Anyone’s Talking About it

This pardon is a presidential endorsement of a murder that violated the military’s own code of justice.

Military leaders, including Trump as commander-in-chief, should prevent war crimes — not endorse or excuse them.”

More pardons on tap
Undeterred by such sharp rebukes, Trump is reportedly preparing to pardon a handful of other war criminals. That’s according to two U.S. officials who spoke on the condition of anonymity to the New York Times.

Among those slated for pardon is Special Operations Chief Edward Gallagher, a Navy SEAL accused of stabbing a “defenseless” and wounded teenager receiving medical treatment. He and his platoon then took photos of themselves standing over the corpse. Gallagher is also accused by fellow SEAL snipers of shooting a teenage girl wearing a flower-print hijab from a sniper’s nest while she was walking with her friends. They also say he shot an unarmed old man.

Gallagher is set to stand trial “in the coming weeks.”

In honor of his past service to our Country, Navy Seal #EddieGallagher will soon be moved to less restrictive confinement while he awaits his day in court. Process should move quickly! @foxandfriends @RepRalphNorman

The New York Times’ sources say that Trump put in expedited requests for the “paperwork needed to pardon the troops” around Memorial Day.

An Army Green Beret — Maj. Mathew L. Golsteyn, who has yet to face trial over the killing of an unarmed Afghan man in 2010 — is also reportedly being floated for a pardon, as are a group of Marines who urinated on the corpse of a dead Taliban fighter and then posted a video of it to YouTube.

A private security contractor with Blackwater who was found guilty of shooting “dozens of unarmed Iraqis” may also be pardoned.

This sends absolutely the wrong message to the troops — it invites them to become cold-blooded murderers.”

“We are not talking about a confusing combat situation here — this is not the ‘fog of war.’ We are talking about the pre-meditated stabbing murder of an unarmed prisoner and the sniper rifle murders of random civilians.”

Delivering pardons to these men sends a clear message that American soldiers are above the law, experts argue. “It raises the prospect in the minds of the troops that says, ‘Whatever we do, if we can get the folks back home behind us, maybe we can get let off,” retired military judge Gary Solis told the Times.

Justice upside down
Trump’s not-so-subtle wink to troops wondering what they may be able to get away with comes alongside his crackdown on those who would — or have — exposed such crimes. Chelsea Manning blew the whistle on the U.S. military’s extrajudicial killings by leaking drone footage of pilots gunning down civilians and journalists in the infamous “Collateral Murder” video. Meanwhile, Julian Assange, who published the video, is charged with 17 counts of espionage by the United States in a case that could ultimately see him put to death.

One wonders the substantive difference between the potential execution of Assange and the executions for which Trump plans to dole out pardons.

What is the message to the soldiers and to the world if blatant war criminals are pardoned, while Chelsea Manning and Julian Assange are severely persecuted for exposing war crimes?”

Condon said that Manning and Assange should be pardoned, but cautioned that “pardoning” denotes a crime and said they committed none. “They should have their charges dismissed and be let go.”