On Monday, the president of the United States, Donald Trump, ordered the massive deployment of the military and police to stop the protests that are taking place nationwide as part of the reaction against the murder of the African-American George Floyd at the hands of police officers. “I am the President of law and order,” he said at the beginning of his statement from the White House.

Trump immediately invoked Law 1807, which allows the mobilization of military forces in the country. “I am mobilizing all available federal resources , civil and military, to stop the rioting and looting, to end the destruction and arson, and to protect the rights of law-abiding Americans, including their Second Amendment rights,” he said before journalists.

Illinois Gov. J.B. Pritzker on Monday called on President Donald Trump to dial back what the governor characterized as incendiary rhetoric in the wake of the death of a black man in Minneapolis police custody https://t.co/gS7yEYQh9L

The president told governors that they must “deploy the National Guard to take to the streets.” An audio of the meeting Arum held with governors was leaked to the media and the whole world could hear the White House occupant ordering more repression and blaming the governors for what has happened in the last week, while Governor Pritkzel from Illinois replied, saying that he considers Trump’s rhetoric the main cause of the uprising.

“Mayors and governors must establish the overwhelming presence of law enforcement until violence is quelled,” Trump reiterated in that context, adding that “if a city or state refuses to take the actions that are necessary to defend life and the property of its residents, then I will deploy the United States military and quickly solve the problem for them. ”

Regarding the country’s capital, Trump has promised “to take swift and decisive action” to end the violence during the protests, adding that what happened in Washington last night “was a total disgrace.” A few minutes later hashtag #DictatorTrump was twitter’s number 5 trending topic in the US.

“Right now, I am sending thousands upon thousands of heavily armed soldiers, military personnel and law enforcement officers,” he said.

Those who threaten the lives of innocents and property will be detained, arrested and prosecuted to the fullest extent of the law. I want the organizers of this terror to know that they will face severe criminal penalties and long prison terms,” he stressed.

According to Trump, the violent protests and looting were organized by “professional anarchists” and “criminal anti-fascists.” 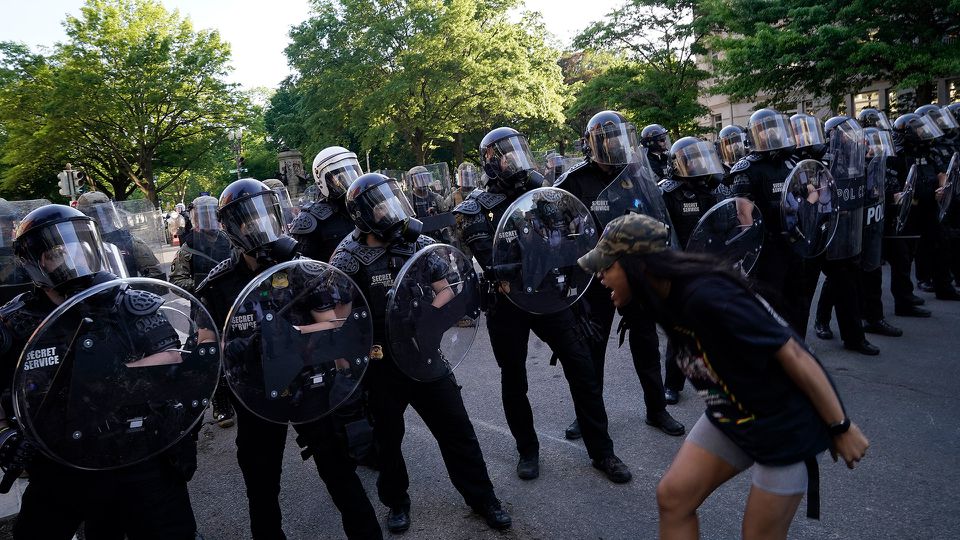 In his speech he also took a few moments to say that there will be justice for Gorge Floyd’s family, but he devoted most of his words to insisting that the protests will stop.

Photo in the church
After his speech, and amid the protests a few blocks away, Trump walked, heavily escorted by his security team, to the Episcopal Church of Saint John, across the street from the White House, which was graffitied by protesters. in previous days. 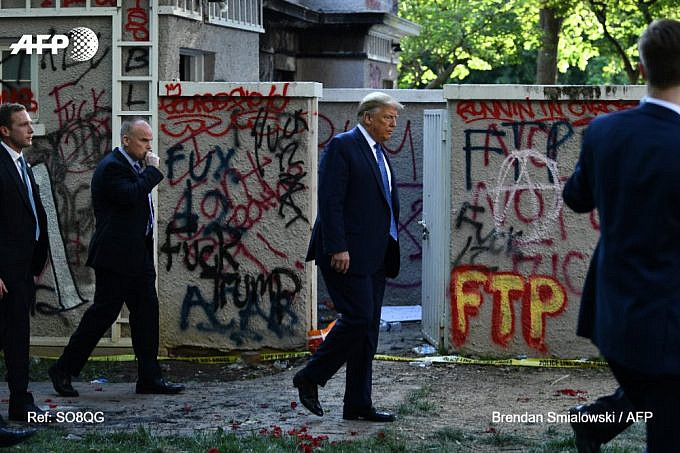 CNN reported that peaceful protesters in that sector were dispersed by security forces using tear gas and rubber pellets, in order to give Trump a “photo opportunity” in the church.

#DictatorTrump had rubber bullets thrown and tear gassed peaceful protesters all so he could pose in front of St. John's Episcopal Church, DC holding a bible.

Upon arriving there, the President of the United States had photos of himself taken holding a Bible, and stated: “We are going to come out of this situation very strong.”

In different US cities Massive protests have been taking place following the death on Monday of George Floyd, a 46-year-old African American, shortly after being arrested for alleged “ongoing fraud.” Curfews in tens of cities in the US have not stop protestors demanding change in the culture of systemic racism that prevails in the United States and affecting people of color.

George Floyd died in a hospital after police officer Derek Chauvin put his knee around his neck for more than 8 minutes when he was arrested on May 25, together with 2 more officers that put their knee on the chest of the now deceased US citizen..