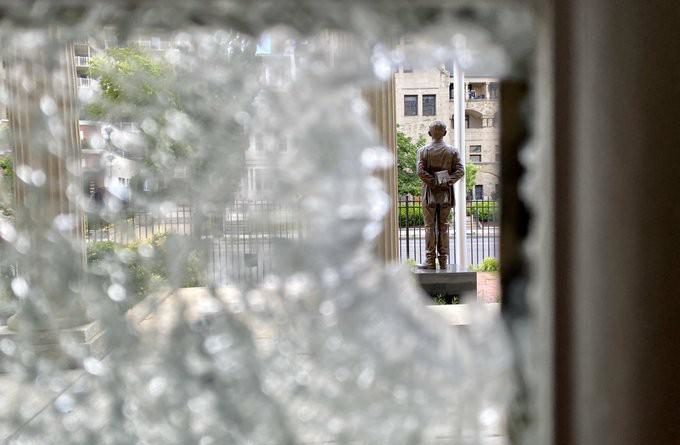 With unheard of cynicism, the Trump administration has returned Cuba to its list of countries that “do not collaborate” in the fight against terrorism. Unfairly included on the list for 33 years, the island was removed from it in 2015 by President Obama as part of his arrangements to begin normalizing relations with the island.  The author who selects the list is none other than the government that practices systematic state terrorism in the world, which dropped bombs on Hiroshima and Nagasaki, razed Vietnam, Korea, Afghanistan, Iraq and Syria and commits the crime of genocide with its unilateral blockades – being maintained intact or intensified during the pandemic – against Cuba, Venezuela, Iran, Palestine, North Korea and Syria. It is not by chance that the countries blockaded and those included on that list are almost the same. This is the government that with its terrorist incursions took the lives of 3,478 Cubans, left 2,999 disabled and caused considerable economic damage in Cuba after the revolution in 1959.

The arguments for putting the island back on the list are not serious and show Washington’s absolute disregard for international law. The stay in Cuba and the personal security of for members the National Liberation Army (ELN) members participating in the peace process are the responsibilities of the Cuban government as guarantor of the negotiations, which came about precisely at the request of Bogotá. It is another matter that Trump has ordered his Deputy President Duque to blow up the peace accord and request Havana to extradite these people.

The return to the list of countries involved in terrorism is part of the rampant media campaign of hate, aggression and lynching against Cuba that began shortly after Trump’s arrival in office, when control of policy toward the island was taken over by the Cuban-born extreme right. Most notably, Senator Marco Rubio. Secretary of State Mike Pompeo, Under Secretary Michael Kozak and the U.S. Embassy in Havana are all active in this campaign.

In the course of 2019 alone, 86 measures were adopted against Cuba; among them, the total activation of the extraterritorial Helms-Burton Act and the punitive actions against the companies involved in the transportation of vital fuel to Cuba. The purpose is the same as always: to make the people, suffocated by shortages, rise up against the government. Recently the head of the Southern Command accused Cuba of participating with Venezuela in drug trafficking, contrary to what the DEA’s own reports say.

In this climate of exacerbated hatred, the attack on the Cuban embassy in Washington with 32 AK 47 high powered rifle shots should come as no surprise. A Cuban émigré, Alexander Alazo, parked his truck on 16th Street Northwest, near the White House, got out of it with a Cuban flag which he tried to set on fire and then emptied the gun magazine against the facade of the diplomatic headquarters.  He then wrapped himself in a U.S. flag and peacefully turned himself in to the police. Interestingly, there has been no instance of the U.S. government making even a mention of the attack. Consider that at the time of the attack there were ten Cuban officials in the building.  Much less has Washington published an official expression of regret in the face of such a serious aggression, immediately and rightly described as a terrorist act by Cuba’s foreign minister Bruno Rodriguez Parrilla. Such a statement was an obligatory step by the host country after the attack. This follows from the practice of the most elementary decency and courtesy, but, above all, from the obligation of the host State to guarantee the security of the diplomatic premises located in its territory, as established by the Vienna Convention on Diplomatic Relations (1964). But decency and courtesy are not part of the corrupt political repertoire of Trump.

New elements of judgment on the background and socio-political environment of the shooter Alazo, provided on Tuesday 12th by the Cuban Foreign Minister Rodríguez Parilla are very suspicious.

Alazo, treated as a psychiatric case since his statement after the attack to the U.S. authorities, never manifested such disruption during his military service or in his pastoral activity on the island, nor once did he seem unstable in his dealings with consular officials. Even more suspicious is his insertion in a Protestant church in Miami, whose pastor, Frank López, is a close friend of Marco Rubio and Carlos Vecchio, Guaidó’s wannabe “ambassador”. A member of the congregation, Leandro Pérez, who claimed to be their “close friend” after the attack, has called for the murder of Raúl Castro and Cuban President Miguel Díaz-Canel. Something is very rotten in this case and the Trump government owes explanations, not only to Cuba, but to the diplomatic community in Washington and, of course, to the American people.

Featured image: Bullet hole at the Cuban Embassy in Washington