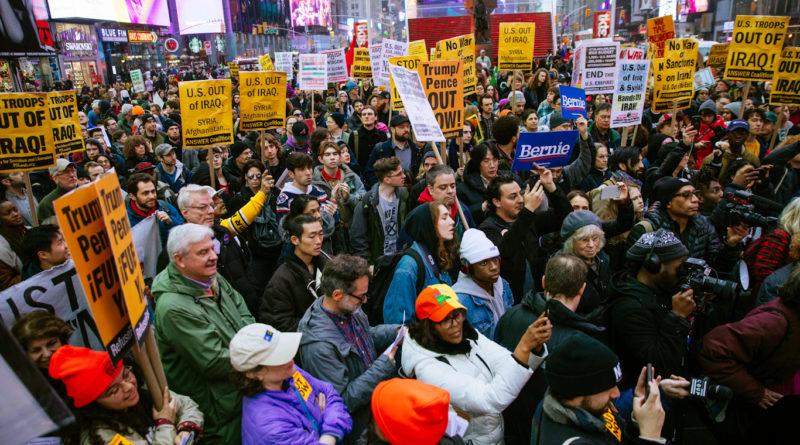 The weekend saw more than 70 spontaneous or hastily organized demonstrations across America in opposition to the Trump administration’s warlike actions against Iraq and Iran. On January 3, the United States carried out a drone strike in Baghdad that killed Major General Qasem Soleimani of Iran’s Islamic Revolutionary Guard Corps. Soleimani was commonly seen as one of the country’s most dynamic and influential leaders. After the government of Iraq voted in retaliation to expel U.S. forces, the president vowed to place sanctions on the already devastated country.

In response, Americans took to the streets across the country to register their opposition to the government’s actions. In Denver, protesters marched to the chant of “No justice, no peace. U.S. out of the Middle East.” Demonstrations also occurred in San Francisco, Minneapolis, Los Angeles, New York City and Chicago, among others, as anti-war groups like Code Pink, the Answer Coalition and Women Against Military Madness quickly mobilized.

Thousands in the streets of San Francisco today to say no to war, no to imperialism! Shut it down! pic.twitter.com/B5tNgPoOBK

Difficult to get a crowd estimate given this long strip, but I’m guessing at least a thousand showed up in Times Square. Not bad for something hastily organized. This movement will only grow. pic.twitter.com/ulrApTleqk
— Eᴅᴡᴀʀᴅ Cʜᴀᴍᴘɪᴏɴ (@drmabuse) January 4, 2020

In Los Angeles, former U.S. army veteran Mike Prysner warned the crowd about his own experiences:

“My generation went through the Iraq War. What did they teach us that you need to know now? That number one: They will lie. They will lie about why we need to go to war, just like they did then. They will lie to you. And guess what? When that war starts going bad for them, as it inevitably will, and a lot of us start dying, what are they going to do? They are going to keep lying and they are going to send more of you to die, because they don’t want to take responsibility. But they’re not getting their legs blown off or have any kids on the battlefield, so they don’t care.” In Washington, D.C. the protests took on a different form as speakers attempted to educate the crowd gathered about the U.S. role in the region. Journalist Max Blumenthal, a specialist in the Middle East, participated in the open air teach in, telling those gathered:

“Let me explain to you why Qassem Soleimani was killed. It is very simple: because he rolled back the Salafi Jihadi forces that the U.S., the CIA, had been backing in Syria to destabilize another independent country. He helped prevent, by organizing popular mobilization units, Iraq becoming another U.S. client state. It is that simple. And the assassination of Qassem Soleimani is revenge for his success in rolling back the most vicious imperial plot we have seen in recent years which sought to have the black flags of ISIS and Al-Qadea – the organization responsible for the 9/11 attacks – flying over Middle Eastern cities.”

.@MaxBlumenthal told 100s of anti war activists outside the White House today “why Qassem Soleiman was killed: He rolled back salafi jihadi forces the CIA had been backing in Syria to destabilize another independent state & he helped prevent Iraq from becoming a US client state.” pic.twitter.com/Bx0nakYRb2
— Wyatt Reed (@wyattreed13) January 4, 2020

RELATED CONTENT: Before the US Empire Collapses, It Could End Up Starting World War Three

The protests have not yet produced the scale of the huge Iraq War demonstrations of 2003, as the Democratic Party has failed to endorse any actions. Blumenthal took aim at them in his speech, claiming: In reality, however, a number of the most prominent Democrats on the insurgent left of the party have voiced their strong opposition to Trump’s actions. Presidential candidate Bernie Sanders said he would “take immediate steps to restrain President Trump from plunging our nation into yet another endless war,” going so far as to sponsor a bill to the effect.

When I return to Washington next week along with the U.S. Senate, I believe the first course of action is for the Congress to take immediate steps to restrain President Trump from plunging our nation into yet another endless war. pic.twitter.com/dSDeFMmEYT
— Bernie Sanders (@BernieSanders) January 4, 2020

War is a class conflict, too. The rich and powerful who open war escape the consequences of their decisions. It’s not their children sent into the jaws of violence.
It is often the vulnerable, the poor, & working people -who had little to no say in conflict – who pay the price. https://t.co/jlC35MYsQq

However, other Democrats have been far more bellicose towards Iran, even those that present themselves as leftists. Elizabeth Warren, for example, accepted without question the assertion that Soleimani was a mass murderer, her only gripe is that Trump’s actions were reckless, thereby implicitly endorsing a less gung ho assassination program against foreign leaders.

Soleimani was a murderer, responsible for the deaths of thousands, including hundreds of Americans. But this reckless move escalates the situation with Iran and increases the likelihood of more deaths and new Middle East conflict. Our priority must be to avoid another costly war.
— Elizabeth Warren (@ewarren) January 3, 2020

Meanwhile, one host of a nationally syndicated show on the liberal network NPR claimed that Soleimani’s assassination was “universally viewed as a good thing” in the U.S., underscoring the deep ideological divide between liberals and Democratic socialists like Sanders and Ocasio-Cortez.

While Trump was ordering thousands of extra troops to Iraq, protests against a feared war also took place across the world, for example in the United Kingdom, India, Turkey, Canada, the Philippines, Pakistan and across the Middle East. Millions of mourners came out for Soleimani’s funeral in Iran, turning the occasion into a show of strength. The coffin of Gen. Qassem Soleimani is carried on a truck surrounded by mourners during a funeral procession in Tehran, Iran, Jan. 6, 2020. Ebrahim Noroozi | AP

Thus, the weekend’s actions make clear that if President Trump does wish to push through a war with Iran he will meet stiff opposition both inside the Islamic Republic and at home.