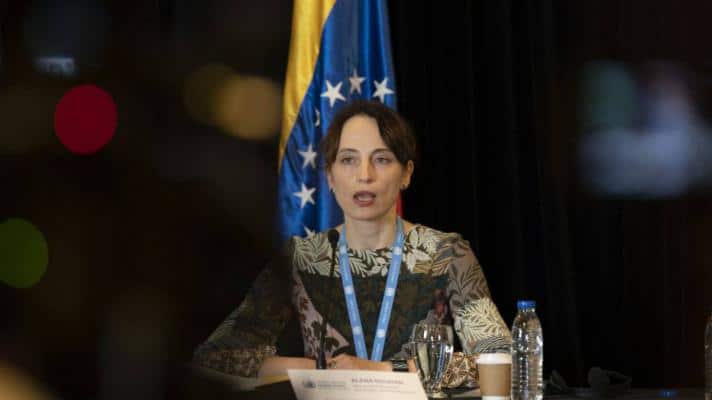 The Special Rapporteur of the United Nations (UN) on the effects of sanctions on human rights, Alena Douhan, held a press conference today before leaving Venezuela. Douhan detailed the impact of the United States’ unilateral coercive measures on the Venezuelan people.

Douhan reported that the unilateral “sanctions” violate International Law. The conclusion followed Douhan’s comprehensive report on damages caused by coercive measures implemented by Washington and its European partners against Venezuela, and specified that the final report will be presented to the UN in September 2021. Douhan urged the interlocutors to continue presenting additional material so that she can include them in her final report.

“The tightening of sanctions has undermined the potential impact of (economic) reforms as well as the capacity of the State to implement social projects,” the rapporteur said in summary.

During the conference, she specified that she met with President Nicolás Maduro, Vice President Delcy Rodríguez and the ministers of Foreign Affairs, Housing, Oil, Mines, Food, Gender Equality, Science and Technology, Transportation and Culture.

Likewise, she also mentioned that she had meetings and exchanges with the presidents of PDVSA, BCV, the Supreme Court, the Prosecutor and Attorney General, members of the National Assembly, the Ombudsman; representatives of the Venezuelan political opposition, unions, the Catholic church, human rights NGOs, health care personnel, independent investigators and victims of human rights violations.

“Venezuela has collaborated with all the information that we needed to be able to reach our conclusions,” she said.

Douhan urged the governments of the United Kingdom (Bank of England), Portugal (Nobo Bank) and the United States (Citi Bank) and all corresponding banks to unfreeze the assets belonging to the Venezuelan Central Bank to acquire medicines, vaccines, food, medical and other equipment, spare parts and other essential goods to guarantee the humanitarian needs of the people of Venezuela and the restoration of public services in collaboration with UNDP and other United Nations agencies, and through agreed-upon cooperative and oversight mechanisms.