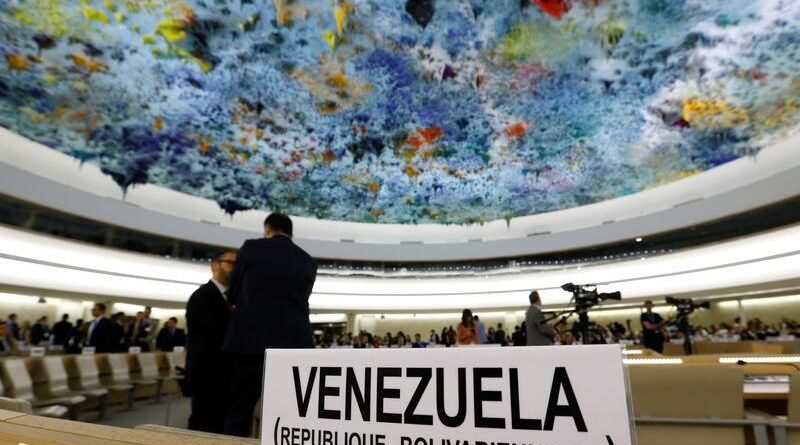 This is a biased politically motivated report of a dubiously independent mission that contributes to an already dangerously escalating situation where the victim is Venezuela and the perpetrator is the U.S. foreign policy.

Venezuela approaches another stage of its democratic process with the constitutionally mandated election for a new National Assembly (NA) on December 6. This will be the 26th election of any type in the country – presidential, municipal, state governorship, referendums – in the last 20 years. The National Assembly that was elected in 2015 had a majority of members from the opposition parties, however it was declared in contempt by the Supreme Court of Justice for serious irregularities including swearing in of members who had committed fraud. In January 2019 Juan Guaidó, as president of the NA in contempt, appointed himself president of Venezuela, rejecting the legitimacy of President Nicolas Maduro who was elected with over 65% of the votes in 2018. The U.S. government, the government of Canada, and a number of European and Latin American governments recognised Juan Guaidó as “interim president”.

This brief recap of events underscores the importance of the December 6 election with the participation of several opposition parties. Should the new NA have a majority of parliamentarians who recognise the legitimacy of Nicolas Maduro, and elect a new NA president, then Juan Guaidó could not use his U.S.-granted “right” to claim the country’s presidency. A right that is not constitutional. This will definitely be the likely scenario since the pro-Guaidó parties are boycotting the election. Regardless, the U.S. and its allies have no interest in allowing a legitimate election to take place in Venezuela, which explains the increasing aggressive activity against the Bolivarian Revolution. The aggression has included the recent plot of an attack on a Venezuelan oil refinery by a U.S. citizen and former CIA operative who has been arrested by the Venezuelan authorities together with other individuals.

Coincidentally or not, U.S. Secretary of State Mike Pompeo has recently traveled to four South American countries: Suriname, Guyana, Brazil, and Colombia. The visits to the first two smaller countries may have had secondary interests in securing business deals and to prevent investments from China. But it has been suggested that the visit to Guyana may also be part of the U.S.’ “maximum pressure” strategy to oust Venezuelan President Nicolas Maduro. On the other hand, Pompeo’s visit to Brazil and Colombia is clearly an indication that the U.S. obsession to remove Maduro is reaching a fever pitch intensity.

The U.S.’ threatening actions against a sovereign country are certainly to be criticised but they are regrettably consistent with the profile of the hegemonic empire prone to wage hybrid wars on different countries. Venezuela is a prime country for U.S. interests.

Nevertheless, what analysts should be especially concerned about is that the United Nations Human Rights Council (UNHRC) may be contributing to U.S. aggression towards Venezuela.

The UN has not recognised Juan Guaidó on the basis that states, not governments, are UN members. But a recent report by a so-called UN International Independent Mission on Human Rights was issued September 15, which accuses the government of Nicolas Maduro of committing crimes against humanity supposedly committed since 2014. This plays fully into the hands of Juan Guaidó with the additional aggravating point of potentially giving the wrong idea to the U.S. for a military intervention.

In reality, this is a mission that was never recognised by the Venezuelan government, and as stated in their report, never received approval for such a human rights investigation. The reason for this is that Venezuela is already working in coordination with the Office of the High Commissioner for Human Rights, which has an office recently opened in Venezuela. In fact, The UN office in Venezuela has made 15 visits to 14 detention centers in the last year, recognised by the High Commissioner Michelle Bachelet herself, in which they have been able to conduct confidential interviews, in the context of the collaboration offered by the Venezuelan state. But none of these findings were part of the report by the “independent mission”.

On the contrary, the mission reports “that it was not able to visit Venezuela and undertake in-country fact-finding” with the implication that no cross-examination was ever conducted. Nevertheless, it reports very serious accusations of extrajudicial executions, forced disappearances, arbitrary arrests, “and other cruel, inhuman or degrading treatment committed since 2014.” Some of the sources used include highly questionable organizations such as Human Rights Watch, and a Venezuelan group called Venezuelan Observatory of Social Unrest (OVCS) that seems to keep its own register of unproven “crimes” and “protests” in Venezuela with its own statements of “repression from the Nicolas Maduro regime.” These are hardly unbiased sources of information.

The 411-page-long report has been rejected by Venezuelan Foreign Minister Jorge Arreaza, who stated on his Twitter account that it is, “A report plagued with falsehoods, prepared remotely, without any methodological rigor, by a phantom mission directed against Venezuela and controlled by governments subordinate to Washington; it illustrates the perverse practice of engaging in politicising human rights and not in doing human rights politics.”

A detailed deconstruction of the report has been made and this author agrees with its conclusions. The report speaks of “arbitrary detentions” of individuals for their political affiliation. How can even this be credible when the most visible opposition group, led by self-appointed Juan Guaidó, is free on the streets of Caracas, on social media, and print press?

The report also uses arguments – unrelated to human rights – that can be construed as interference in the internal affairs of Venezuela when it states that the National Constituent Assembly of Venezuela is illegitimate. This is precisely the same argument used by the U.S. government and its political allies like Canada.

Similarly suspicious is the report’s questioning of “concessions expropriated from international companies” in the Mining Arc Region of Venezuela. What is the relationship between internationally granted rights to expropriations, and violation of human rights that have not even been fully investigated by its own admission, “The Mission was unable to investigate [the numerous violations] due to time and resource constraints.”

Finally, the unexpected publication of this report at a time when the Venezuelan government is gearing up for a democratic election for the National Assembly on December 6 is hardly coincidental. The report has the distinctive features of a political attempt to invalidate an electoral process that the pro-regime change proponents are already interfering with in order to undermine the legitimate government of Nicolas Maduro.

This is a biased politically motivated report of a dubiously independent mission that contributes to an already dangerously escalating situation where the victim is Venezuela and the perpetrator is the U.S. foreign policy. The UNHRC should not be party to it.