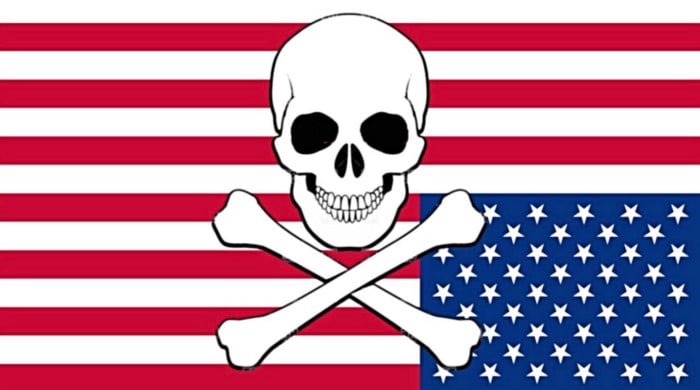 The Iraq invasion was a prelude to our current war runup, the war runup that the United States would experience when its global imperial hegemony came under threat during the 2020s. Like was the case in 2003, the empire’s propaganda machine has inculcated its narratives into the minds of a solid majority of the public. Like was the case in 2003, the main target of the empire’s violent rage is merely a scapegoat for the crises that the U.S. has been experiencing. The difference is that in 2020, America’s cultural psychosis is being directed towards preparing for a war far larger than the Iraq War, a war so destructive and costly that it could end up breaking U.S. hegemony for good.

In every other way, the nature of America’s imperial reaction and self-destructive spiral has grown larger in these last seventeen years. Amid 9/11, the country was experiencing a crisis of violence terrorist blowback as a consequence of Washington’s imperialist provocations. In the 2020s, the country is experiencing a health crisis that’s so far killed over 200,000 Americans, along with the largest economic crash in a century. In 2003, the empire’s campaign to blame Saddam Hussein for 9/11 led to a war that’s since resulted in a decline for Washington’s global legitimacy and a fading of American hegemony. In 2020, the empire’s campaign to blame China for Covid-19 is creating geopolitical escalations that are making the U.S. far more isolated, and that will result in true imperial devastation if they end up leading to an actual U.S.-Chinese military confrontation.

The sense of delusion among the U.S. populace has also been heightened, morphing into bizarre and alarming forms as the contradictions of imperialism bear down upon American society. The “China virus” slogan propagated by the president and by reactionary media has no basis in a fair or objective analysis; China’s Covid-19 response has proven to be among the best in the world, and Trump’s negligence has been to blame for the unparalleled pandemic deaths the U.S. has experienced. But imperial hubris has compelled most of the country to feed into the anti-Chinese hysteria, while consequently propping up the neoliberal paradigm that’s bringing so much death and destruction to the U.S. population.

RELATED CONTENT: Guo Wengui – So Anti-Chinese That Even US Establishment Cannot Stomach Him

Most of the country is participating in this reactive delusion because virtually every U.S. political faction, apart from principled communists, has an ideological interest in slandering China. Even many of the leftists who don’t believe China is to blame for the virus are reinforcing the other lies that the anti-Chinese cold war depends on.

The lies about how China is detaining and persecuting “millions” of Uyghurs have served as the main narrative which unites the empire’s masses in hating China and its socialist government. After being repeated by virtually every popular facet of English-speaking media, from Last Week Tonight with John Oliver to the Joe Rogan Experience to Honest Trailers, the “China is committing genocide” line has come to serve as the way that all imperial chauvinists can engage in projection over the actual genocidal crimes that their own country has committed. Among these imperial chauvinists are many anarchists, “democratic socialists,” and other types of anti-Marxist leftists who seek to vilify China in order to discredit Marxism-Leninism.

Which shows the magnitude of the ideological roadblocks that this imperialist cultural reaction has created for the rise of a socialist movement in this country. If even many of the people in the U.S. who describe themselves as socialists vilify socialist countries like China, and are willing to promote the U.S. State Department lies that further Washington’s interests, what does this show about the prospects for building a movement within the U.S. that can address the continent’s imperialist and colonialist contradictions?

I believe it shows that before the empire can be defeated, its contradictions will have to be exposed in far more severe ways. This country and its economic system are built upon the genocide of colonized peoples, the exploitation of populations abroad, and (especially since 9/11) the perpetuation of endless wars. The American psyche, particularly the psyche of the settler masses, is historically intertwined with an order where the relative comforts enjoyed by those within the empire come at the cost of millions routinely getting killed off or forced to work in miserable conditions. The desire to benefit from empire is so strong that it’s kept many of the American people on the side of the capitalist reaction, even amid mounting capitalist contradictions within the country.

And as is explained in J. Sakai’s brilliant Settlers: The Mythology of the White Proletariat, even self-identified socialists in the U.S. have historically been complicit in the crimes of colonialism; it’s been in their interests as members of the labor aristocracy to forsake true proletarian consciousness and remain tethered to petty-bourgeois reformism.

Under neoliberalism, those who can legitimately consider themselves part of a labor aristocracy has greatly shrunk, and this year’s depression has driven even more people out of a bubble of economic privilege. But as is reflected by U.S. culture’s overwhelming acceptance of imperialist lies like the Uyghur claims, a coordination towards serious anti-imperialist resistance has yet to emerge within the country, at least on a scale that immediately threatens the power structure. The protests of the last four months, while fueled by rising anger at colonial state violence and neoliberal capitalist injustice, aren’t united around a cohesive revolutionary line that involves overthrowing the capitalist state. So the forces of reaction, with their lies about countries like China and their stoking of racism and xenophobia, are still able to dominate the societal narrative.

Yes, the foundations of the U.S. capitalist machine may be falling out, but the American desire to violently dominate and subjugate remains. The reactionary segments of society are concluding that the solution to their growing economic deprivation is not to establish socialism, but to expand imperial control and annex territory from U.S. rivals. This is why Trump’s base would be delighted if he were to invade Venezuela, and then replace Maduro with a neoliberal U.S. puppet regime which serves American capitalist interests. Reflecting the old white aristocratic desires for imperial annexationism, they see the wars for imperial hegemony as tied in with their own material wellbeing.

Thus the accompaniments of this year’s increasing U.S. sanctions, dronings, and bombings with runups towards war with all of Washington’s largest challengers. Continued anti-Russian war games, military encroachments towards China, militarization of Latin America’s right-wing regimes in preparation for war with Venezuela, and recently Iraq War-style propaganda about Iran have all been part of the imperialist reaction.

Whether or not the U.S. actually decides to start a war with one of these countries-which wouldn’t be surprising given the irrational measures that dying empires often resort to-these war campaigns will continue to further America’s internal crises. Self-destructive economic isolationism from China, growing austerity in order to further expand the military budget, and stunted class consciousness among the masses as a result of constant war propaganda are all working to drive U.S. living conditions ever downward.

Our only hope is to harness the country’s spiraling capitalist and imperialist contradictions towards building a movement that can take down the empire, a movement that applies the findings of Marxism to our conditions. We need to agitate among the people, showing them why capitalism and imperialism are behind these crises and persuading them to join organizations that can work as facets of the revolutionary vanguard. Those who’ve already chosen to help feed into the American imperial reaction likely won’t join us. But if we don’t take charge, the empire’s psychosis will continue to be able to wreak destruction unchecked.

Featured image: The above image was found from comrade Hakim’s video “America Never Stood For Freedom.”