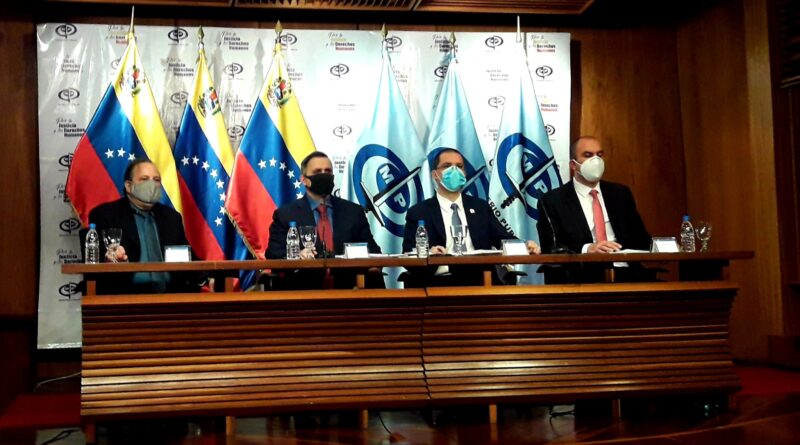 The report that the Venezuelan State presented this Wednesday was made “on the spot” by Venezuelan experts from the Public Ministry (MP), Ombudsman’s Office (DP) and different human right groups, demonstrates Venezuela’ firm adherence to the preservation of life, the Chancellor of the Republic, Jorge Arreaza announced.

This report called “The truth of Venezuela against the infamy of the Lima Group,” a document that systematizes the human rights violations committed by those who promote violence against the country and the effective response of the Venezuelan State, is in contrast to the report prepared by supposed paid “experts” from an “independent” international mission to defame the Venezuelan state.
In this sense, Foreign Affairs Minister Jorge Arreaza stressed that the Venezuelan state has acted firmly against officials who violate human rights during opposition protests.

“In Venezuela, any excess that officials may have committed during the fulfillment of their functions has been investigated,” stressed the Venezuelan diplomat from the MP headquarters in Caracas, where the details of this report, containing more than 100 pages, were provided.

The Foreign Affairs Minister announced that once presented, it will be signed and delivered to the head of state, as well as to the representative in Venezuela of the Office of the High Commissioner for Human Rights, Michell Bachelet.

Regarding the de facto report of the mission of alleged human rights experts, he pointed out that it was aimed at “dynamiting and imploding the work done by the Office of the United Nations High Commissioner for Human Rights ( . . .) It is a text prepared by an ad hoc commission paid by the Lima Group which, as we well know, is an enemy of the people of Venezuela,” he declared.

In reference to the report presented by an “independent” UN mission, he emphasized that they made a political and methodological error during the investigation, in response to which he asked the media for rigor in handling the information.

“Unlike Chile, where people protested against the increase in public services, not like in Venezuela where in 2014 and 2017 they were insurrectionist,” Arreaza recalled.

In this context, he added that there is a UN representation that watches over human rights and is located in Venezuela “and has increased its presence in the country; we maintain constant cooperation and communication with them.”

“The UN Human Rights Council has 47 States elected within the United Nations. Venezuela is part of it,” he said.

He mentioned how, on September 27, 2019, an unnecessary resolution was presented. “Let us not confuse the work of the High Commissioner with this obscene Lima Group report. In the latter there was a vote, there were 19 votes in favor and 21 abstentions.

The countries voting — in 2019 — in favor of the resolution for the contested report were Argentina, Australia, Austria, Brazil, Bulgaria, Chile, Croatia, Czech Republic, Denmark, Hungary, Iceland, Italy, Japan, Peru, Slovakia, Spain, Ukraine, United Kingdom, among others. “Countries that do not recognize the legitimate government,” he said, although the reality changed in Argentina at least with the arrival of Alberto Fernández.

“This is not said in international agencies because they decontextualize the information,” dthe head of the country’s foreign relations said. It is a multiform and multidimensional attack, he said, “against our country by cartelized countries and those related to the United States. It is unprofessional to ignore this.”

Mercenary report was based on secondary sources

In the alleged investigation sponsored by the Lima Group, not a single piece of information was requested from national authorities. Lacking official data, the report that was presented at the UN cannot have any validity, the Foreign Affairs Minister said while revealing that [the report was] based on publications on social networks and in national and international media servile to the world right, to defame the performance of the Bolivarian government in the field of human rights.

“85 percent of the sources used by the alleged fact-checking commission are secondary. There are no interviews of relatives or testimonies. Only 15 percent is valid” information that, he assured, should be in the hands of the UN High Commissioner for Human Rights, Michelle Bachelet.

He took as an example the case of deputy Juan Requesens. “In videos we presented, he said that his rights were respected at all times.” The sources used in the alleged report were taken in 83 percent from social networks and digital media, he said. Meanwhile, regarding Leopoldo López, 43 percent of the sources reviewed were digital media and 35 percent social networks.

“We cannot endorse an attack of this magnitude against Venezuela . . . The State has an obligation not to validate a resolution backed by countries that do not recognize us.”

For his part, the Attorney General, Tarek William Saab, said that one of the chapters of the new State report highlights the role of the Public Ministry in investigating human rights violations and in that sense he referred to the Barlovento Massacre.

“It was thought that there would be impunity, quite the opposite. There was an exemplary sanction in accordance with the provisions of the Penal Code. The contested report does not say that,” the Attorney General added.

In that order, he also explained that 603 State security officials, identified as allegedly responsible for human rights violations, and 35 civilians implicated as collaborators in these events, have been charged. This, he said, accounts for a total of 638 defendants for the crimes of homicide, torture, cruel treatment, inhuman or degrading treatment, illegitimate deprivation of liberty, home violations, among other crimes contemplated in Venezuelan law.

Likewise, a total of 452 law enforcement officials from different agencies and 24 individuals have been apprehended, for a total of 476 deprived of liberty, a total of 811 officials and 129 civilians were accused, making a total of 940, through the presentation of 382 accusations filed by specialized prosecutors in the matter.

A total of 127 State security officials and 13 civilians, for a total of 140 are already convicted, he continued.

“The president of the contested Mission, Marta Valiñas says that in the Barlovento Massacre there are 5 missing people who still have not been found. “Could you give us the names?” asked the Prosecutor. “However, they don’t give names,” he said.

“Valiñas says there are reasonable reasons to believe” that there are human rights violations in Venezuela. This terminology does not exist in national or international law.

On the other hand, the Ombudsman, Alfredo Ruiz, recalled that after 20 years of the creation of the Office — during President Hugo Chávez’s presidency –– people with complaints on the subject of human rights are received daily. “Despite the pandemic, this year we have dealt with more than 6,000 complaints.”

He stressed that the report on human rights that Venezuela is presenting not only demonstrates the character of adherence to the guarantee of life in the most difficult situations, “but collects the opinion of several institutions as a whole, as well as recommendations that will be presented to the President of the Republic.”

Finally, Foreign Affairs Minister Arreaza reiterated that the sanctions against Venezuela are the most bloody violation of human rights that can exist because the Venezuelan State is prevented from importing necessary medicines and food.

The Commissioner for Human Rights, Larry Devoe, was also present at the press conference.